And it kind of rules. 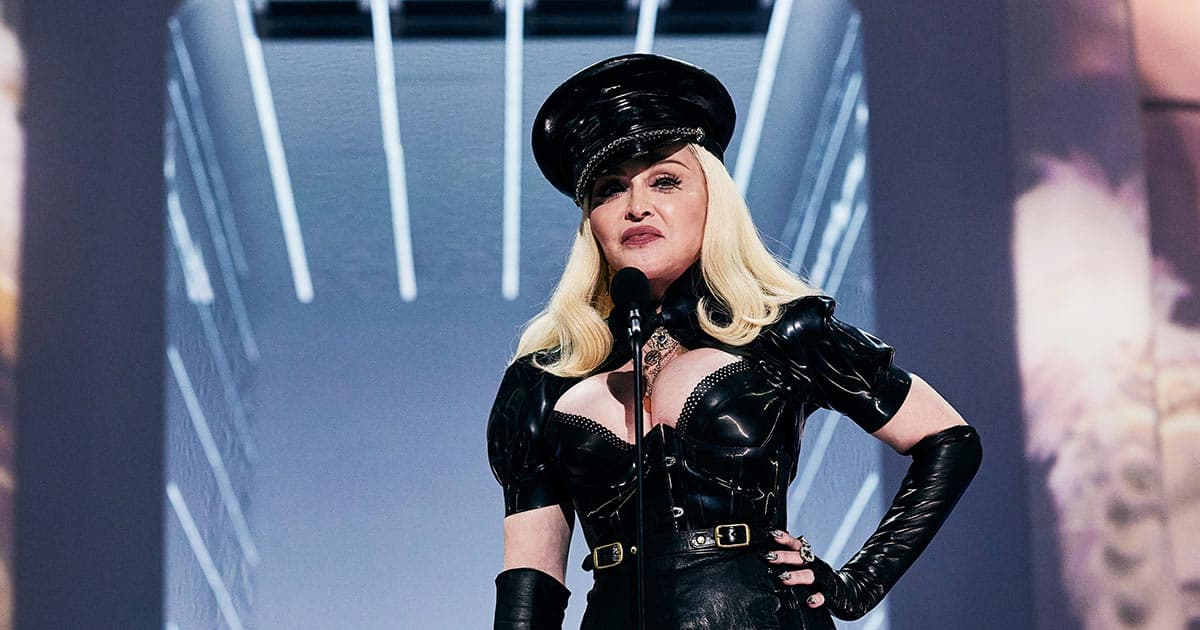 Let's cut to the chase: On a scale of 1 to Ozzy Osbourne, Madonna "Madonna" Ciconne's NFT scheme is maybe the least bad celebrity entrant into the space we've seen so far.

The Material Girl herself released a collection of three porny video NFTs that'll be auctioned off for charity. Proceeds from the collection, titled "Mother of Creation," will go to the charities Voices of Children, City of Joy, and Black Mama's Bail Out initiative.

One clip depicts animated fembot Madonna giving birth to a very large tree out of her 3D modeled vagina. Another shows a robot centipede crawling from the same anatomical location. The third features a beautiful swarm of butterflies coming from the "Like A Virgin" singer's perfectly animated body as blonde hair cascades down her naked back.

"In my hallucination I saw my beloved's flower garden," a sultry Madonna croons as she literally becomes a human centipede. "I saw myself as the source of existence. I  was there in the beginning."

As of this writing all three are going for about $30,000 on SuperRare, a crypto art marketplace.

Through Instagram posts and interviews about the collection, Madonna has made it pretty clear she imagines herself birthing creativity and crafting art for charity. Yet most of the news coverage around the collection, designed by an artist known as Beeple — who you may remember as having sold the most expensive NFT ever last year — has been pretty negative. Headlines accuse Madonna of being raunchy, focusing on the nakedness and not, you know, the millions of dollars people lose to crypto hacks and scams all the time.

On one level, sure. The crypto market is full of grifters and tons of tenuously middle class investors are losing their shirts as we speak. And its environmental toll isn't so great, either.

But Madonna's just having fun, she's collaborating with a talented artist, and she's donating all the proceeds to worthy causes. Plus, compared to most NFT art, this stuff is pretty fun.

That's not surprising, because she has a good eye. She posts weird shit on TikTok that evokes the collection all the time. Again, we're talking about a woman with a whole song titled, "Bitch I'm Madonna," and who kissed Britney Spears on stage. You'd think society would stop seeing a mature, consensually naked female body as shocking and instead focus on the financial danger crypto investors may be in — you know, a real threat.

Madonna is hot. Her NFTs are hot. Body shaming is boring.

These NFTs are more artistic than templated ugly animals in hats, so what's with all the fuss?

More on crypto news: Coinbase Says If It Goes Bankrupt, It Might Seize Users' Crypto

Read This Next
Brands We Love
If You’re Ready To Invest in Crypto, Here’s the Best Place To Start
From Our Partners
Learn A New Computer Language With This Coding & Engineering Bundle Sale
From Our Partners
Master The Blockchain With 40% Off These FinTech Training Classes
Brands We Love
BlockFi Is a $3 Billion Startup That Lets You Earn Compound Interest on Crypto
From Our Partners
Learn How Blockchain Underpins Modern Finance With This Training Bootcamp
More on Sci-Fi Visions
From the Dept. of...
Monday on futurism
The Best Humidifiers of 2023
Human v. Giraffe
Jan 24 on the byte
Chaotic Italian Fashion Line Baffles Facial Recognition Software
Step One
Jan 24 on the byte
World’s Third Richest Person Says He’s Developed "Addiction" to ChatGPT
READ MORE STORIES ABOUT / Sci-Fi Visions
Keep up.
Subscribe to our daily newsletter to keep in touch with the subjects shaping our future.
+Social+Newsletter
TopicsAbout UsContact Us
Copyright ©, Camden Media Inc All Rights Reserved. See our User Agreement, Privacy Policy and Data Use Policy. The material on this site may not be reproduced, distributed, transmitted, cached or otherwise used, except with prior written permission of Futurism. Articles may contain affiliate links which enable us to share in the revenue of any purchases made.
Fonts by Typekit and Monotype.