"Girl what am I recycling for." 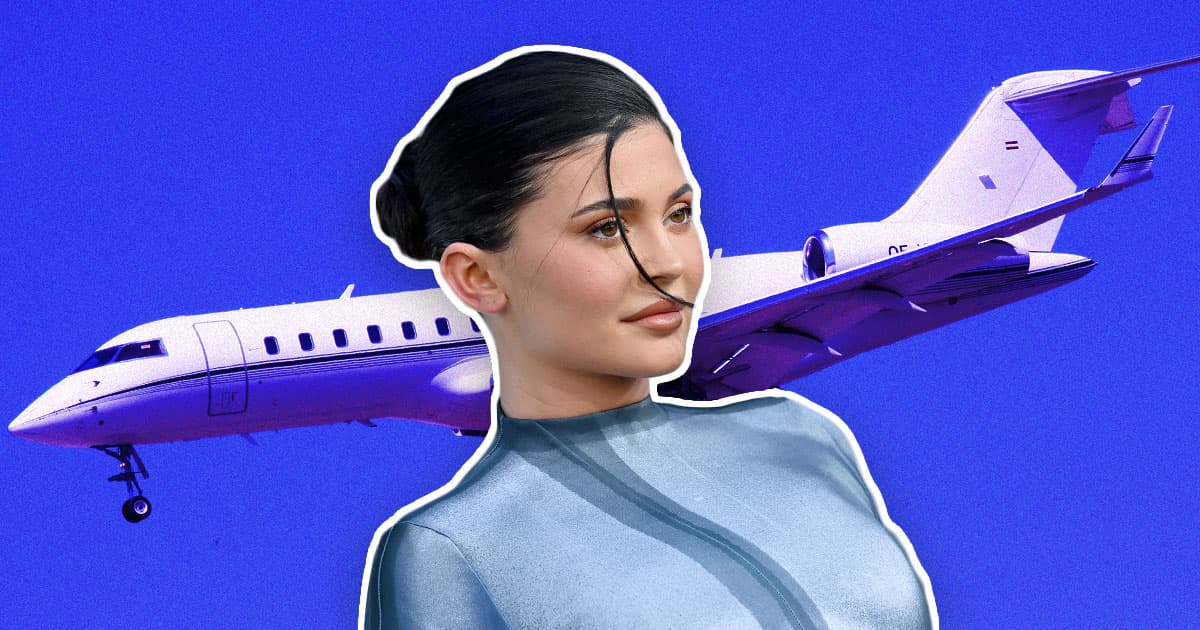 Look, we won't not say that Los Angeles traffic is the stuff of the devil. Still, no matter how terrible it gets, it's pretty difficult to justify opting for a 17-minute trip on a private jet over sucking it up for a 45-minute drive.

Kylie Jenner, "self-made" billionaire of Kylie Cosmetics and general Kardashian clan fame, has come under fire for doing exactly that. Last week, Jenner posted a luxe Instagram photo of herself and her partner, rapper Travis Scott, holding each other in front of two massive private jets, complete with the caption: "you wanna take mine or yours?"

A few days after the picture was posted, the Twitter account @CelebJets — created by the same teen who tracks Elon Musk's flights — revealed that according to public flight records, Jenner's jet had recently flown for less than 20 minutes.

The collective KarJenner Instagram presence is nothing short of constant flexing. But as fires rage, glaciers collapse, and temperatures rise around the world, this particularly short flight seemed to strike a nerve — the Internet was quick to label Jenner a "climate criminal," ultimately sparking larger questions about climate accountability, personal responsibility, wealthy inequality and more.

Instagram users took to the comments to denounce the star, vocally outraged by the apparent lack of individual care for the environment.

"Why do I have to limit my meat consumption and use paper straws while the 1 percent gets to pump tons of carbon into the atmosphere for a day trip to Palm Springs?" read one fiery comment.

"Girl what am I recycling for," asked another.

These critics have a point. In recent years, private jets have soared in popularity among the elite, and citing a report from the European Federation for Transport and Environment, The Washington Post pointed out that private jets are between five and 14 times more polluting than commercial air travel, not to mention 50 times more environmentally destructive than trains.

Again, no one's arguing for the hell of LA traffic. But parts of the world are literally on fire, and without collective action — key word collective — there's little hope for our Pale Blue Dot. As another Instagram commenter put it: "This isn't the flex you think it is."

Read This Next
Disease Dilemma
Study: Climate Change Making More Than Half of Infectious Diseases Far Worse
Back Online
Japan May Need Nine Nuclear Reactors Turned On to Get Through Winter
Unreliable Friends
Archipelagic Nation Sick of Other Countries Breaking Climate Change Promises
The Kids Won't Be Alright
Elon Musk Warns That Humankind Will "End Up in Adult Diapers"
Circle of Life
Hooray! The Great Pacific Garbage Patch Has Become a Thriving Ecosystem, Scientists Say
More on Earth & Energy
Crude
4:30 PM on futurism
Researchers Still Finding Residue From Massive 2010 BP Oil Spill
Dried Up
Yesterday on the byte
Rangers Keep Discovering Human Remains in Drying Up Lake
Kapow
Monday on the byte
Gigantic "Jet" Lightning Bolt That Reached Edge of Space Puzzles Scientists
READ MORE STORIES ABOUT / Earth & Energy
Keep up.
Subscribe to our daily newsletter to keep in touch with the subjects shaping our future.
+Social+Newsletter
TopicsAbout UsContact Us
Copyright ©, Camden Media Inc All Rights Reserved. See our User Agreement, Privacy Policy and Data Use Policy. The material on this site may not be reproduced, distributed, transmitted, cached or otherwise used, except with prior written permission of Futurism. Fonts by Typekit and Monotype.