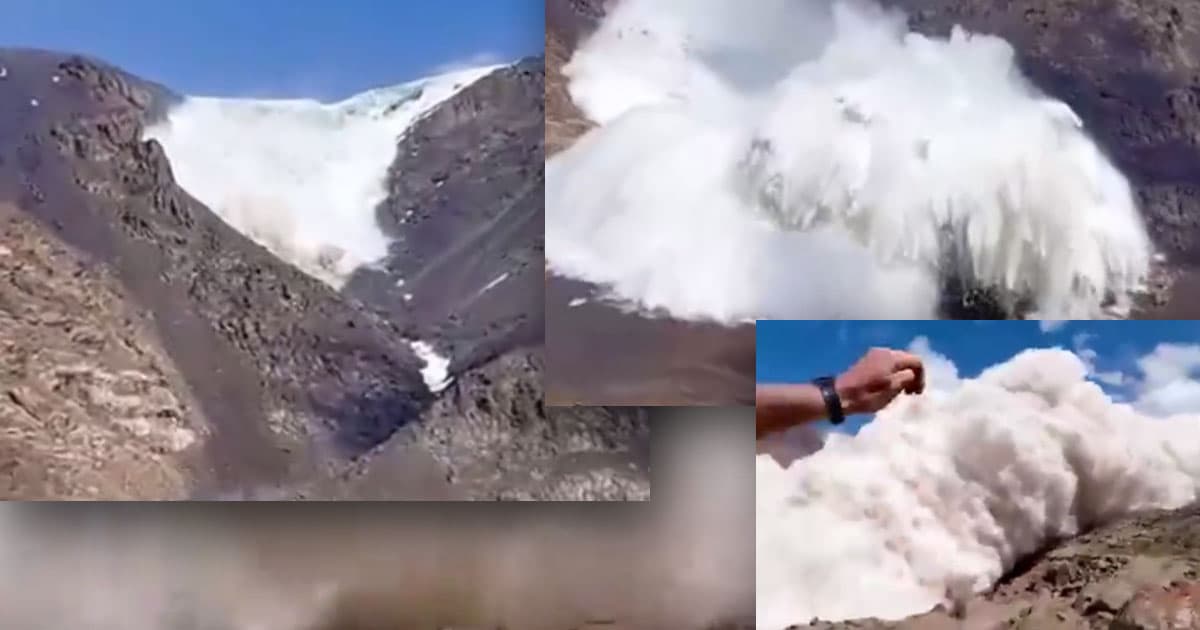 A group of ten tourists miraculously survived a massive avalanche while exploring Kyrgyzstan's Tian Shan mountains — and one even managed to capture the harrowing experience on film.

The terrifying incident was recorded by Guinness world record holder for most backflips in one skydive, Harry Shimmin, who shared the viral clip on Instagram.

"We'd just reached the highest point in the trek," read the post. "While I was taking pictures I heard the sound of deep ice cracking behind me."

A hiker filmed the terrifying moment he and nine others were caught in an avalanche in Kyrgyzstan. Astoundingly, everyone survived.

"If we had walked 5 minutes further on our trek, we would all be dead," the hiker wrote on Instagram. pic.twitter.com/dupAFCDL2w

The adventurers — a group that included one American — were incredibly lucky. According to Shimmin's account, just a few extra minutes may have spelled the end.

"The whole group was laughing and crying, happy to be alive," the Instagram caption continued. "If we had walked five minutes further on our trek, we would all be dead."

Fortune hasn't been so fair to other recent travelers. Just last week, a glacier collapse in the Italian Alps killed at least seven and left several others wounded or missing — an incident that, like the one this weekend, was likely a result of glacier-depleting climate change.

"The world is facing global climate change, which is fraught with dangerous consequences," Zhaparov said in a June interview with The Independent. "This is especially true for us mountain countries because these problems are more dynamic and specific: glaciers melting and natural water reserves decreasing, which can lead to imminent disaster."

Case in point: Shimmin's video, while remarkable, isn't exactly inspiring. Instead, it's a cautionary tale of environmental terror. Anyone planning a wintry mountain trek may want to reconsider.

More on climate policy: Supreme Court Gives Power Plants Green Light to Pollute as Much as They Want

FROM THE DEPT. OF THINGS TO BUY
Best Video Editing Software for Mac of 2022
Apr 5
Read More
From Our Partners
Master The Adobe Creative Cloud With This Cyber Week Training Bundle Deal
12. 5. 21
Read More
From Our Partners
Save 15% On A Spade Mini Ear Wax Remover In This Pre-Black Friday Sale
11. 7. 21
Read More
+Social+Newsletter
TopicsAbout UsContact Us
Copyright ©, Camden Media Inc All Rights Reserved. See our User Agreement, Privacy Policy and Data Use Policy. The material on this site may not be reproduced, distributed, transmitted, cached or otherwise used, except with prior written permission of Futurism. Articles may contain affiliate links which enable us to share in the revenue of any purchases made.
Fonts by Typekit and Monotype.