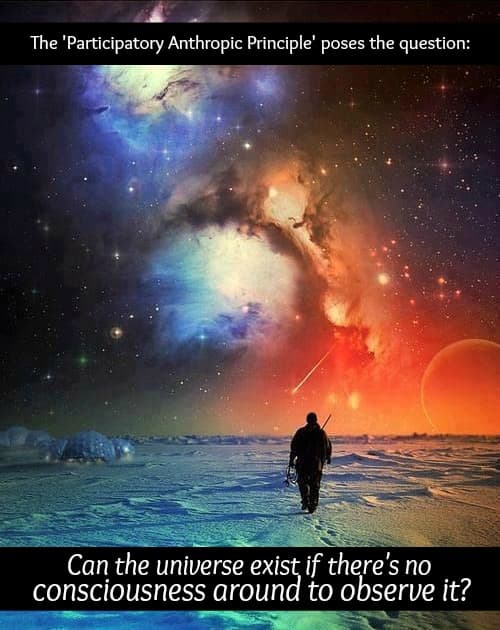 John Archibald Wheeler (1911-2008) was a scientist-philosopher who introduced the concept of wormholes and coined the term “black hole”. He pioneered the theory of nuclear fission with Niels Bohr and introduced the S-matrix (the scattering matrix used in quantum mechanics). Wheeler devised a concept of quantum foam; a theory of “virtual particles” popping in and out of existence in space (similarly, he conceptualized foam as the foundation of the fabric of the universe).

Besides his extraordinary contributions to the field of theoretical physics, Wheeler inspired many aspiring young scientists, including some of the greats of the 20th century. Among his doctoral students were Richard Feynman, a Nobel Prize laureate, with whom he coauthored the “Wheeler-Feynman absorber theory”; Hugh Everett, who proposed the many worlds interpretation; Kip Thorne, who predicted the existence of red supergiant stars with neutron-star cores; Jacob Bekenstein, who formulated black hole thermodynamics; Charles Misner, who discovered a mathematical spacetime called Misner space; Arthur Wightman, the originator of Wightman axioms; and Benjamin Schumacher, who invented the term “qubit” and is known for the “Schumacher compression”. The list could go on.

Wheeler had a reputation pushing his students into a place where logical thought would not necessarily take them. Former student Richard Feynman, to Kip Thorne, declared, “Some people think that Wheeler’s gotten crazy in his later years, but he’s always been crazy!” [Reference: Princeton] Wheeler was willing to make a fool of himself, to go anywhere, talk to anybody, and ask any question that would get him closer to understanding “how things are put together.”

Wheeler believed that the real reason universities have students is to educate the professors. But to be educated by the students, a professor had to ask good questions. “You try out your questions on the students”, he wrote, “If there are questions that the students get interested in, then they start to tell you new things and keep you asking more new questions. Pretty soon you have learned a great deal.” [Reference: Cosmic Search Vol. 1 No. 4]

Wheeler had a fantastic sense of humor. Often he engaged in Koan-like expressions that puzzled and amused his listeners. He saw beauty in strangeness and actively sought it out. He declared, “If you haven’t found something strange during the day, it hasn’t been much of a day.”

John Archilald Wheeler was born on July 9, 1911, in Jacksonville, Florida, into a family of librarians. At 16, he won a scholarship to Johns Hopkins University. He graduated five years later with a Ph.D in physics. A year later he got engaged to Janette Hegner. They stayed married for 72 years.

In 1933 in an application for the National Research Council Fellowship to go to Copenhagen and work with Neils Bohr, Wheeler wrote: “I want to go to work with Neils Bohr because he sees further than any man alive.” Bohr and Wheeler published their first paper in the late 1930s, explaining nuclear fission in terms of quantum physics. They argued that the atomic nucleus, containing protons and neutrons, is like a drop of liquid, which starts vibrating and elongating into a peanut shape when a neutron emitted from another disintegrating nucleus collides with it. As a result, the peanut shaped atomic nucleus snaps into two.

In 1938 Wheeler started teaching at Princeton University. In 1941 he interrupted his academic work to join the Manhattan Project team (which included the likes of Feynman, Bohr and Albert Einstein - with Marie Curie helping lay out the blueprints) in building an atomic bomb. Wheeler considered it his duty to help with the war effort, but the atomic bomb wasn’t ready in time to end the war and save his beloved brother, who died in Italy in 1944.

After the war ended, Wheeler returned to Princeton and taught Einstein’s general theory of relativity, which at a time was not considered a “respectable” field of physics. Wheeler’s classes were exciting – one of his tricks was to write on chalkboards with both hands. He frequently took his students to Albert Einstein’s house in Princeton for discussions over a cup of tea.

Wheeler co-wrote the most influential textbook on general relativity with Charles W. Misner and Kip Thorne. It was called Gravitation. While working on mathematical extensions to the theory, Wheeler described hypothetical “tunnels” in space-time which he called “wormholes”. He was not the first scientist to think of the possibility of wormholes, or even black holes, but he established the idea. In this regard, it’s worth noting that Democritus, an ancient Greek philosopher, suggested that matter was composed of atoms, which was “mainstreamed” by John Dalton’s discovery of atoms 2000 years later. In 1784, John Mitchell, a Yorkshire clergyman, suggested that light was subject to the force of gravity long before Einstein proved it.

After the publication of the theory of General Relativity in 1916, in which Albert Einstein predicted the existence of black holes, in 1967 John Wheeler named them. Nigel Calder calls them “awesome engines of quasars and active galaxies.” We now have multiple variations of the original concept: charged black holes, rotating black holes, stationary black holes, supermassive black holes, stellar black holes, miniature black holes.

Let’s get to Wheeler’s three-part life- story, the last part he called “Everything is Information”.

In the final decades of his life, the question that intrigued Wheeler most was: “Are life and mind irrelevant to the structure of the universe, or are they central to it?” He suggested that the nature of reality was revealed by the bizarre laws of quantum mechanics. According to the quantum theory, before the observation is made, a subatomic particle exists in several states, called a superposition (or, as Wheeler called it, a 'smoky dragon'). Once the particle is observed, it instantaneously collapses into a single position.

Wheeler suggested that reality is created by observers and that: “no phenomenon is a real phenomenon until it is an observed phenomenon.” He coined the term “Participatory Anthropic Principle” (PAP) from the Greek “anthropos”, or human. He went further to suggest that “we are participants in bringing into being not only the near and here, but the far away and long ago.” [Reference: Radio Interview With Martin Redfern]

This claim was considered rather outlandish until his thought experiment, known as the “delayed-choice experiment,” was tested in a laboratory in 1984. This experiment was a variation on the famous “double-slit experiment” in which the dual nature of light was exposed (depending on how the experiment was measured and observed, the light behaved like a particle (a photon) or like a wave).

Unlike the original “double-slit experiment”, in Wheeler’s version, the method of detection was changed AFTER a photon had passed the double slit. The experiment showed that the path of the photon was not fixed until the physicists made their measurements. The results of this experiment, as well as another conducted in 2007, proved what Wheeler had always suspected – observers’ consciousness is required to bring the universe into existence. This means that a pre-life Earth would have existed in an undetermined state, and a pre-life universe could only exist retroactively.

A UNIVERSE 'FINE-TUNED' FOR LIFE:

These conclusions lead many scientists to speculate that the universe is fine-tuned for life. This is how Wheeler’s Princeton colleague, Robert Dicke, explained the existence of our universe:

“If you want an observer around, and if you want life, you need heavy elements. To make heavy elements out of hydrogen, you need thermonuclear combustion. To have thermonuclear combustion, you need a time of cooking in a star of several billion years. In order to stretch out several billion years in its time dimension, the universe, according to general relativity, must be several years across in its space dimensions. So why is the universe as big as it is? Because we are here!”

Stephen Hawking has also noted: “The laws of science, as we know them at present, seem to have been very finely adjusted to make possible the development of life.” Fred Hoyle, in his book Intelligent Universe, compares “the chance of obtaining even a single functioning protein by a chance combination of amino acids to a star system full of blind men solving Rubik’s Cube simultaneously.”

Physicist Andrei Linde of Stanford University adds: “The universe and the observer exist as a pair. I cannot imagine a consistent theory of the universe that ignores consciousness.” [Reference: "Biocentrism: How Life and Consciousness are the Keys to Understanding the Universe"]

Wheeler, always an optimist, believed that one day we would have a clear understanding of the origin of the universe. He had “a sense of faith that it can be done.” “Faith”, he wrote, “is the number one element. It isn’t something that spreads itself uniformly. Faith is concentrated in few people at particular times and places. If you can involve young people in an atmosphere of hope and faith, then I think they’ll figure out how to get the answer.”

Wheeler died of pneumonia on April 13, 2008, at age 96. His whole life he searched for answers to philosophical questions about the origin of matter, the nature of information and the universe. “We are no longer satisfied with insights into particles, or fields of force, or geometry, or even space and time,” he wrote in 1981, “Today we demand of physics some understanding of existence itself.”  [Reference: "The Voice of Genius: Conversations with Nobel Scientists and Other Luminaries"]

Let’s hope that young scientists will continue to be encouraged by these words and will push the boundaries of human imagination beyond its limits, and maybe even find the elusive final theory – a Theory of Everything.