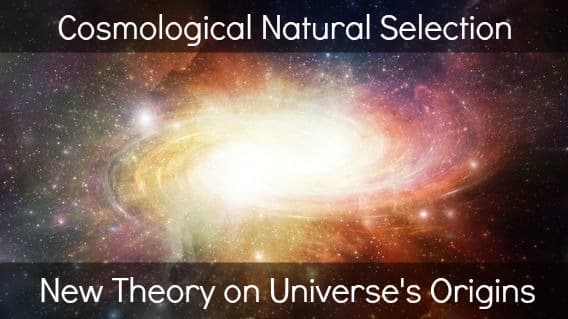 In my opinion, the theory of evolution by natural selection is one of the most elegant and by far one of the most encompassing theories humanity has ever come up with. Even though it was originally proposed in biology, the underlying idea has been applied to scientific fields across the board. From a cosmological perspective, scientists are attempting to use the same line of thinking. What if the laws of physics have been fine-tuned over the eons, via evolutionary processes, where universes create offspring through black holes? That idea might not be as insane as you think.

“Cosmological natural selection” (also known as ‘fecund universes theory) was first proposed by Lee Smolin, an eminent theoretical physicist and professor at the Perimeter Institute for Theoretical Physics more than two decades ago. He has continued to make revisions to his hypothesis, but the basic idea is simple: can we use evolutionary terms to describe the universe.

Such a hypothesis explains several aspects of our universe, such as why the fundamental constants of physics are so conducive to live. After all, universes containing large quantities of matter (which allows for the formation of the things we see) are more likely to spawn black holes – in other words, universes containing the ‘stuff of life’ have a better chance of ‘reproducing’ than those that don’t. Obviously, natural selection in this way would favor universes that were able to produce more offspring.

This theory is basically multiverse theory on crack (or, rather the landscape multiverse which is the traditionally proposed model for the multiverse). These universal offspring would form inside black holes and ‘genetic mutations’ would allow for different physical constants to accompany the new baby universe. Moreover, according to conventional physics, information can’t really travel across the event horizon of a black hole (See: The Black Hole War, My Battle with Stephen Hawking for more on that) – this basically creates a universe isolated and inaccessible to the parent universe.

The point of the cosmological natural selection hypothesis has been made, using darwinistic terms, you can describe the nature of the universe. The hypothesis is very far from having any real physical proof supporting it, problems more conventional physics have had no problems pointing out. From a scientific standpoint, Smolin’s hypothesis does made falsifiable predictions, mainly regarding inflation and the neutron stars, that have held up to scrutiny.