Uniting Gravity and Quantum Mechanics: The Physics of String Theory 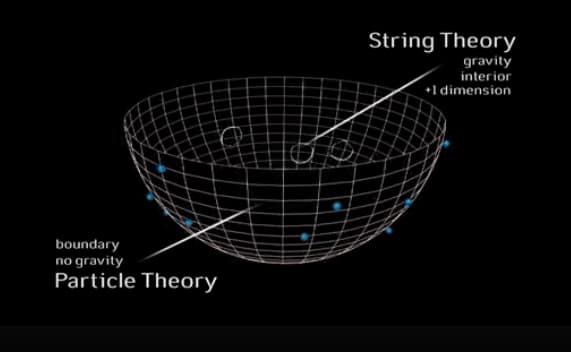 Imagine you are sitting in a big symphony hall, and you're listening to an orchestra play for the first time.  The orchestra is performing a Violin Concerto by Beethoven. As the soloist runs her hands and fingers along the neck of the violin, she produces different notes or pitches. Every note the violin produces has a different sound, pitch, and vibration.

With each note comes a different possible direction for the music being created. This concept can be applied to quantum physics as well—Meet string theory.

In order to understand String Theory, you need at least a basic understanding of how the world of the very, very small works.

As you may know, everything is made up of small particles. Matter is made from atoms, which are in turn made of three basic components: electrons, neutrons, and protons. The electron is fundamental, but neutrons and protons are made of even smaller particles, known as quarks. Quarks are, as far as we know, truly elementary.

What we know about the subatomic composition of the universe is known as the Standard Model of Particle Physics. It describes the fundamental building blocks out of which the world is made, and the forces through which these blocks interact. There are twelve basic building blocks. Six of these building blocks are quarks. They go by the names: up, down, charm, strange, bottom and top. (A proton, for instance, is made of two up quarks and one down quark.) The other six are leptons. These include the electron and its two heavier siblings, the muon and the tauon, as well as three neutrinos.

Within the universe there are four fundamental forces: gravity, electromagnetism, and the weak and strong nuclear forces. Each of these four forces is produced by particles that act as carriers of the force in question. The behavior of all of these particles and forces is described by the Standard Model, with one notable exception: Gravity.

In the past ten years, string theory has emerged as one of the most promising candidates for a quantum explanation for gravity. But there is more to string theory than just explaining gravity on a molecular level; string theory is, essentially, the theory of everything. It is the attempt to unite the physics of our universe.

The idea behind String Theory is that each fundamental particle in the Standard Model is made up of tiny strings. These strings manifest in different ways to produce the different particles that we observe. For example, if a string is excited and vibrates a certain way, it will produce a proton. If it vibrates another way, it will form a neutrino. Another way, a quark…so on and so on.

So, if String Theory is correct, the entire universe is made up of, well, strings.

To make this a bit easier to comprehend, very roughly speaking, String Theory replaces point particles with strings, which can be either open or closed (depending on the particular type of particle that is being replaced by the string). And since String Theory is a theory of quantum gravity, it means that the average size of a string should be somewhere near the length scale of quantum gravity. This is called the Planck length, and it is about is about 10-33 cm.  And the strings are one-dimensional.

The point being made here is that strings are absurdly small, far too small for us to see, and that they work on very tiny scales.

Now then, in string theory, Feynman diagrams are replaced by surfaces, and wordlines turn into world-sheets. This is because the strings oscillate in space and time, and as they oscillate, they obviously work in a two-dimensional surface as they sweep about in space and time. These are what we call the world-sheet (as opposed to the world line of a particle).

Ultimately, the very nature of strings unifies general relativity and quantum mechanics. The problem that we currently have is, under quantum field theory, particles interact over zero distance in spacetime, but in the general theory of relativity, the graviton cannot operate at zero distance.

So, how do strings solve this dilemma?

It all has to do with the aforementioned oscillations and tiny scales. Because they are one-dimensional and have length, they "smear" interactions over small distances. This process smooths out spacetime enough for the graviton to interact with other quantum field particles, and in so doing, it unifies the two sets of laws.

So, just as there are an endless number of possible pieces of music the orchestra could play, so our universe could be one of billions of other universes. They have a different history and background than the strings in our universe, meaning that some universes are unstable and collapse back to where they came from, a Big Crunch. Others, may not produce gravity, so they would never be able to produce, well, anything, and would be eternally dark and dead. Others will go on to produce stars, galaxies and planets, just like our universe.

Of course, we wouldn't be able to see these different vibrations (universes) because they would be outside of our own, but the implications are still interesting.

This is meant to serve as a basic introduction to String Theory. For more information in the math behind this, please see this pdf.