How to Talk to Your Family About Space Tourism 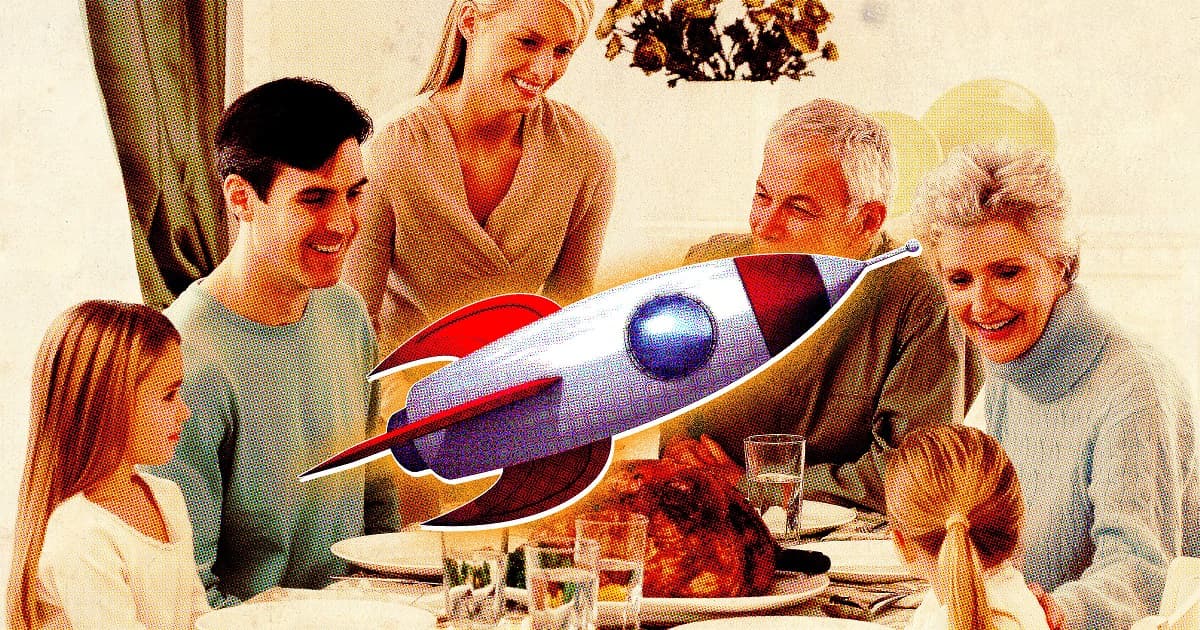 Billionaires are extremely keen on getting into space — and taking other billionaires' money in exchange for a seat. Here's how to talk to your family about it.

As of right now, a handful of companies are starting to sell tickets on board their spacecraft to "space," with the hopes of establishing an entirely new industry. But everything from the environmental impact to the definition of "space" is up for hot debate.

Both Blue Origin CEO Jeff Bezos and Virgin Galactic CEO Richard Branson launched to "space" on their respective companies' spacecraft this year, ogling the Earth's surface below and waxing poetic about having their perspectives on life changed after spending a handful of minutes floating around the cabin.

And the tickets aren't cheap. In fact, they are so not-cheap that companies are struggling to sell tickets. Did we mention they're aren't even going to actual space-space?

While Bezos made it past the Karman line, which is the internationally agreed upon — and essentially arbitrary — boundary of space at 62 miles, neither billionaire CEO made it far past the upper atmosphere, nevermind orbit around Earth.

One company, the Elon Musk-led SpaceX, is already going much farther. Its Inspiration4 crew spent three days orbiting the planet on board a SpaceX Crew Dragon spacecraft in September, on an orbital path almost 300 miles past where Bezos and Branson traveled.

All told, space tourism is the latest conclusion of private companies trying to take your money in exchange for spending next spring break in space. But is it really all it's cracked up to be? That's highly debatable.

Did we mention that rocketing into space is still an incredibly polluting process? While NASA, often with the help of SpaceX, is sending humans into space for the sake of furthering our scientific understanding of nature and space, Virgin Galactic and Blue Origin and SpaceX are all doing so to give rich people cloud — while exacting an environmental toll that we don't even fully understand.

Read This Next
Billionaire Space Club
Man Getting Paid to Fly Rich Guys to Space Says Don't Worry, They're Not Just Idle Tourists
Billionaire Blast Off
Billionaire Says He's Buying SpaceX Launches for "Private Space Program"
Lucky Bastard
Billionaire Space Tourist Basically Says "Let Them Eat Cake"
Maiden Voyage
Check Out How Stoked This Billionaire Is to Leave Our Dying Planet
Oh Snap
Tom Hanks Says He Turned Down Jeff Bezos' Offer to Go to Space
More on Off World
Heavy Metal
6:27 PM on the byte
NASA Mars Rover Finds Metallic Object That Smashed Down on Surface
Small But Mighty
5:44 PM on the byte
Baby Asteroid Photobombs James Webb On Accident
Little Guy
3:28 PM on the byte
Scientists Prototype "Creeping" Lizard-Like Robot for Exploring Mars
READ MORE STORIES ABOUT / Off World
Keep up.
Subscribe to our daily newsletter to keep in touch with the subjects shaping our future.
+Social+Newsletter
TopicsAbout UsContact Us
Copyright ©, Camden Media Inc All Rights Reserved. See our User Agreement, Privacy Policy and Data Use Policy. The material on this site may not be reproduced, distributed, transmitted, cached or otherwise used, except with prior written permission of Futurism. Articles may contain affiliate links which enable us to share in the revenue of any purchases made.
Fonts by Typekit and Monotype.