How Can Space Travel Faster Than The Speed Of Light? 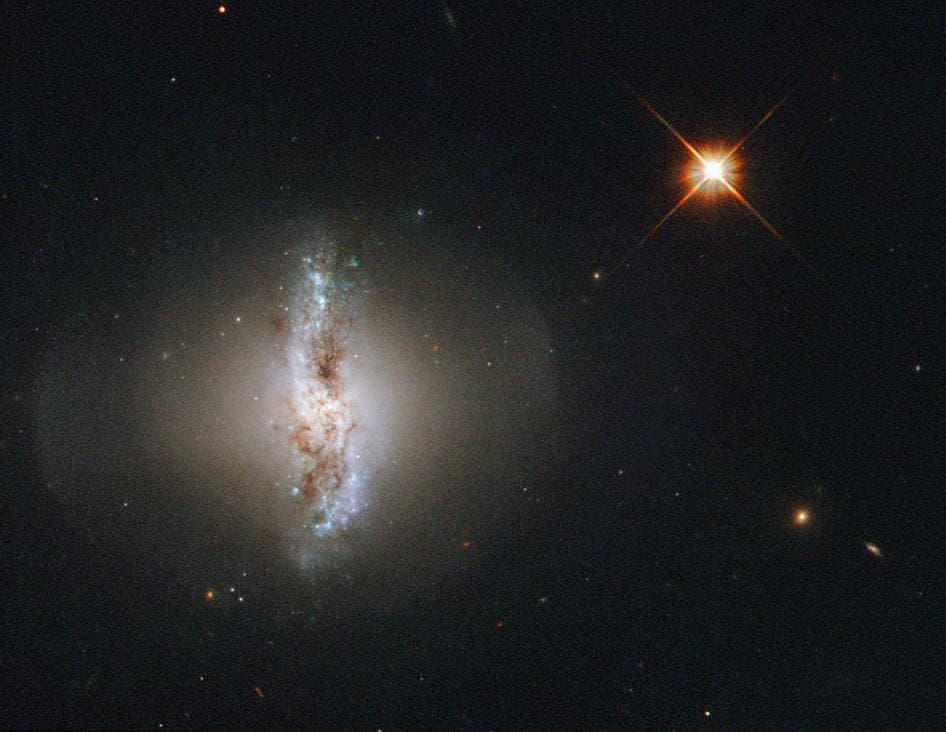 Cosmologists are intellectual time travelers. Looking back over billions of years, these scientists are able to trace the evolution of our Universe in astonishing detail. 13.8 billion years ago, the Big Bang occurred. Fractions of a second later, the fledgling Universe expanded exponentially during an incredibly brief period of time called inflation. Over the ensuing eons, our cosmos has grown to such an enormous size that we can no longer see the other side of it.

But how can this be? If light’s velocity marks a cosmic speed limit, how can there possibly be regions of spacetime whose photons are forever out of our reach? And even if there are, how do we know that they exist at all?

Like everything else in physics, our Universe strives to exist in the lowest possible energy state possible. But around 10-36 seconds after the Big Bang, inflationary cosmologists believe that the cosmos found itself resting instead at a “false vacuum energy” – a low-point that wasn’t really a low-point. Seeking the true nadir of vacuum energy, over a minute fraction of a moment, the Universe is thought to have ballooned by a factor of 1050.

Since that time, our Universe has continued to expand, but at a much slower pace. We see evidence of this expansion in the light from distant objects. As photons emitted by a star or galaxy propagate across the Universe, the stretching of space causes them to lose energy. Once the photons reach us, their wavelengths have been redshifted in accordance with the distance they have traveled.

This is why cosmologists speak of redshift as a function of distance in both space and time. The light from these distant objects has been traveling for so long that, when we finally see it, we are seeing the objects as they were billions of years ago.

Redshifted light allows us to see objects like galaxies as they existed in the distant past; but we cannot see all events that occurred in our Universe during its history. Because our cosmos is expanding, the light from some objects is simply too far away for us ever to see.

The physics of that boundary rely, in part, on a chunk of surrounding spacetime called the Hubble volume. Here on Earth, we define the Hubble volume by measuring something called the Hubble parameter (H0), a value that relates the apparent recession speed of distant objects to their redshift. It was first calculated in 1929, when Edwin Hubble discovered that faraway galaxies appeared to be moving away from us at a rate that was proportional to the redshift of their light.

Yes, “faster than the speed of light.” How is this possible?

The Magic of Relativity

The answer has to do with the difference between special relativity and general relativity. Special relativity requires what is called an “inertial reference frame” – more simply, a backdrop. According to this theory, the speed of light is the same when compared in all inertial reference frames. Whether an observer is sitting still on a park bench on planet Earth or zooming past Neptune in a futuristic high-velocity rocket ship, the speed of light is always the same. A photon always travels away from the observer at 300,000,000 meters per second, and he or she will never catch up.

General relativity, however, describes the fabric of spacetime itself. In this theory, there is no inertial reference frame. Spacetime is not expanding with respect to anything outside of itself, so the the speed of light as a limit on its velocity doesn’t apply. Yes, galaxies outside of our Hubble sphere are receding from us faster than the speed of light. But the galaxies themselves aren’t breaking any cosmic speed limits. To an observer within one of those galaxies, nothing violates special relativity at all. It is the space in between us and those galaxies that is rapidly proliferating and stretching exponentially.

Now for the next bombshell: The Hubble volume is not the same thing as the observable Universe.

To understand this, consider that as the Universe gets older, distant light has more time to reach our detectors here on Earth. We can see objects that have accelerated beyond our current Hubble volume because the light we see today was emitted when they were within it.

Strictly speaking, our observable Universe coincides with something called the particle horizon. The particle horizon marks the distance to the farthest light that we can possibly see at this moment in time – photons that have had enough time to either remain within, or catch up to, our gently expanding Hubble sphere.

(A quick note: the particle horizon is not the same thing as the cosmological event horizon. The particle horizon encompasses all the events in the past that we can currently see. The cosmological event horizon, on the other hand, defines a distance within which a future observer will be able to see the then-ancient light our little corner of spacetime is emitting today.

Thanks to the expansion of the Universe, there are regions of the cosmos that we will never see, even if we could wait an infinite amount of time for their light to reach us. But what about those areas just beyond the reaches of our present-day Hubble volume? If that sphere is also expanding, will we ever be able to see those boundary objects?

This depends on which region is expanding faster – the Hubble volume or the parts of the Universe just outside of it. And the answer to that question depends on two things: 1) whether H0 is increasing or decreasing, and 2) whether the Universe is accelerating or decelerating. These two rates are intimately related, but they are not the same.

In fact, cosmologists believe that we are actually living at a time when H0 is decreasing; but because of dark energy, the velocity of the Universe’s expansion is increasing.

That may sound counter-intuitive, but as long as H0 decreases at a slower rate than that at which the Universe’s expansion velocity is increasing, the overall movement of galaxies away from us still occurs at an accelerated pace. And at this moment in time, cosmologists believe that the Universe’s expansion will outpace the more modest growth of the Hubble volume.

So even though our Hubble volume is expanding, the influence of dark energy appears to provide a hard limit to the ever-increasing observable Universe.

Cosmologists seem to have a good handle on deep questions like what our observable Universe will someday look like and how the expansion of the cosmos will change. But ultimately, scientists can only theorize the answers to questions about the future based on their present-day understanding of the Universe. Cosmological timescales are so unimaginably long that it is impossible to say much of anything concrete about how the Universe will behave in the future. Today’s models fit the current data remarkably well, but the truth is that none of us will live long enough to see whether the predictions truly match all of the outcomes.

Disappointing? Sure. But totally worth the effort to help our puny brains consider such mind-bloggling science – a reality that, as usual, is just plain stranger than fiction.

By Vanessa Janek at Universe Today

Read This Next
Hall Effect
Test Suggests Ion Thrusters Could Power Crewed Interplanetary Missions
Shoo
Scientists Warn Giant Asteroid Is Actually Swarm, Nearly Impossible to Destroy
What Does It All Mean?
The Second Alien Probe We Detect May Be Particularly Bizarre, Scientist Says
A Sip of Opal
NASA Discovers Precious Gemstones on Mars
And He Scores
We Are Completely Puzzled by This Video of a Chinese Astronaut Playing Ping-Pong in Space
More on Off World
Trashing Orbit
Yesterday on the byte
Elon Musk Says SpaceX May Build Starship That Dies on Purpose
Cat and Mouse
Yesterday on the byte
SpaceX to Launch "Hunter" Satellites for Targeting Rival Spacecraft
Space In Space
Yesterday on the byte
NASA Official Admits There's a Bit of an Issue on the Space Station
READ MORE STORIES ABOUT / Off World
Keep up.
Subscribe to our daily newsletter to keep in touch with the subjects shaping our future.
+Social+Newsletter
TopicsAbout UsContact Us
Copyright ©, Camden Media Inc All Rights Reserved. See our User Agreement, Privacy Policy and Data Use Policy. The material on this site may not be reproduced, distributed, transmitted, cached or otherwise used, except with prior written permission of Futurism. Articles may contain affiliate links which enable us to share in the revenue of any purchases made.
Fonts by Typekit and Monotype.