More Than 30 Billion Light-Years Away, Hubble Captures the Most Distant Galaxy Ever Found

You are seeing this galaxy as it existed 13.4 billion years in the past. 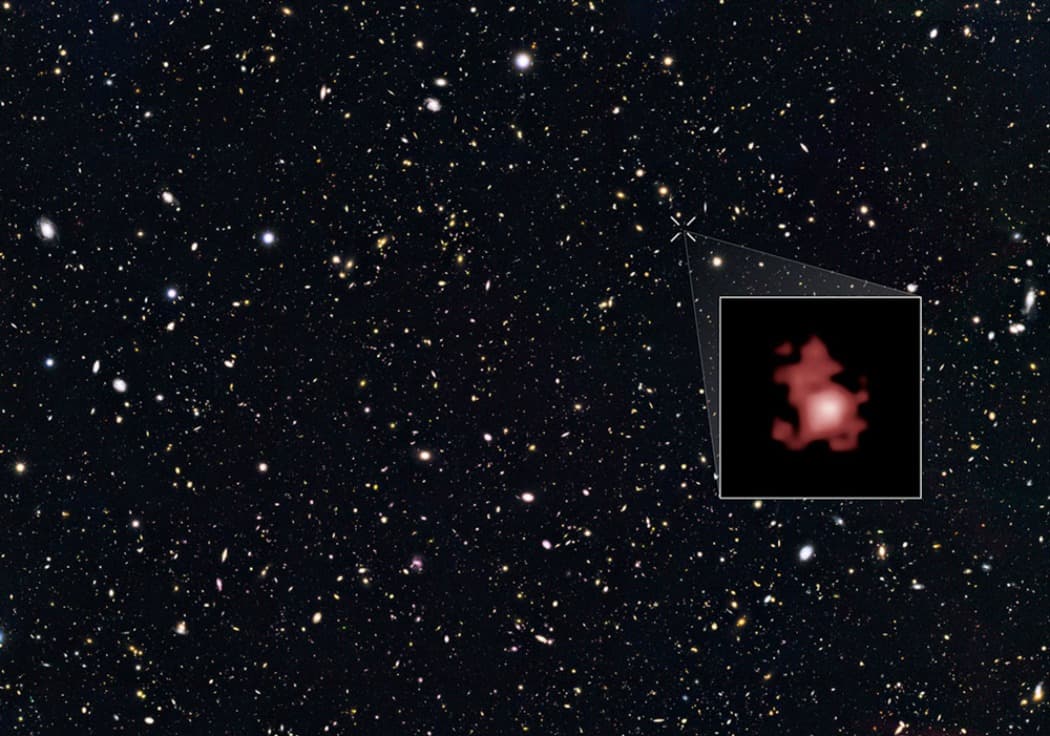 While much has been said about the planned successors to NASA's Hubble Space Telescope (WFIRST and the James Webb), Hubble has shown that it can still perform admirably. In fact, a recent announcement has just added another notch to the list of Hubble's achievements.

An international team of astronomers has used the space telescope to shatter the cosmic distance record by measuring the farthest galaxy ever seen in the universe. This bright, infant galaxy, named GN-z11, is seen as it was 13.4 billion years in the past (just 400 million years after the Big Bang).

"We've taken a major step back in time, beyond what we'd ever expected to be able to do with Hubble. We see GN-z11 at a time when the universe was only three percent of its current age," explained principal investigator Pascal Oesch.

Astronomers are trying to focus on the first galaxies that formed in the universe and, with this discovery, they are closing in on them. The observations brought astronomers to a realm of galaxies that was previously thought to be reachable only with NASA's upcoming James Webb Space Telescope.

LOOKING BACK IN TIME

Scientists measure astronomical distances by determining the "redshift" of a galaxy, which is a result of the expansion of the universe. To break this down a bit, redshift is a result of light being stretched to longer (and consequently redder) wavelengths as space expands as the light travels to our telescope. By measuring this redshift, we are able to obtain a precise measure of where the light traveled from.

The previous galaxy that was a record holder had a redshift of 8.68, which means we see it as it was some 13.2 billion years in the past. GN-z11, in comparison, has a redshift of 11.1, which puts it at the aforementioned 13.4 billion years and 200 million years closer to the Big Bang. The researchers estimate that the record could only be surpassed with the help of the James Webb Space Telescope.

Notably, scientists at Texas A&M University and the University of Texas at Austin previously found galaxy z8_GND_5296, which is a staggering 30 billion light-years away. Thanks to the expansions of the universe, GN-z11 is (at the present time) even more distant than this.

Even though it is far away, we still know a lot about it (relatively speaking).

The imaging of GN-z11 reveals it is 25 times smaller than our galaxy and has one percent of our galaxy's mass in stars. It is growing fast, forming stars at a rate 20 times greater than our galaxy. This is part of the reason why the galaxy is unexpectedly bright when imaged.

The results also provide new clues about the nature of the very early universe, but while these results are exciting, it is but a tantalizing preview of the observations that the James Webb Space Telescope could offer after it is launched into space in 2018.

Read This Next
Hubble Surprise
Hubble Takes Another Incredible Picture After Gyroscope Failure
Futurism
Get Ready to See the Largest Picture of the Universe Ever Taken
Futurism
These Are Real Images of a Star Going Supernova
Futurism
Scientists Just Found the First Evidence That the Trappist-1 System Might Contain Water
Futurism
A "Superpower" of Nature Made This Stunning Image of a Far-Off Galaxy Possible
More on Off World
Killernova
Yesterday on the byte
Scientists Find "One in Ten Billion" Star System Primed to Explode in Titanic Kilonova
Lonely Planet
Feb 5 on futurism
Scientists Find Nearby Planet the Same Size of Earth, Plan to Search It for Life
Take Cover
Feb 4 on the byte
Space Startup Blows Up Another Giant Inflatable Space Station Module
READ MORE STORIES ABOUT / Off World
Keep up.
Subscribe to our daily newsletter to keep in touch with the subjects shaping our future.
+Social+Newsletter
TopicsAbout UsContact Us
Copyright ©, Camden Media Inc All Rights Reserved. See our User Agreement, Privacy Policy and Data Use Policy. The material on this site may not be reproduced, distributed, transmitted, cached or otherwise used, except with prior written permission of Futurism. Articles may contain affiliate links which enable us to share in the revenue of any purchases made.
Fonts by Typekit and Monotype.