Harvard Astronomers Propose That Our Star System Used to Be Binary

"The Sun's long-lost companion could now be anywhere in the Milky Way." 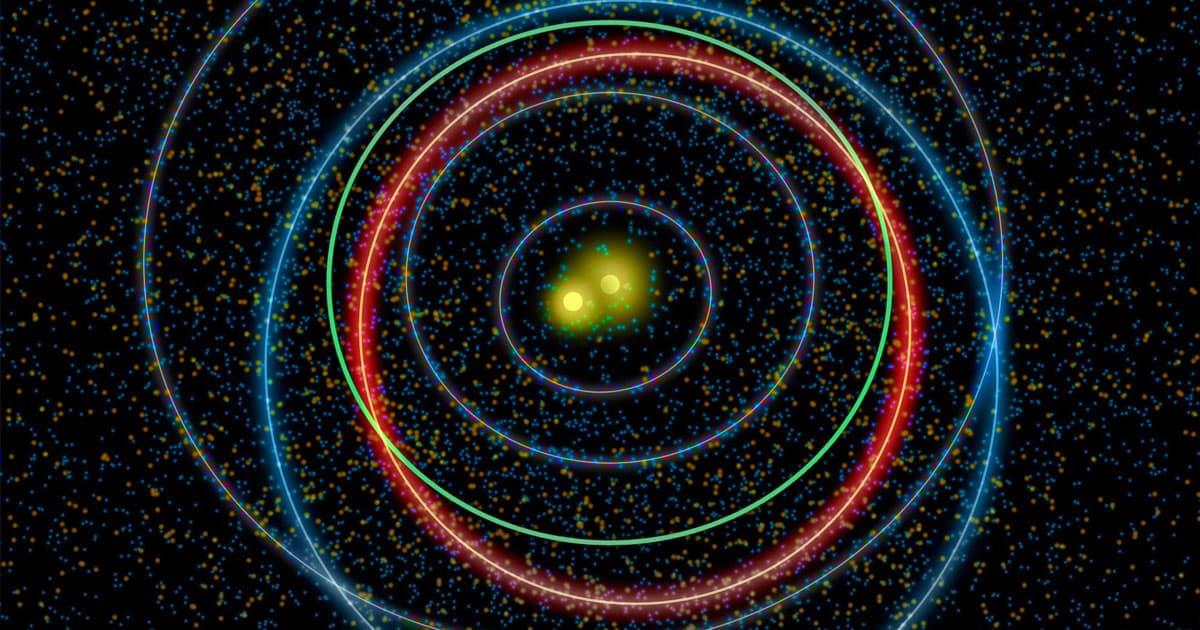 A team of Harvard astronomers have a wild new theory: the Sun used to have a companion star, making our solar system a binary one during its ancient history.

The astronomers say the theory could explain the formation of the Oort cloud, a theoretical cloud of dust and smaller objects in the distant regions of our solar system that many believe was created out of the left overs from the early solar system.

In a new preprint submitted last month to the preprint archive arXiv, the team suggests that the Sun used to have a long lost binary star companion. Such a system could explain how some objects were scattered to the far reaches of the solar system, sometimes even making it to neighboring systems and vice versa.

"Previous models have had difficulty producing the expected ratio between scattered disk objects and outer Oort cloud objects," Amir Siraj, a Harvard undergraduate student involved in the research, said in a statement. "The binary capture model offers significant improvement and refinement, which is seemingly obvious in retrospect: most Sun-like stars are born with binary companions."

A binary star system would be far more likely to capture the Oort cloud.

"Binary systems are far more efficient at capturing objects than are single stars," co-author Avi Loeb said in the statement. "If the Oort cloud formed as observed, it would imply that the Sun did in fact have a companion of similar mass that was lost before the Sun left its birth cluster."

The theory could also have sweeping implications of how life came to be on Earth.

"Objects in the outer Oort Cloud may have played important roles in Earth's history, such as possibly delivering water to Earth and causing the extinction of the dinosaurs," said Siraj.

The implications don't end there. Some astronomers believe our solar system is hiding a ninth major planet from us, dubbed Planet Nine. This potential planet so far has been hypothesized to be anything from a massive super-Earth planet to a collection of over 100 "minor planets" found well beyond the orbit of Neptune — or even a tiny black hole.

The astronomers want to use the upcoming Vera C Rubin Observatory (VRO), slated to begin operations early next year, to confirm the existence of Planet Nine — and other potential "trans-Neptunian objects" like it.

"It is unclear where they came from, and our new model predicts that there should be more objects with a similar orbital orientation to Planet Nine," Loeb said.

"If the VRO verifies the existence of Planet Nine, and a captured origin, and also finds a population of similarly captured dwarf planets, then the binary model will be favored over the lone stellar history that has been long-assumed," Siraj argued.

The team suggests that the Sun's long lost binary companion would have been removed by other stars, born alongside our Sun in the same cluster, through their gravitational influence.

"The Sun's long-lost companion could now be anywhere in the Milky Way," Siraj said.

READ MORE: The sun may have started its life with a binary companion [Harvard-Smithsonian Center for Astrophysics]

More on Planet Nine: Astronomers Want to Figure Out What the Hell Planet Nine Is

Read This Next
Planet XP
Scientists May Have Accidentally Spotted an Extra Planet in Our Solar System
Yeet!
This Star Appears to Have Survived a Supernova
Planet Nein
Astronomers Want to Figure Out What the Hell Planet Nine Is Once and For All
Pluto Not So Special Anymore
Scientists Discover 139 New "Minor Planets" in Our Solar System
Futurism
It's 2018. Here Are Six Scientific Mysteries We Still Haven't Solved.
More on Hard Science
Tractor Beam
2:13 PM on the byte
Scientists Build Working Tractor Beam, Although It's Comically Tiny
Having a Blast
Jan 18 on the byte
New Study Shows Where You Should Hide to Survive a Nuclear Attack
Offworld Amino
Jan 15 on the byte
Scientists Find Building Blocks of Life in Meteor That Smashed Into Family's Driveway
READ MORE STORIES ABOUT / Hard Science
Keep up.
Subscribe to our daily newsletter to keep in touch with the subjects shaping our future.
+Social+Newsletter
TopicsAbout UsContact Us
Copyright ©, Camden Media Inc All Rights Reserved. See our User Agreement, Privacy Policy and Data Use Policy. The material on this site may not be reproduced, distributed, transmitted, cached or otherwise used, except with prior written permission of Futurism. Articles may contain affiliate links which enable us to share in the revenue of any purchases made.
Fonts by Typekit and Monotype.