And it could be coming to your city. 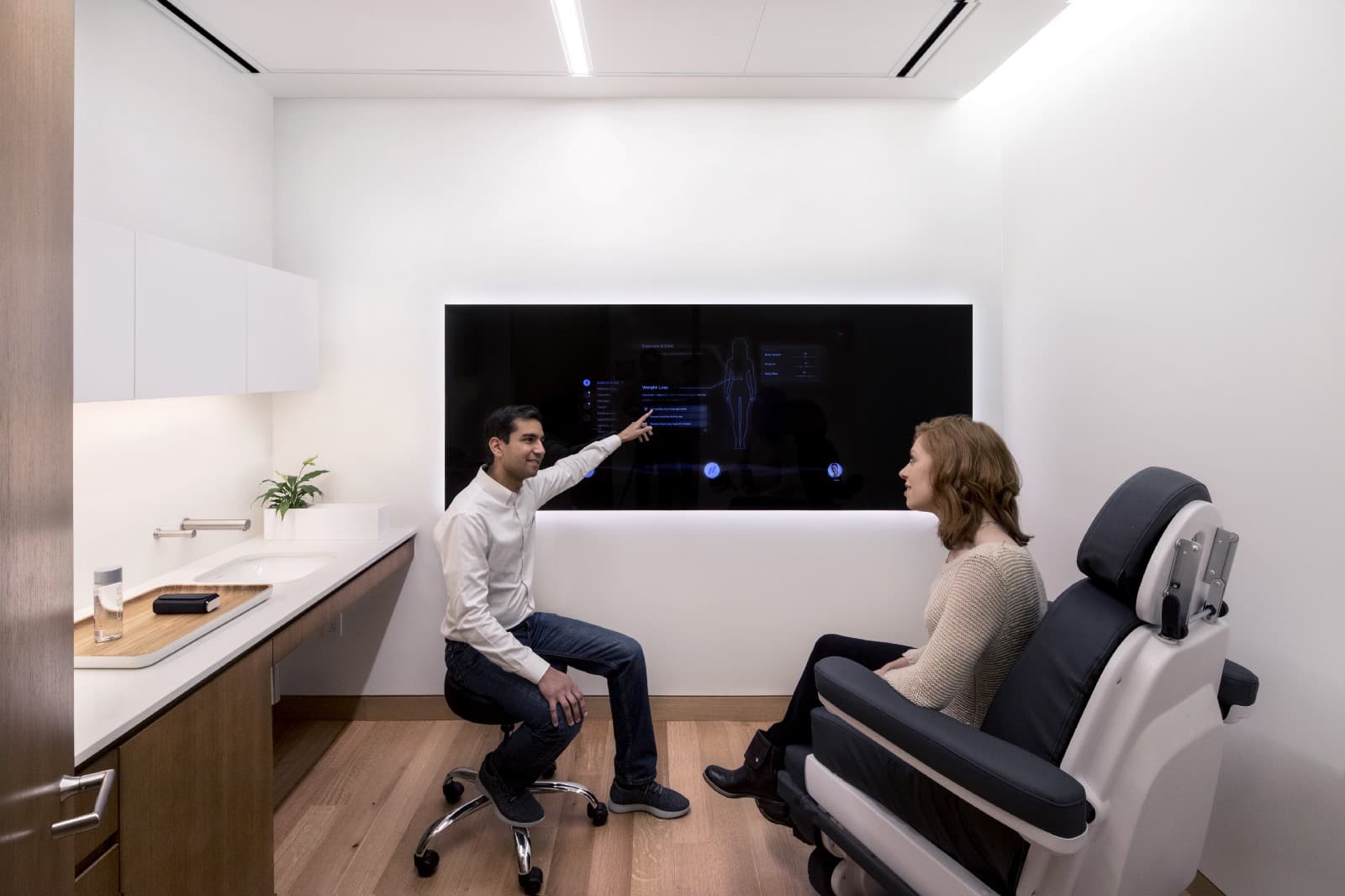 Forward, a futuristic take on the popular concierge medical practice model, has raised $100 million and is expanding nationwide, BuzzFeed News has learned.

Launched in January, Forward is the product of several dozen veterans of Google, Facebook, Uber, and Palantir getting together to reinvent the doctor's office. Its flagship location in San Francisco looks like an Apple Store meets "Westworld," complete with state-of-the-art diagnostics tools and an AI system that listens and takes notes for physicians.

The company is expanding outside its hometown with locations in other cities and a mobile doctor's office, built on an 18-foot-long trailer bed. The truck will roll through San Francisco until early September, when it leaves for other cities.

I toured Forward's location in San Francisco earlier this year. Here's what it was like.

This is how Silicon Valley does the doctor's office.

In 2015, Aoun was riding his bike to Google's offices in Menlo Park — where he worked on artificial intelligence and ran the special projects division at Alphabet — when he got a call.

"Don't freak out, but I'm having a heart attack," his thirty-something relative said over the sounds of sirens blaring. "I'm in an ambulance on my way to the hospital. So what do I do?"

After months of doctor appointments, phone calls with billing offices and insurance companies, and countless hours spent on Google trying to figure out what all the jargon meant, Aoun became frustrated by how difficult the healthcare system was to navigate.

"Doctors are kind of awesome. They're incredibly smart. They're crazy well-educated. They mean well," Aoun told Business Insider. "But the problem is, they're totally set up for failure."

"It's kind of not their fault as much as, I would actually argue, it's my fault," he said. "[If I'm] representing the engineering community, we totally dropped the ball."

His relative's near-death experience was an eye-opener, Aoun told Business Insider. He set out to make the healthcare system more predictable, consistent, and convenient.

He assembled a team of some of the most brilliant minds in Silicon Valley, including one of his cofounders, Ilya Abyzov, an early Uber employee who helped launch UberX.

Founded in 2016, Forward makes over every touch point in healthcare. The company's engineers built things like diagnostics tools and a mobile app that patients use to book appointments. The technology creates a better user experience for members and their doctors, according to Aaliya Yaqub, a Forward physician and Facebook Health Center alumna.

Forward's vision has made an impression on venture capitalists. Its investors include Khosla Ventures, Peter Thiel's Founders Fund, Eric Schmidt, and Marc Benioff.

Forward's flagship location, which opened January 17, mimics the look and feel of an Apple Store. When members arrive, they sign in on an iPad at the reception desk.

After signing in, members can make their way to the body scanner, a diagnostics tool built in-house that could easily be a prop from the sophisticated lab facilities in "Westworld."

After patients hop on and slide two fingers into the scanner, the screen lights up with their biometric data, including height, weight, and body temperature. Sensors project an invisible thermal map on top of the patient and send light through them, measuring their heart rate and how much oxygen is in their blood.

In 45 seconds, the data sends to Forward's backend system. Patients can view their results from an app on their phone, while their doctors can access them from the exam room.

Tools like blood pressure cuffs and fingertip pulse oximeters have existed for a long time. But the company's all-in-one scanner helps make visits to the doctor a few minutes faster.

The exam room is where the real magic happens. The first thing members see when they walk in is a massive touch-screen display on the wall.

The algorithms that power it listen to the conversation happening in the room and cull relevant information for the physician's notes, which appear on the screen in real time. This way, the doctor can focus on the human sitting in front of them, rather than a laptop.

It also shows the member's history and sensor data, and it makes suggested diagnoses and treatment plans based on what it knows about the person. For example, if the doctor and patient decide to make weight loss an ongoing wellness goal, the display might recommend new exercise and dieting habits to help the member reach that goal.

The technology performed well during a demo I saw at the office, though it's unclear how reliable it is in a real-life setting.

Aoun also wanted to create a solution for one of the most embarrassing parts of a doctor visit: carrying a urine sample back to the nurses' station. At Forward, a member can place their sample in a hole in the wall that closes and delivers the cup where it needs to go.

A wood display case at the entrance shows off wearable sensors, vitamins, supplements, and skincare products that members can buy at discounted rates. These products are not sold on-site, however.

Though patients traveling outside the country might walk out with a free tote bag containing essentials like antibacterial soap and a reusable water bottle.

Patients can view their lab results anytime from the mobile app or message their doctor with follow-up questions.

Tech-savvy medical practices increasingly offer online access to lab results, but Forward might be the only practice to promise that members will receive a response within one minute of sending a message, day or night.

Membership starts at $149 a month, and members are still encouraged to buy insurance. Aoun expects the price to drop with time, drawing a comparison with the price tags on first-generation iPhones and Teslas and their costs today.

Still, $149 a month (roughly the cost of an annual One Medical Group membership) is a steep price to pay. It's worth it if the member starts making smarter lifestyle choices, Aoun said.

Read This Next
Brands We Love
This App Uses Karaoke to Get You Speaking New Languages
Brands We Love
Learn The Coding Skills You'll Need to Land Your Next Job With These Online Classes
Brands We Love
Sustainable Urban Living Isn’t Just Necessary – It’s a Giant Opportunity
Scream and Shout
"Aggression Detectors" Monitoring Students Don't Really Work
Algorithmic Artistry
These DJs Are Making Music By Coding on a Huge Screen
More on Future Society
I Silence Thee
Yesterday on futurism
Leaked Messages Seem to Show Elon Musk Using Twitter to Punish His Enemies
Gas Giant
Friday on the byte
Journalist Eats Lab-Grown Chicken, Gets "Weirdly Gassy"
Musk Rats
Thursday on the byte
Twitter Is Quietly Re-Suspending the Lunatics Elon Musk Let Back On
READ MORE STORIES ABOUT / Future Society
Keep up.
Subscribe to our daily newsletter to keep in touch with the subjects shaping our future.
+Social+Newsletter
TopicsAbout UsContact Us
Copyright ©, Camden Media Inc All Rights Reserved. See our User Agreement, Privacy Policy and Data Use Policy. The material on this site may not be reproduced, distributed, transmitted, cached or otherwise used, except with prior written permission of Futurism. Articles may contain affiliate links which enable us to share in the revenue of any purchases made.
Fonts by Typekit and Monotype.