Could We Gene Hack Ourselves to Be Blissed Out Sex Maniacs, Like Our Distant Cousins the Bonobos? 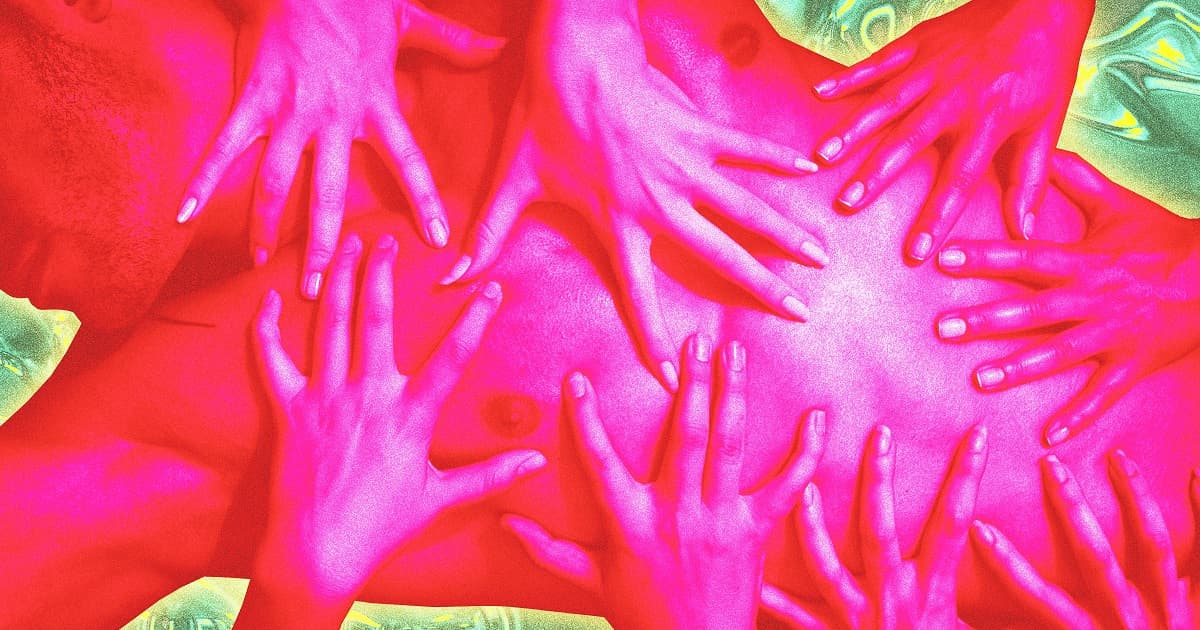 This week, we’re pleased to bring you a different version of Futurism, containing stories from the horizon of hedonism. Welcome to The Science of Pleasure. In collaboration with our friends over at MEL Magazine, this week, we’ll be bringing you stories from both publications about the pleasures of tomorrow, today.

Bonobos are a species of primate believed to be humankind’s second-closest living ancestor. That’s intriguing, because zoologists have long observed that these distant cousins of ours are driven by a syrupy mixture of empathy and hedonism, lounging in simian cuddle puddles, caressing one another, kissing with tongue, and engaging in an awe-inspiring variety of bisexual encounters, sometimes with multiple partners, and often while “screaming in pleasure.”

Sounds pretty fun, doesn’t it? Sure, party drugs like MDMA can temporarily flood your brain with oceans of empathy and euphoria, but they can be terrible for you if you take them too much, and the hangovers can be brutal. In other words, there’s no drug that’s gonna give you bonobo-brain safely and long term.

Relentless progress in the science of genetic engineering raises an interesting alternative, though: what if scientists gene-hacked humans, who already share around 98 percent of their genetic material with bonobos, so that we'd be more affectionate, amorous and generally happy? What if you could take a CRISPR-like brain injection that permanently altered your cognition so that you could experience bonobo-like bliss?

If such a thing is theoretically possible, geneticists told us, it’s far beyond today’s biotech capabilities. But eventually, if research continues to barrel ahead, those types of profound alterations to the human mind may well become a reality — and if so, they’re likely to raise profound questions about what it means to be human.

“I like to think that everything is in the realm of scientific possibility,” said Esmerelda Casas-Silva, a biomedical researcher at the National Institutes of Health who cautioned that her musings on our strange question did not reflect the views of her employer. “It's really just a matter of us figuring out how to do it.”

Overall, she said, she believes that the idea would be “tricky” yet “certainly possible.”

If so, what a life it would be. A greater genetic propensity for peace and promiscuity, like that of the bonobos, doesn’t sound so bad.

Famed scientist Carl Sagan and his spouse, “Cosmos” cocreator Ann Duyan, wrote extensively about bonobos in the 1993 book “Shadows of Forgotten Ancestors: A Search for Who We Are.”

Were we humans to become more like bonobos, militarism and excess aggression could become obsolete, as less authoritarian social structures characteristic of bonobo societies came to predominate. Socioeconomically, a bonobo way of life could embody the ethic of solidarity and cooperative decision-making over competition, domination or exploitation.

“The kind of pleasures that bonobos enjoy are not decadent,” said Susan Block, a sex therapist and the author of the 2014 book “The Bonobo Way: The Evolution of Peace Through Pleasure.” “They don't spend any money. Maybe a few bananas, but they share those bananas.”

Whether gene hacking ourselves to be as guileless and empathic as bonobos would be ethical, of course, is a different question entirely.

For one thing, the whole hypothetical smacks of eugenics. For another, even though the goal of gene therapy to make humans more like bonobos might nominally be to encourage a more equitable society, the ironic reality is that our actual world is rife with inequality, hierarchies, and unfair institutional arrangements.

In other words, it’d probably be the wealthy and powerful who would seize the treatment for themselves — or, chillingly, foist it on others in order to create a more obedient workforce, sort of similar to how in the 2018 satire film “Sorry to Bother You,” a parody of contemporary entrepreneurs named Steve Lift tries to use gene-modifying powder to create “Equisapien” human-horse hybrids capable of laboring harder and longer than people already do today.

“We really shouldn't be in a hurry to make designer babies right now,” Casas-Silva said. “We have very incomplete information, and even if we do know exactly what's going to happen, who's to say what we should decide and what characteristics are... best or not?”

That point is larger than just the bonobo thought experiment, of course, and it’s also something the world is likely going to need to confront soon. A Chinese scientist named He Jiankui sparked a global controversy in 2018 when he announced that he had altered the genetic makeup of twin girls, using CRISPR to attempt to make them immune to HIV while they were still embryos — and it later emerged that he had been involved in discussions to open a “designer baby” clinic as well.

If those types of clinics become a reality, it’ll likely only be affluent parents who can afford them, deepening existing social and economic divides.

“Are we going to create even more disparities in health and different populations that are suffering because they don't have access to the same technologies as, you know, other people who might have enough funds to make superhuman babies?” Casas-Silva asked. “And we could make very dangerous, in my opinion, very dangerous future humans.”

And, on a practical level, our anxious human brains keep the power plants running and the industrial agriculture machinery feeding everybody. If we spent all day lounging around and engaging in bacchanalia, that could easily fall apart, for better or worse.

In fact, Block points out that bonobos are a good case study in why giving yourself over to pleasure entirely might not be a great survival strategy.

Block told Futurism about an incident involving bonobos and common chimpanzees — our closest living ancestors, for those keeping score — in a German zoo during the bombing of Dresden. The zoo wasn’t bombed, but the apes could hear the detonations and possibly felt some of the impact.

“All the bonobos died of heart attacks, and all the common chimps didn't care,” the sexologist said, adding that the zoo kept the former separated in captivity, meaning they weren’t together to calm each other down.

“When you're empathetic, that's a double edged sword, isn't it?” she said. Empathy can “feel so good,” but it “also means that when you hear bombs dropping, even if they're not dropping on you, you freak out. It's like it's happening to you. Or if you see someone being hurt, you freak out.”

If we do go wild with CRISPR, or whatever advanced tool it takes, to turn human beings into overly peaceable and amorous creatures, Casas-Silva cautions that we could end up falling in love incessantly, with everyone or everything. It might even preclude the intense and exclusionary monogamous love that’s often the social norm.

“I mean, that could be pretty devastating,” Casas-Silva said. “There's a reason that our bodies and our minds decrease our feelings and our memories. That's a safety measure for anyone who's fallen in love and had it not work out. You know, it's a blessing that we can diminish those feelings of hurt and anxiety and everything that comes with a breakup over time.”

But, even if we refrain from hacking away at our genes in the hopes of bonoboizing ourselves, Block maintains we still have a lot to learn from our sex positive comrades, including lessons in revaluing our natural bodies and pursuing mutual pleasure without guilt.

“The idea that our natural self is Satan is killing us,” she said. “[The belief] that we are somehow superior, that we are angels, that we are not part of nature, that we are not part of this earth, that we can fly away, like angels — maybe a couple people can, you know? Captain Kirk went up there, right? Ninety years old, okay. But most of us are here, and I'm looking to improve the lives of those of us that are here on this beautiful, wild sexual planet Earth.”

More on CRISPR: WHO Says Gene-Hacking Superhumans Should Be Illegal

Read This Next
THEME WEEK!
This Is the Science of Pleasure
O-Face
Expert: In the Future, Spine Implants May Cause Orgasms on Demand
Sounds Controversial
Five Couples Agree to CRISPR Their Babies to Avoid Deafness
Pointless Procedure
CRISPR Baby Experiment Meant to Prevent HIV Might Not Even Work
Gene Editing Ban
Experts Call for Temporary World Ban on Gene-Hacked Children
More on Enhanced Humans
Brain Transparency
Feb 3 on futurism
Duke Professor Welcomes the "Promising" Future of Employers Reading Your Brain
Brain-Computer Im...
Jan 3 on the byte
Neuralink Cofounder Says New Company's Eye Implant Could Be "Ultimate" VR Tech
Eyes Have It
12. 30. 22 on futurism
Meet the Neuralink Cofounder Who Left and Started a Competitor That's Now Rapidly Catching Up
READ MORE STORIES ABOUT / Enhanced Humans
Keep up.
Subscribe to our daily newsletter to keep in touch with the subjects shaping our future.
+Social+Newsletter
TopicsAbout UsContact Us
Copyright ©, Camden Media Inc All Rights Reserved. See our User Agreement, Privacy Policy and Data Use Policy. The material on this site may not be reproduced, distributed, transmitted, cached or otherwise used, except with prior written permission of Futurism. Articles may contain affiliate links which enable us to share in the revenue of any purchases made.
Fonts by Typekit and Monotype.