These stars shone brightly some 13 billion years ago. 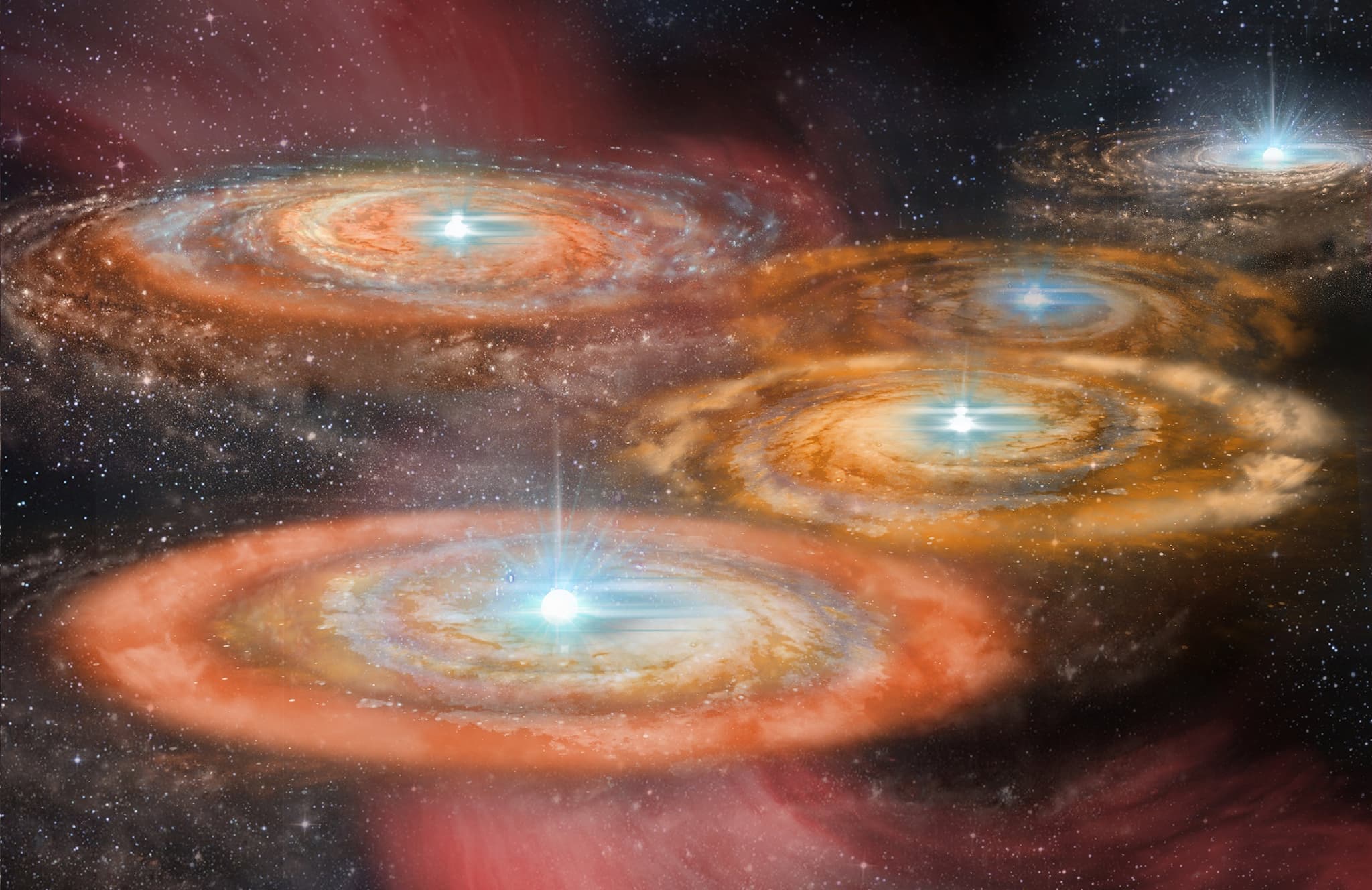 Studying the earliest years in the history of our universe is no easy task. Mostly, this is because we weren't there to see it (obviously), so the only way to get any information on this period is to look to space. In fact, in order to understand this period, we need to look towards the most distant corners of the cosmos—towards the very first stars that were born out of the primordial dark ages.

Ultimately, the very first stars were born just a few hundred million years after the Big Bang. With their birth, they brought an end to the period known as the "dark ages" of the universe. As the name indicates, this is a time when there were light elements (a few atoms of hydrogen and helium had formed), but as nothing shone in visible light.

Since they are so ancient (the Big Bang happened some 14 billion years ago), light from these stars has had to travel for almost 13 billion years, to reach us. As a result, the stars look amazingly faint, and their light signatures are extremely stretched out. The stretching occurs because, as light travels across the cosmos, it is altered by the expansion of the universe. The waves of light get stretched out as space expands, pulled so much that they leave the visible part of the spectrum and enter into the infrared part of the spectrum.

This phenomenon (known as "red shifting") makes these stars very hard to observe; however, two Canadian researchers have managed to calculate what these objects were like, and they found that the first stars could have had periods when they were as luminous as 100 million Suns.

These results were published by Alexander DeSouza and Shantanu Basu, both of the University of Western Ontario in Canada, in a paper in Monthly Notices of the Royal Astronomical Society.

By looking at how the stars would have formed as the clumps of matter fell together, the scientists found that early evolution was chaotic. Massive groups of material would have formed and spiraled into the central disks, creating bursts of luminosity a hundred times brighter than average.

Since the key to this brightness is the falling together of matter, the paper notes that the first stars would have been at their brightest when they were at their youngest—when they were still just protostars in the midst of forming and pulling in material.

Ultimately, even in a small cluster (containing just 10 to 20 protostars) the ongoing bursts would mean the cluster would spend large periods with enhanced brightness. According to the scientists simulations, every so often a cluster of 16 protostars could see its luminosity increase by a factor of up to 1000, to an extraordinary 100 million times the brightness of the Sun.

Unfortunately, as previously mentioned, it is extremely difficult to find these earliest stars or gather any meaningful observations about them; however, the James Webb Space Telescope (JWST) will survey the skies to look for them, and it may change all that. And ultimately, this research gives new hope to the JWST's mission, as the luminosity of an individual first star is likely too faint for JWST to see, but due to their brightness, it will probably be able to see the clusters of the first protostars.

Dr Basu commented: “Seeing the very first stars is a key science goal for JWST and part of astronomers’ quest to track the history of the cosmos. If we’re right, then in just a few years’ time, we could see these enigmatic and dazzlingly bright objects as they came into being, and lit up the universe around them.”

Read This Next
Bangs and Bounces
Scientists Say Stuff Might Have Been Happening Before the Big Bang
Primordial Tap Water
The Early Universe Was a Vast Liquid Ocean, Scientists Say
Big Sky
Scientists Say New Experiment Will Determine "Fate of the Universe"
Really Really Really Old
Astronomers Puzzled By Ancient Milky Way-Like Galaxy 12 Billion Light-Years Away
Little Bang
Scientists Accidentally Recreate Big Bang Detonation in the Lab
More on Hard Science
Tractor Beam
Yesterday on the byte
Scientists Build Working Tractor Beam, Although It's Comically Tiny
Having a Blast
Jan 18 on the byte
New Study Shows Where You Should Hide to Survive a Nuclear Attack
Offworld Amino
Jan 15 on the byte
Scientists Find Building Blocks of Life in Meteor That Smashed Into Family's Driveway
READ MORE STORIES ABOUT / Hard Science
Keep up.
Subscribe to our daily newsletter to keep in touch with the subjects shaping our future.
+Social+Newsletter
TopicsAbout UsContact Us
Copyright ©, Camden Media Inc All Rights Reserved. See our User Agreement, Privacy Policy and Data Use Policy. The material on this site may not be reproduced, distributed, transmitted, cached or otherwise used, except with prior written permission of Futurism. Articles may contain affiliate links which enable us to share in the revenue of any purchases made.
Fonts by Typekit and Monotype.