Did This Planet Survive Getting Swallowed By Its Sun? 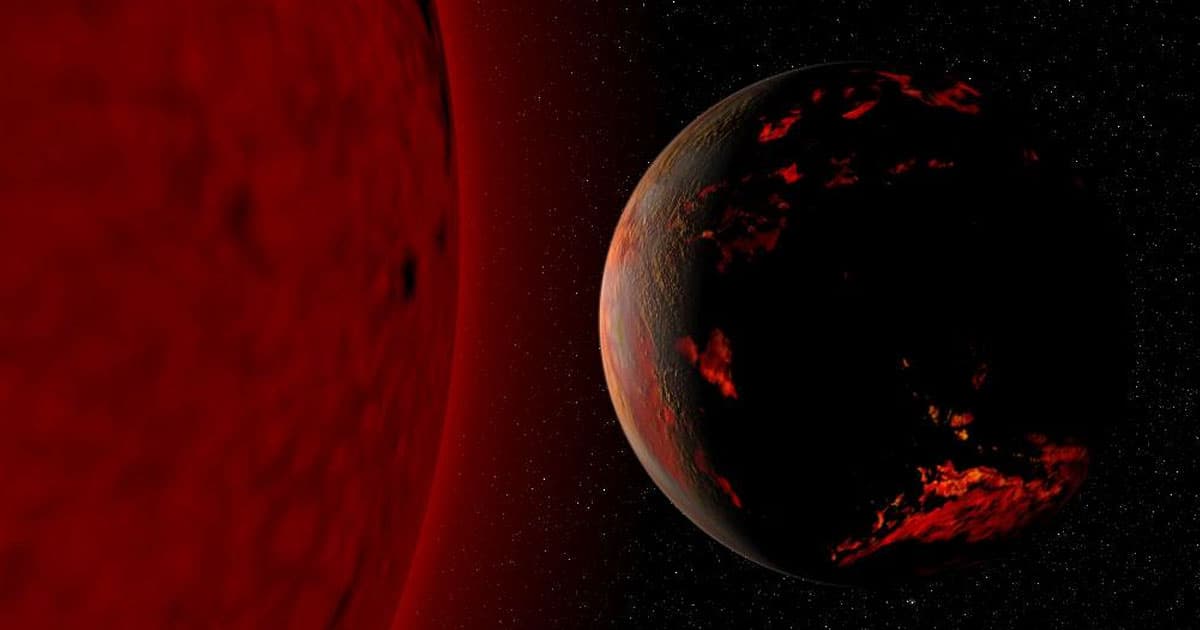 An international team of astronomers have identified a strange exoplanet — which shouldn't exist, according to their calculations.

By examining the oscillations of a star system 364 light-years away, Space.com reports, the team found that an exoplanet was apparently swallowed whole by its star when it turned into a red giant. And yet, somehow, the planet appears to still exist.

The discovery could force astronomers to rethink the way stars live and die — and what happens to their exoplanets.

A star becomes a red giant towards the end of its life cycle, its outer atmosphere ballooning outwards and its outer surface reaching extremely hot temperatures. Depending on its size, it can then explode in a supernova to form a black hole or collapse in on itself into an extremely dense white dwarf.

By analyzing data from NASA's Transiting Exoplanet Survey Satellite, the team concluded that the star probably engulfed its unlocky planet — but that it somehow survived.

"Stellar analysis seems to suggest that the star is too evolved to still host a planet at such a 'short' orbital distance, while from the exoplanet analysis we know that the planet is there!" said Vardan Adibekyan from the Faculdade de Ciências da Universidade do Porto, co-author of a paper published in the Astrophysical Journal last week, in a statement.

There is another possibility that Adibekyan finds likely: the exoplanet's orbit could have moved inward after its star's red giant stage.

"The solution to this scientific dilemma is hidden in the 'simple fact' that stars and their planets not only form but also evolve together," Adibekyan said. "In this particular case, the planet managed to avoid engulfment."

More on astronomy mysteries: Scientists: Something About the Universe Doesn’t Look Right

Read This Next
Against All Odds
If the Readings Are Right, There's Something Very Strange About This Exoplanet
Betelgeuse Betelgeuse Betelgeuse
Astronomers: This Star Isn't As Giant As We Thought, Just Closer
Snap
Scientists Just Took an Actual Picture of a Planet in Another Star System
A Bit On the Nose
An Earth-Sized Planet Is Floating Around Without a Star
Yeet!
This Star Appears to Have Survived a Supernova
More on Hard Science
Warped Tour
Thursday on futurism
Professor Believes Door to Warp Drive May Lie With Ethylene Glycol
Sky Bursts
Thursday on the byte
Astronomers Intrigued by 25 Mysterious Repeating Radio Signals From Deep Space
Tractor Beam
Jan 26 on the byte
Scientists Build Working Tractor Beam, Although It's Comically Tiny
READ MORE STORIES ABOUT / Hard Science
Keep up.
Subscribe to our daily newsletter to keep in touch with the subjects shaping our future.
+Social+Newsletter
TopicsAbout UsContact Us
Copyright ©, Camden Media Inc All Rights Reserved. See our User Agreement, Privacy Policy and Data Use Policy. The material on this site may not be reproduced, distributed, transmitted, cached or otherwise used, except with prior written permission of Futurism. Articles may contain affiliate links which enable us to share in the revenue of any purchases made.
Fonts by Typekit and Monotype.