An Earth-Sized Planet Is Floating Around Without a Star

"The universe could be teeming with rogue planets and we wouldn’t even know it." 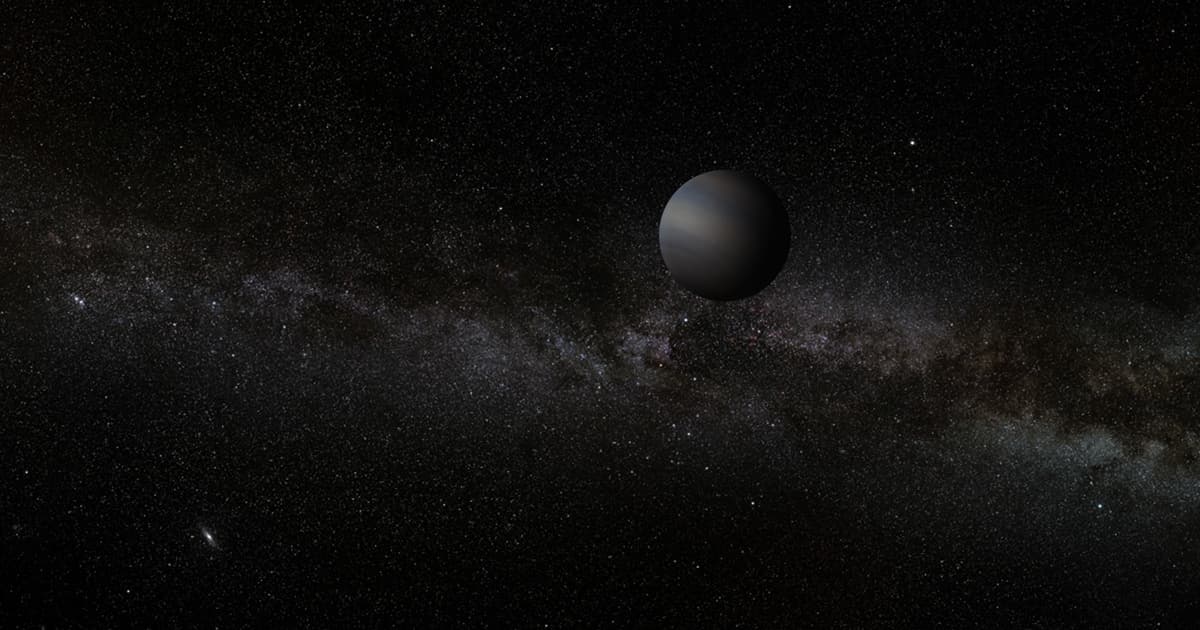 Astronomers have spotted something strange and oddly sad: a rogue planet floating freely, without a star.

It's an example of what astronomers call a "rogue planet." Some are believed to start as normal planets, but leave their stars after colliding with another object that sends them flying into space like a billiard ball. Other rogue planets may also form when clouds of gas and dust implode to form a planet rather than a star.

"The universe could be teeming with rogue planets and we wouldn’t even know it," Scott Gaudi, a professor of astronomy at Ohio State University who helped discover the new planet, said in a NASA statement.

The planet spotted by Gaudi and his colleagues turned out to be roughly the mass of Earth or Mars.

What makes planets like it extremely difficult to spot is that they're very dim, since there are no stars nearby to light them up. That's why we've only spotted a few of these worlds so far.

Making them even more difficult to identify is the fact that they tend to be very cool, meaning that they don't show up on infrared telescopes.

To spot the latest rogue planet, Gaudi's team used a new technique called "microlensing," as detailed in a preprint uploaded to the archive arXiv this week. The technique observes the warping changes the mass has on the fabric of space-time.

Basically, when a rogue planet moves in front of a more distant star, the light from that star bends around the rogue planet from our vantage point as it passes through the warped fabric of space-time near the planet. The more massive the planet, the more extreme the effect.

The team used NASA's Nancy Grace Roman Space Telescope to spot the lonely planet — a feat that would've been impossible without the specialized 'scope, according to the team behind the discovery.

"The microlensing signal from a rogue planet only lasts between a few hours and a couple of days and then is gone forever," Matthew Penny, assistant professor of physics and astronomy at Louisiana State University and c0-author of the paper, said in the NASA statement. "This makes them difficult to observe from Earth, even with multiple telescopes. Roman is a game-changer for rogue planet searches."

Roman is designed to hunt these rogue planets and to see how common they are. Such a discovery could influence the way we understand the formation and evolution of planets.

"We would never find out without undertaking a thorough, space-based microlensing survey like Roman is going to do," Gaudi added.

READ MORE: A Rogue Earth-Mass Planet Has Been Discovered Freely Floating in the Milky Way Without a Star [Universe Today]

More on rogue planets: Life Could Exist On “Rogue Planets” That Don’t Have Stars

Read This Next
Into Darkness
Inside NASA's Bold Proposal to Probe the Mysteries of Dark Matter
Martian Ammonia
NASA Rover Detects Organic Molecules on the Surface of Mars
Myanus, Hisanus, Heranus...
Here's What Uranus Scientists Think About Your Disgusting Jokes
Joseph Strikes Again
Experts Shred Paper Claiming to Identify Mushrooms on Mars
Mars Shrooms
Extremely Dubious Research Claims to Spot Fungus Growing on Mars
More on Hard Science
Quacks Like a Duck
Thursday on futurism
Those Headlines About Scientists Building a Wormhole Are Total Nonsense, People
It From Bit
Nov 22 on the byte
A Scientist Is Crowdfunding an Experiment to Check if We Live in a Simulation
Water Carrying
Nov 20 on the byte
Evidence Grows That Soggy Meteorites Gave Earth Its Oceans
READ MORE STORIES ABOUT / Hard Science
Keep up.
Subscribe to our daily newsletter to keep in touch with the subjects shaping our future.
+Social+Newsletter
TopicsAbout UsContact Us
Copyright ©, Camden Media Inc All Rights Reserved. See our User Agreement, Privacy Policy and Data Use Policy. The material on this site may not be reproduced, distributed, transmitted, cached or otherwise used, except with prior written permission of Futurism. Articles may contain affiliate links which enable us to share in the revenue of any purchases made.
Fonts by Typekit and Monotype.