If the Readings Are Right, There's Something Very Strange About This Exoplanet

"For the first time, we measured the light coming from this planet that shouldn't exist." 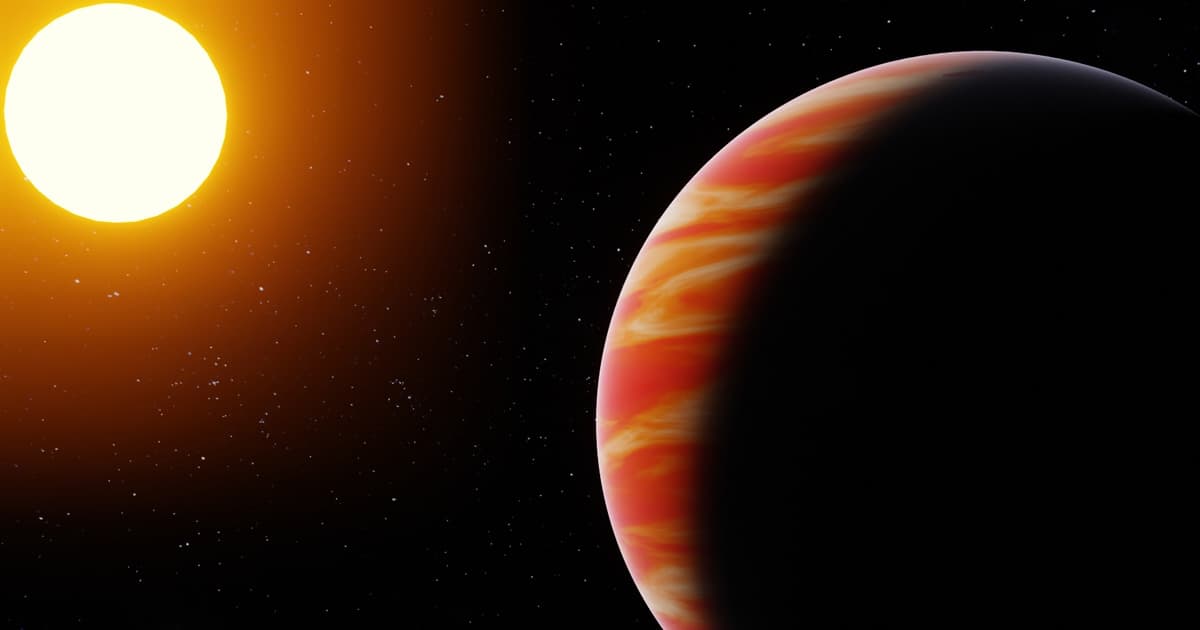 A team of astronomers from the University of Kansas (KU) have discovered evidence for an atmosphere around an extremely hot exoplanet — and it shouldn't exist, they say.

The exoplanet is a "hot Neptune," a giant planet with a mass similar to Uranus or Neptune that orbits so close to its star that its surface is exposed to massive amounts of radiation. Generally speaking, these types of planets end up being much hotter than Neptune.

But there's something unusual about this particular one, dubbed LTT 9779b and located some 260 light years away. By analyzing data from NASA's TESS and Spitzer space telescope, they found it had an atmosphere — despite its scorching temperature.

"For the first time, we measured the light coming from this planet that shouldn't exist," Ian Crossfield, assistant professor of physics and astronomy at KU and lead author of the paper published in the journal Astrophysical Journal Letters, said in a statement.

"This planet is so intensely irradiated by its star that its temperature is over 3,000 degrees Fahrenheit and its atmosphere could have evaporated entirely," he added. "Yet, our Spitzer observations show us its atmosphere via the infrared light the planet emits."

Despite the existence of an atmosphere, LTT 9779b would be a horrible place to live.

"This planet doesn't have a solid surface, and it's much hotter even than Mercury in our solar system — not only would lead melt in the atmosphere of this planet, but so would platinum, chromium and stainless steel," Crossfield said.

"A year on this planet is less than 24 hours — that's how quickly it's whipping around its star. It's a pretty extreme system," he added.

But it's not quite as hot than other exoplanets of its kind.

"The planet is much cooler than we expected, which suggests that it is reflecting away much of the incident starlight that hits it, presumably due to dayside clouds," co-author Nicolas Cowan of the Institute for Research on Exoplanets (iREx) and McGill University in Montreal said in the statement.

The discovery has the team excited about future research.

"I wouldn't say we understand everything about this planet now, but we've measured enough to know this is going to be a really fruitful object for future study," Crossfield said.

In fact, NASA is planning to have a closer look using its long-awaited James Webb Space Telescope.

While it may be extremely inhospitable, the research could lead to us spotting other far more hospitable places in the universe.

"If anyone is going to believe what astronomers say about finding signs of life or oxygen on other worlds, we're going to have to show we can actually do it right on the easy stuff first," Crossfield said. "In that sense these bigger, hotter planets like LTT 9779b act like training wheels and show that we actually know what we're doing and can get everything right."

Read This Next
Futurism
The James Webb Space Telescope Is Going to Stare Straight Into Jupiter
Into Darkness
Inside NASA's Bold Proposal to Probe the Mysteries of Dark Matter
Martian Ammonia
NASA Rover Detects Organic Molecules on the Surface of Mars
Myanus, Hisanus, Heranus...
Here's What Uranus Scientists Think About Your Disgusting Jokes
Joseph Strikes Again
Experts Shred Paper Claiming to Identify Mushrooms on Mars
More on Hard Science
It From Bit
Nov 22 on the byte
A Scientist Is Crowdfunding an Experiment to Check if We Live in a Simulation
Water Carrying
Nov 20 on the byte
Evidence Grows That Soggy Meteorites Gave Earth Its Oceans
Shroom News
Nov 20 on the byte
Scientists Build Circuit Boards Based on Mushrooms
READ MORE STORIES ABOUT / Hard Science
Keep up.
Subscribe to our daily newsletter to keep in touch with the subjects shaping our future.
+Social+Newsletter
TopicsAbout UsContact Us
Copyright ©, Camden Media Inc All Rights Reserved. See our User Agreement, Privacy Policy and Data Use Policy. The material on this site may not be reproduced, distributed, transmitted, cached or otherwise used, except with prior written permission of Futurism. Articles may contain affiliate links which enable us to share in the revenue of any purchases made.
Fonts by Typekit and Monotype.