The End of Humanity and the End of the Earth 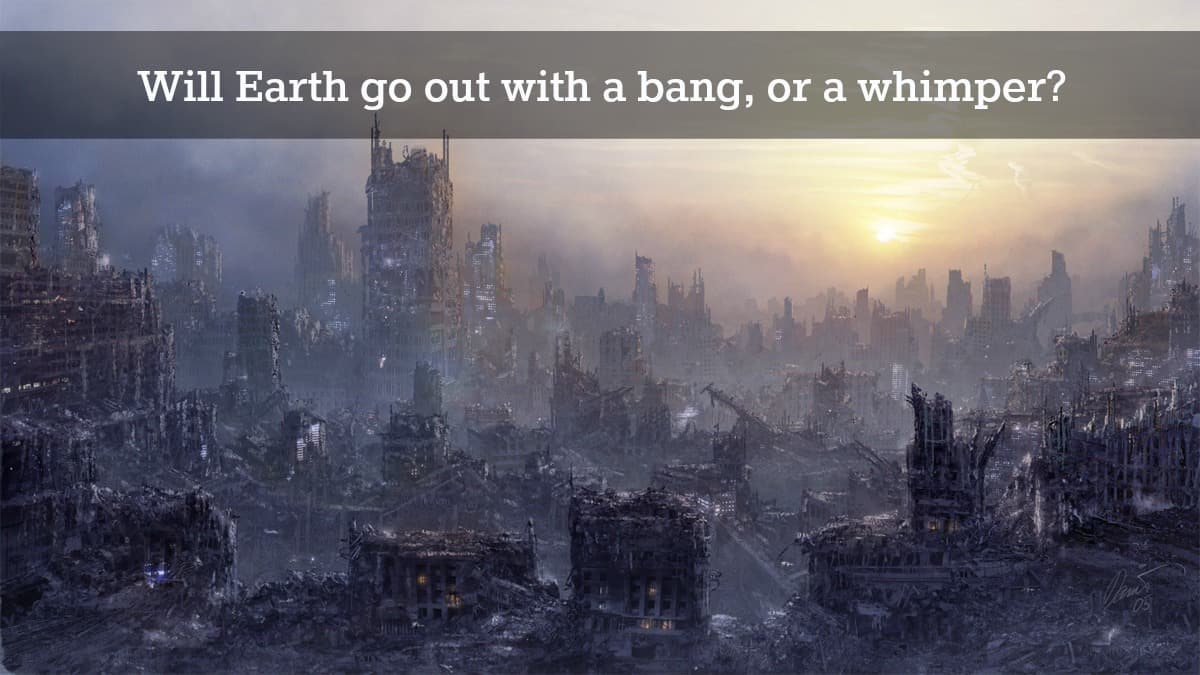 Just as humans are inclined to know Earth's origin, they also seek knowledge of how Earth (and similarly, all life on Earth ) will end. Understandably, there are many different manners in which this could go down. Thus, we can't really give a definitive answer, but we can explore the possibilities of each doomsday scenario -- at least the most interesting and well-known of them.

How will the Earth die?

Ultimately, the answer to this question depends on your definition of ‘death’ when referring to a planet. As an identifiable chunk of rock (and by that I mean a hard, spherical, celestial body), the Earth should be around for a very long time. There are really only three things that could destroy it:

1) A planet-sized asteroid hits Earth, resulting in Earth's mass being smashed up into trillions of little pieces. These pieces could give way to a new asteroid belt, an asteroid cloud, or just generally a bunch of "that used to be Earth" rocks floating around the solar system. Of course, these bits and pieces could coalesce and reform into a new planet -- Earth 2.0

2) When the sun expands into a Red Giant (in about 4.5 billion years), there is a possibility that Earth will be consumed. Of course, even if the planet itself migrates to a higher, more stable orbit, we would orbit closer to the surface of the sun than Mercury does, and Earth will be transformed into a molten wasteland. It is also important to note that, in the next billion years or so, the Sun’s energy output will increase substantially as the Sun's red giant period commences. This process will incinerate life on Earth. Whether or not you consider that ‘dead’ is up to you.

3) Assuming your definition of ‘dead’ is the complete destruction of the planet into a new and unrecognizable form, it is possible that, over the billions or trillions of years Earth floats through space, long after Humanity has left it (or been destroyed), Earth could get captured by a black hole and fall in. In that case, I’d consider Earth pretty dead.

How will Humanity die?

There are about a thousand answers to this question (some we've probably never even thought of). This event would need to wipe out enough of the population to prevent us from recovering as a species. Between natural reproduction, breeding programs, genetic engineering, and cloning, I think it would be very hard for Humans to go completely extinct. Nevertheless...

1) We could destroy ourselves. Either by war, biological weapons, nuclear weapons, or destroying our planet's habitat, we are probably our most immediate threat.

2) The eruption of a supervolcano, a meteor impact, or other serious natural disaster could make life on Earth impossible (or, at least, very difficult).

3) Plague, it’s possible a microbe could be our undoing. This virus could be genetically engineered or created as a byproduct of our sterilization methods (antibiotics, vaccines, etc.). After all, microbes adapt and evolve too. It is also possible that an alien pathogen could wipe out humanity (assuming there is life elsewhere in the universe that is). It could arrive on a meteorite or with an alien visitor (in the same way Small Pox came with the European settlers, killing a large majority of the Native American population). Alternatively, the microbe could be genetically engineered to kill us if an alien race (or another human government) were hostile enough.

4) On the same alien note, and in the mood of Stephen Hawking, if extraterrestrials were to come to Earth and require our planet’s resources, there is very little we could do to stop them. I think it’s safe to say that any species with interstellar capabilities would make quick work of us (so a future war with an alien species could result in our extinction). In science fiction, humans are sometimes able to fight off aliens with our comparatively primitive weapons as it turns into an epic battle between lasers and machine guns. In reality, a civilization only a few thousand years more advanced than us would technologically dwarf anything we know -- it would be more like trying to fight off a Borg invasion with sticks.

5) Humanity could also be destroyed in any number of theories regarding how the universe will ultimately end: The big crunch, the big rip, or the big freeze. Of course, that also assumes humanity is unable to escape the confines of our universe by moving into a different dimension or a different multiversal bubble (but we haven’t proven the existence of a multiverse or other dimensions – that is a post for another time).

6) The human race could end because we evolve beyond being human (that will take hundreds of thousands of years or more, since we no longer adapt to our environment but make our environment adapt to us).

Then, there is always the Fermi Paradox to consider, but that is also a post for another time.

In addition to these, there are many other ways Earth and the Human race could meet our end. We don’t have any data to analyze the survivability of a single species over the course of billions or trillions of years. If we play our cards right, the Human race might live on indefinitely -- jumping from one universe to another or by ascending to another level of existence in a Stargate themed future, or by another method entirely. Only time will tell.

In the meantime, you can see several related articles, dealing not only with the end of Earth or humans, but with the cosmos in general.

3 Bat-shit Insane Apocalyptic Scenarios (and why they won’t occur) & Moving The Earth; A Solution For Global Warming?