Stephen Hawking in a Nutshell 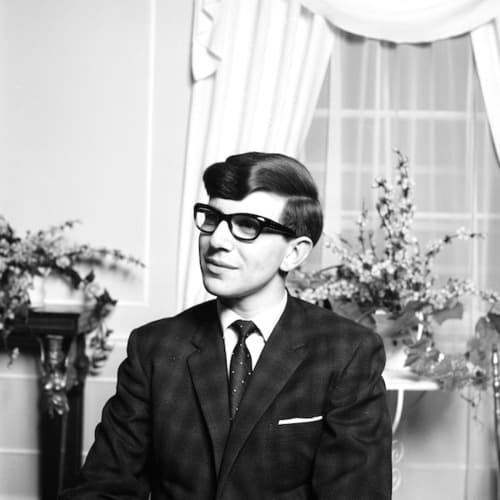 300 years to the day following Galileo's passing, Stephen Hawking was born in Oxford, UK. At the height of World War II, Stephen couldn't have entered the world at a more fractious time. His father, a medical researcher, wanted the best for him, so when Hawking reached the age of eight, he was sent to St Albans High School for Girls (they took pre-adolescent males to the age of 10).

On completing his primary education, he was then sent to St Albans school. His had father wished for him to attend the prestigious Westminster School, but Hawking happened to take ill. Thus he was forced to remain at St Albans. By his own admission, however, he “got an education there that was as good as, if not better than that [he] would have had at Westminster.” As he neared the end of his school years, Hawking wished to pursue the field of mathematics. Once again however, his father stepped in to deny this opportunity. His father desired Hawking to follow in his footsteps and go to Oxford University, which lacked a mathematics department at that time.

In 1962, Hawking obtained a first-class honours degree in natural sciences (specialising in physics) which was a rare feat, but obtained entirely through hard work which Hawking reflects upon: “The prevailing attitude at Oxford at that time was very anti-work. You were supposed to be brilliant without effort, or accept your limitations and get a fourth-class degree. To work hard to get a better class of degree was regarded as the mark of a grey man - the worst epithet in the Oxford vocabulary.”

With his excellent academic record, Hawking gained access to Cambridge University to specialise away from his degree in physics and move into the highly interesting and ever-changing field of general relativity and cosmology. It was at this momentous time in the future of theoretical physics that Hawking was growing increasingly clumsy. After the end of his first semester at Cambridge University, he went to see a doctor.

Following two weeks of tests in 1963, he was diagnosed with motor neurone disease, also known as amyotrophic lateral sclerosis (ALS) or Lou Gherig's disease. Due to the quick deterioration of his condition proceeding diagnosis, the prognosis was very poor indeed; it was stated that he would be unlikely to complete his doctorate (3 years).

Despite the poor prognosis, Hawking had met a woman and fallen in love, and used this as motivation to complete his studies and ultimately to get a job to support his future wife and family. He successfully obtained his PhD in 1966 and became a fellow of Gonville and Caius College at Cambridge University, the first of many accolades he would earn. He then went on to become a professor of gravitational physics at Cambridge in 1977, shortly before becoming the Lucasian Professor of Mathematics at Cambridge University, a position famously previously held by Isaac Newton.

Hawking contributed large amounts of theory to the world of astrophysics that we read and worship this day. Most important were his contributions to the study of black holes. Based upon a discussion between Yakov Zeldovitch and Alexander Starbinsky involving black holes creation of matter, Hawking saw potential in what they stated. He pursued the notion that black holes were not simply just a universal 'vacuum cleaner', but that they were also capable of creation. Following intense study and mathematical calculation, a theory was borne, that of Hawking Radiation which allows for black holes to create matter from energy - two oppositely charged particles.

The theory proceeds to explain that the particle and anti-particle should both cancel each other out. However, if this cannot occur—such as if one particle is destroyed by the black hole prior to annihilating its anti-particle—the other particle continues to exist. Under [latex]E=mc^2[/latex] it is demonstrated that the black holes actually lose mass. As the black hole decays, it has an escaped-particle halo which gradually grows. It reaches a critical point where the halo gets so large, and hot, that at a believed one quadrillion degrees temperature, the black hole explodes. It was theorised that this hugely energetic release could deliver a level of energy that could only be measured in scales of billions of atomic bombs.

His additional black-hole orientated contribution was based around the thinking that IF general relativity were true, AND the Universe is expanding, a singularity MUST have been formed at the creation of the Universe.

Stephen Hawking has defied medical science, and continues to provide theories to explain our universe, working through the most horrendous of diseases in order to inspire, educate and enlighten us with his unequivocal understanding and comprehension of the universe that is around us. Long may he continue to undertake his research and discoveries.

Hawking's greatest work to date is his international best-selling publication, A Brief History of Time, a must-read for anyone even remotely interested in astrophysics (particularly for those of you lacking in a formal physics education). Related books include: The Universe in a Nutshell, On the Shoulders of Giants and The Grand Design.

This article is part of Know Your Scientist, a series on various influential scientists throughout the ages.