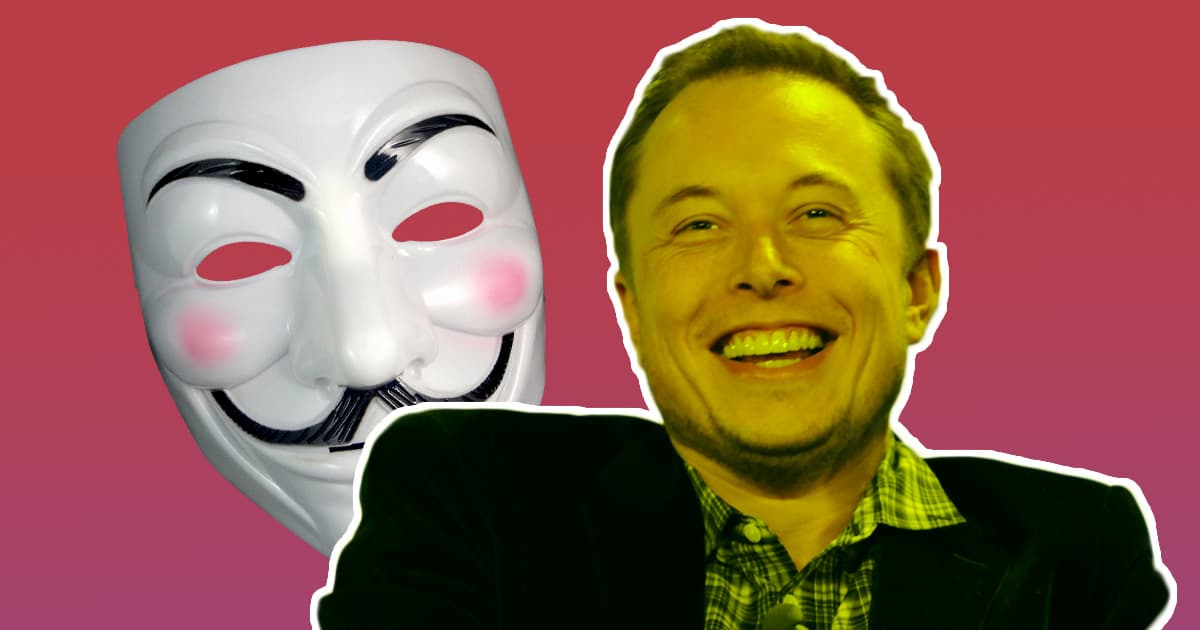 Tesla CEO Elon Musk isn't afraid of Anonymous — or, at least, of folks on the internet who claim to be associated with the hacktivist organization Anonymous.

Over the weekend, an account that claimed to be associated with the group uploaded a video to social media that accused the billionaire of destroying lives by playing the crypto markets.

"You may think that you are the smartest person in the room, but now you have met your match," a robotic voice can be heard saying in the video. "We are Anonymous! We are Legion! Expect us."

The accusations may have fallen on deaf ears. In fact, Musk has chosen to openly mock the video, showing that he's not intimated in any way.

In a satirical sequel titled "Anonymous Part II," uploaded by Tesla investor and Elon Musk fanboy account "Not Financial Advice," the Anonymous voice was revealed to be Gordon Johnson, the CEO and Founder of GLJ Research.

"Wait, wait, wait..." a second, non modulated voice interrupts the purported hacker. "Is this... is this Gordon Johnson?"

"Who is this Jordan Gohnson you speak of?" the anonymous voice replies.

The analyst has been one of Tesla's biggest bears, maintaining that Tesla has been overvalued on Wall Street.

"No Gordon Johnson," the non-modulated voice says in the video. "The guy that has been wrong about Tesla for years now. It's you."

The satirical video seems to have struck a chord, with Musk replying with two laughing emojis on Twitter. The joke is a riff on Musk's ongoing and well-documented battle with short sellers, investors who profit from Tesla shares dropping in the short term.

As Musk's interactions show, the CEO has always liked to stay within his bubble on the social media platform. In many ways, the satirical video was tailor made for him.

The video clearly demonstrates that Musk and his supporters believe the Anonymous video released over the weekend was made by short sellers trying to squeeze a buck out of Tesla with by trying to cover their short positions.

Yet we have very little information about the original intent of the video. Could it have been angry investors, or was the hacktivist group actually behind it, making real accusations of the billionaire destroying lives?

Musk's indecisiveness and flip flopping on Bitcoin has caused an already volatile cryptocurrency to fluctuate even more wildly in recent months. That means, while plenty of people were able to make big bucks, many were left out in the cold.

But as even Musk himself has repeatedly warned, it's not a good idea to stick your life savings in any cryptocurrency.

That leaves the obvious question: should Musk really be blamed for destroying people's lives? To the group that claims to be Anonymous, there's a straightforward answer.

The actual situation, of course is a lot more complicated than that. While cryptocurrencies have gained a lot of support from all sides of the market recently, its volatility still makes it an extremely risky investment.

Read This Next
Going Wireless
Hackers Took Over a Subdomain of Wired.com for Several Months and Replaced It With Sleazy Online Casino Content
Enemy Mine
Elon Musk Now Denies That His Family's Emerald Mine Existed, In Spite of Previously Bragging About It
Bot Rush
An Overwhelming Number of Porn Bot Accounts "Drowned Out" Chinese Protest Content on Twitter
Hardcore Mode
Even Twitter's Intern Just Resigned in Disappointment
This is Exhausting
Elon Musk Seems to Be Trying to Weasel Out of Vote to Resign
More on Future Society
Musk Rats
Yesterday on the byte
Twitter Is Quietly Re-Suspending the Lunatics Elon Musk Let Back On
Spreadsheet Guy
Tuesday on the byte
Sam Bankman-Fried Posts Excel Docs That He Says Shows Nothing Was His Fault
Nip Split
Jan 22 on the byte
Meta Board Trashes Facebook's "Convoluted and Poorly Defined" Female Nipple Rule
READ MORE STORIES ABOUT / Future Society
Keep up.
Subscribe to our daily newsletter to keep in touch with the subjects shaping our future.
+Social+Newsletter
TopicsAbout UsContact Us
Copyright ©, Camden Media Inc All Rights Reserved. See our User Agreement, Privacy Policy and Data Use Policy. The material on this site may not be reproduced, distributed, transmitted, cached or otherwise used, except with prior written permission of Futurism. Articles may contain affiliate links which enable us to share in the revenue of any purchases made.
Fonts by Typekit and Monotype.