Elon Musks Criticizes "Some Companies," Then Fake-Coughs and Mutters "Apple"

Is Musk calling the kettle black? 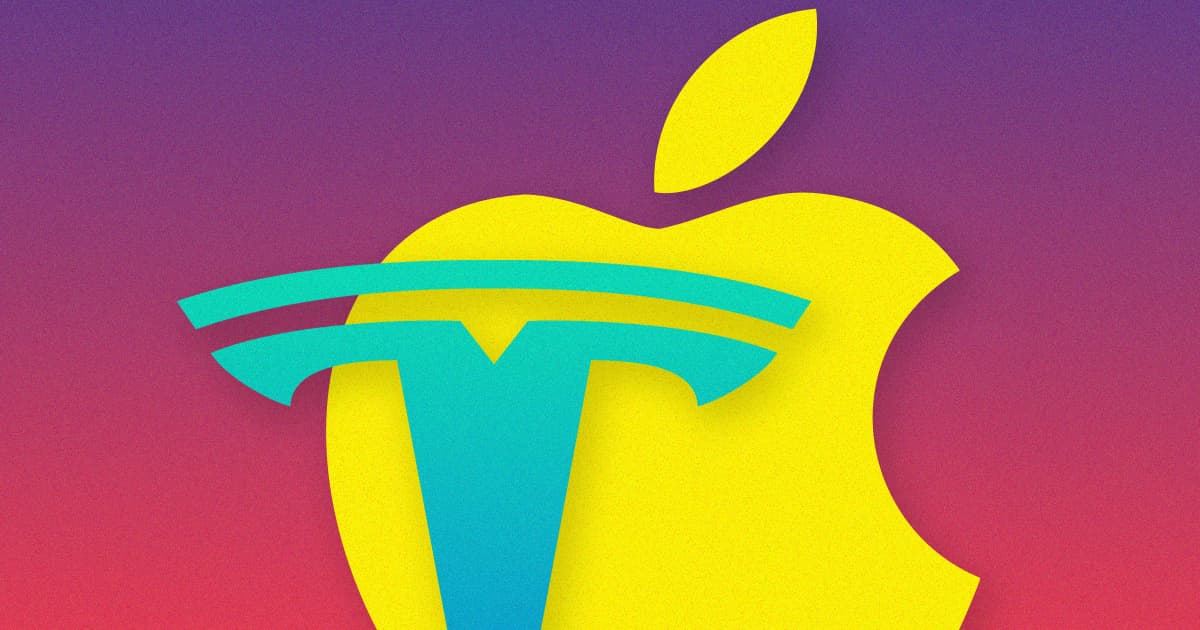 "I think we want to emphasize that our goal is to support the advent of sustainable energy," Musk said during the call. "It is not to create a walled garden and use that to bludgeon our competitors which is used by some companies."

As CNBC reported, though, he accompanied those remarks by fake-coughing and muttering "Apple."

Apple's infamous "walled garden," which gives users access to a rich software ecosystem over which the megacorporation has near-total control, has led to significant brand lock-in and even antitrust investigations, particularly in the European Union.

But Musk may be calling the kettle black by throwing shade at Apple's well-groomed estate. Tesla vehicles have often been likened to Apple's iPhone: a technological leap — but with a hidden cost that puts the manufacturer, not the consumer, in control.

It could also be an early sign of increasing competition for Tesla. Apple has long been working on developing its own electric vehicle — but an Apple-built car isn't likely to roll off the lot any time soon.

Musk has often promised to make his car company's underlying technologies open to the public for any competitor to access. In reality, however, Tesla's choices have often veered significantly from that vision.

For the time being, its Supercharger network relies on proprietary technologies, allowing only Teslas to make use of them. Tesla has also historically made it extremely difficult — and at times exceedingly expensive —  to service its vehicles, shutting out the efforts of independent repair shops.

In November, Massachusetts voters overwhelmingly supported a right to repair ballot initiative for vehicles, effectively forcing manufacturers to make sure that third party mechanics have access to the same diagnostic tools as affiliated shops.

Tesla, meanwhile, started contacting its customers in the state to vote against the initiative.

"Tesla has long applied an open source philosophy to our patented intellectual property for electric vehicles," the automaker wrote in an email to its Massachusetts customers, as quoted by Electrek.

Despite releasing access to "service, parts, and body repair manuals, wiring diagrams, service bulletins, labor codes and times" to the public, Tesla argued at the time that the ballot initiative "goes well beyond what is necessary to perform this work, and it potentially jeopardizes vehicle and data security."

It's a line of reasoning we've heard many times from Apple as well. The tech giant has repeatedly attempted to block right to repair bills in several states, citing safety and security concerns. Apple has limited access to its diagnostic and repair tools to "authorized service providers" while leaving independent repair shops in the dark.

Both Apple and Tesla have also made sourcing repair parts very difficult, making it near impossible for customers to repair their own vehicles or devices.

In fact, a Model 3 leasee recently discovered that Tesla wanted more than $16,000 for an entire battery pack replacement after hitting some road debris. An independent servicing shop was later able to fix the issue for a mere $700 by patching up a severed coolant line.

Similarly, Apple's mobile devices also can cost a fortune to be repaired — especially if said repairs don't fall under the company's separately-sold Apple Care warranty. A simple out-of-warranty screen repair can cost as much as $429 for a top of the line iPhone.

Apart from expensive physical repairs, Tesla has pioneered a software-first approach to building cars. Its cars rely on sophisticated sensors, giving drivers a great degree of freedom while commuting to work. To their credit, Tesla is actively trying to license its Autopilot software other manufacturers, but for now, the tech is exclusively used by Teslas.

Tesla is also ultimately in control of customers' vehicles by issuing over-the-air software updates. To the company, it's a convenient way to enhance the experience. To many customers however, some updates could come at a cost.

A Norwegian court, for instance, found Tesla guilty in May for throttling the battery life of Tesla vehicles, thereby decreasing their range and increasing the time they take to charge.

"Tesla is not an automotive company, it’s a tech company that builds cars," a former employee who worked for both Apple and Tesla told The Washington Post in May.

To take aim at Apple for creating a "walled garden" to beat out the competition certainly sounds disingenuous at best. Tesla has blazed its own path by building cars that are increasingly difficult and expensive to repair, qualities that both Apple and Tesla share.

More on Tesla: Elon Musk Warns That Each Cybertruck Could Cost “Literally a Million Dollars”