Scientists Found a Galaxy With Almost No Dark Matter. Here's What That Means.

"It is literally a see-through galaxy.” 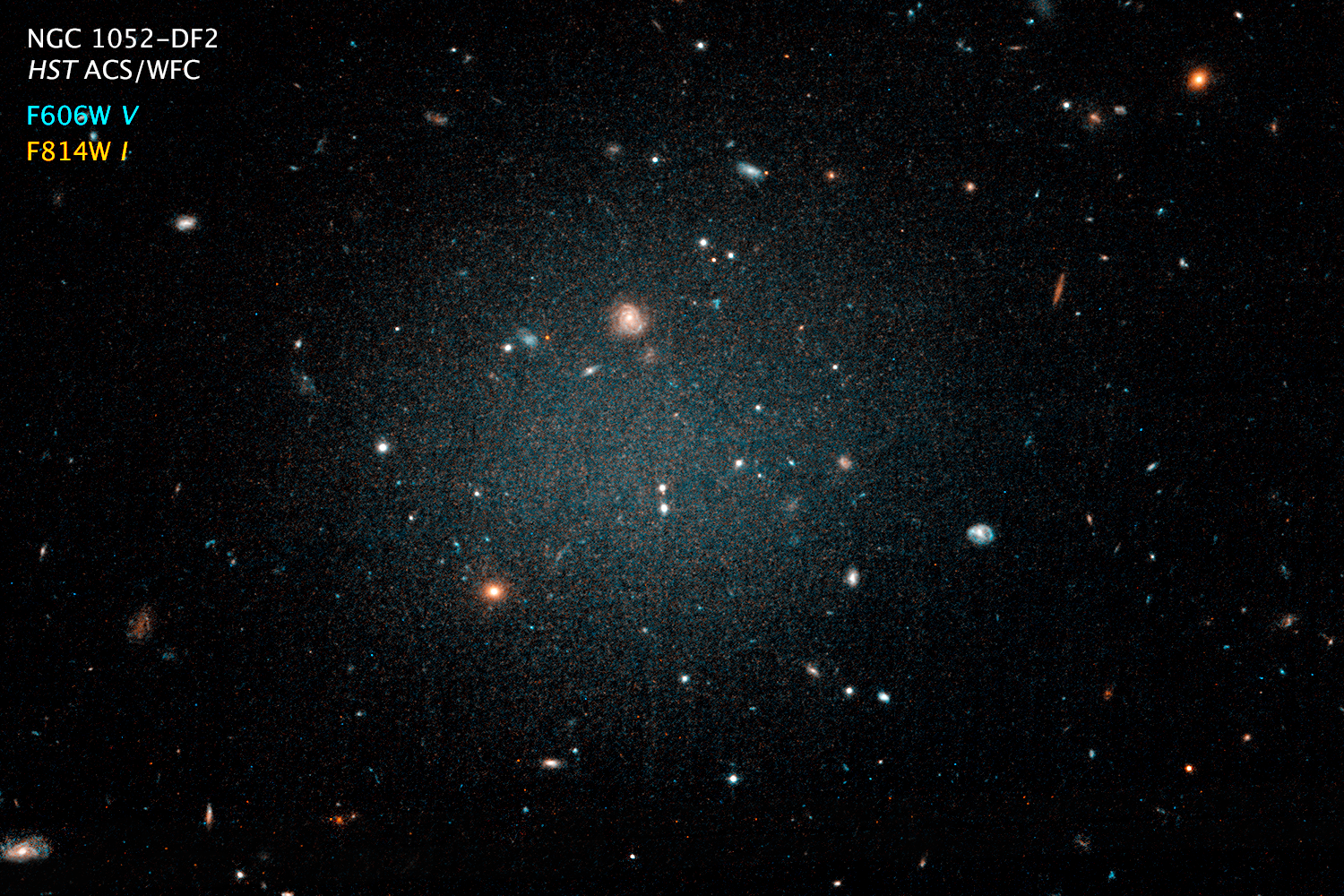 Roughly 65 million light-years away from Earth is a galaxy called NGC 1052-DF2 (DF2 for short). But DF2 may as well be called F-U, because that's what it's saying to scientists who thought they understood galaxies, dark matter, and really anything about our universe.

What makes DF2 so special, you may ask? It appears to contain virtually no dark matter.

We've never seen dark matter directly. We only believe dark matter exists because we can see how it affects "regular," or baryonic, matter. Based on these indirect observations, researchers have estimated that dark matter makes up about 27 percent of our universe.

Since dark matter was (sort of) discovered, researchers assumed dark matter was essential to galaxy formation. Dark matter would clump together. Then, the gravity from those clumps would attract baryonic matter, forming the stars, planets, and other objects we can actually see within a galaxy. Easy, right?

"It challenges the standard ideas of how we think galaxies work," Pieter van Dokkum, a Yale University professor and lead author of a paper on DF2, now published in Nature, said in a press release. "This result also suggests that there may be more than one way to form a galaxy."

DF2 is unique in other ways, too. It doesn't fit the characteristics of a spiral galaxy, which typically have dense, central regions, spiral arms, and a disk. But it also isn't like known elliptical galaxies, which have a black hole at their center.

Instead, DF2 is a rare ultra-diffuse galaxy. "It's so sparse that you see all of the galaxies behind it," van Dokkum said. "It is literally a see-through galaxy."

This might seem counterintuitive, but DF2 actually supports the existence of dark matter, which some theories argue doesn't exist.

"For those kinds of theories, it wouldn't be possible to ever have a galaxy that looks as though it doesn't have dark matter," Jocelyn Monroe, a particle physicist and dark matter expert at Royal Holloway, University of London, who was not involved in the study, told The Verge. "So [this galaxy is] really interesting for the potential it has to exclude some of these ideas."

If DF2 does end up being 13 billion years old, it could rack in another superlative: the oldest galaxy ever discovered.

Read This Next
Bangs and Bounces
Scientists Say Stuff Might Have Been Happening Before the Big Bang
Dark Secrets
Scientists Just Detected the Oldest Dark Matter Ever Observed
Walled Up
Scientists Say Space Is Filled With Invisible Walls
Turn Back Time
Scientists Say There May Be a Mirror Universe in Which Time Runs Backwards
Into Darkness
Inside NASA's Bold Proposal to Probe the Mysteries of Dark Matter
More on Hard Science
Warped Tour
Feb 2 on futurism
Professor Believes Door to Warp Drive May Lie With Ethylene Glycol
Sky Bursts
Feb 2 on the byte
Astronomers Intrigued by 25 Mysterious Repeating Radio Signals From Deep Space
Tractor Beam
Jan 26 on the byte
Scientists Build Working Tractor Beam, Although It's Comically Tiny
READ MORE STORIES ABOUT / Hard Science
Keep up.
Subscribe to our daily newsletter to keep in touch with the subjects shaping our future.
+Social+Newsletter
TopicsAbout UsContact Us
Copyright ©, Camden Media Inc All Rights Reserved. See our User Agreement, Privacy Policy and Data Use Policy. The material on this site may not be reproduced, distributed, transmitted, cached or otherwise used, except with prior written permission of Futurism. Articles may contain affiliate links which enable us to share in the revenue of any purchases made.
Fonts by Typekit and Monotype.