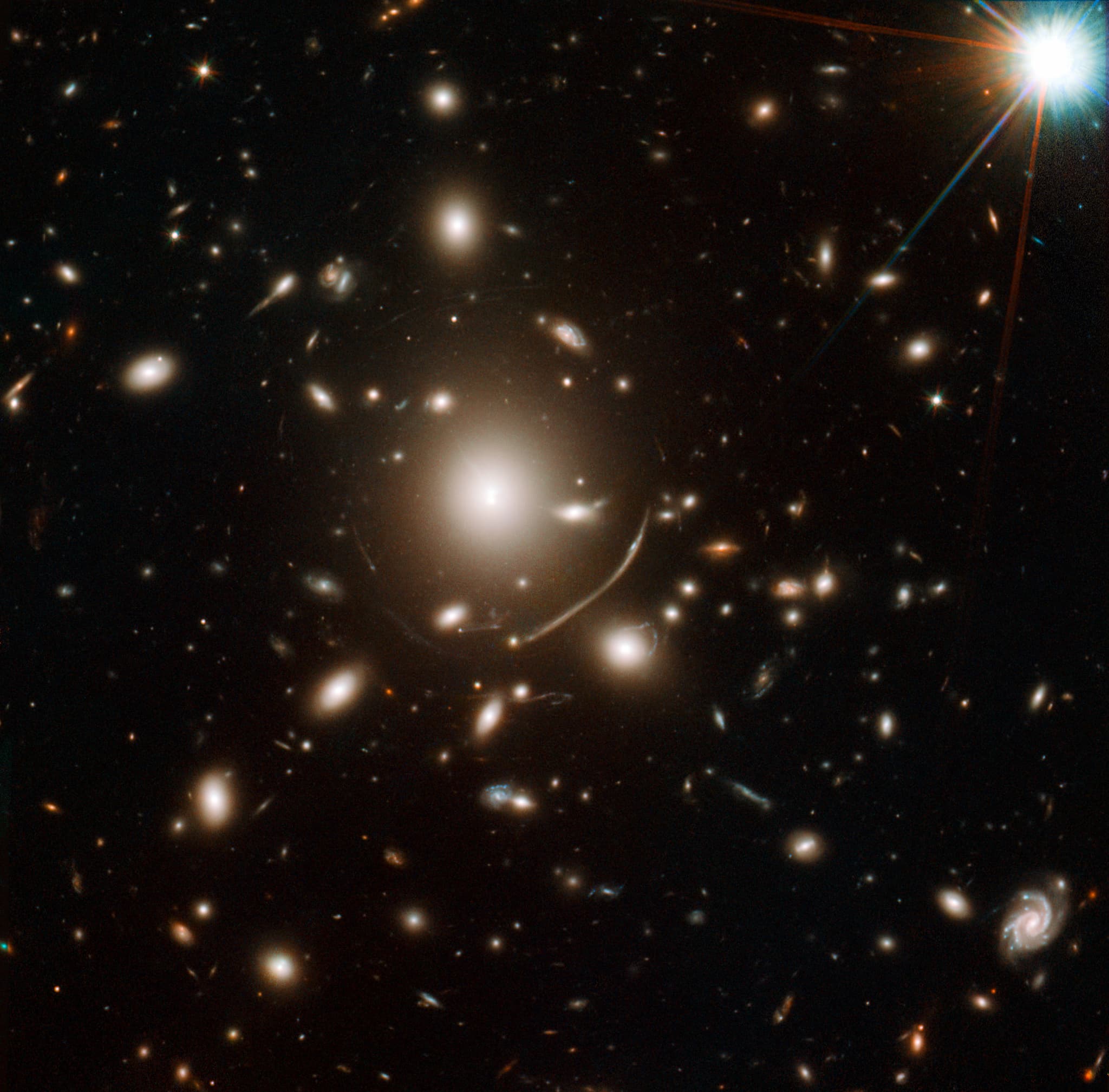 It's thought that dark matter makes up as much as a quarter of all matter in the universe, but we know very little about it because it has never been directly observed and it is exceedingly difficult to study. Now, new research might indicate that entirely new physics is required to properly understand its behavior.

A team of Swiss, French, and British astronomers has used the Hubble Space Telescope to analyze galaxy clusters. The current cold dark matter model suggests that the brightest cluster galaxy (BCG) located in the center of one of these clusters will stay in place after a merging event, thanks to the gravitational influence of dark matter.

However, this study found that BCGs actually "wobble" long after the cluster has returned to a relaxed state. The visible area of each cluster and the center of its mass were observed to be offset by as much as 40,000 lightyears.

The researchers were able to determine this because the clusters serve as gravitational lenses, as their sheer scale means that they warp spacetime, which affects the light coming from objects beyond their location. This makes it possible to ascertain the exact position of the center of mass, and measure how far offset the BCG is.

A Shot in the Dark

The wobbling that was observed by this study is a fairly mysterious phenomenon, which offers up its own questions. However, if it is being caused by dark matter, then our current understanding of its properties is inaccurate.

Dark matter particles, if they are indeed responsible, would have to be able to interact with one another to cause this motion, which contradicts current thinking on the nature and behavior of the particles. This would suggest that we need to establish entirely new physics to properly explain our many remaining questions about dark matter.

The next step for this investigation is to look at larger datasets that might reveal more about the observed activity. The ESA's Euclid spacecraft could provide this information – but it's set to launch in late 2020, so it will be a few years before this vein of study is used to advance our understanding of dark matter.

"We’re looking forward to larger surveys — such as the Euclid survey — that will extend our dataset," commented co-author Frederic Courbin of the EPFL. "Then we can determine whether the wobbling of BGCs is the result of a novel astrophysical phenomenon or new fundamental physics. Both of which would be exciting!”

Read This Next
Dark Secrets
Scientists Just Detected the Oldest Dark Matter Ever Observed
Walled Up
Scientists Say Space Is Filled With Invisible Walls
Turn Back Time
Scientists Say There May Be a Mirror Universe in Which Time Runs Backwards
Into Darkness
Inside NASA's Bold Proposal to Probe the Mysteries of Dark Matter
Was Al Wrong?
New Evidence About the Universe Suggests Einstein Was Wrong
More on Hard Science
Quacks Like a Duck
Yesterday on futurism
Those Headlines About Scientists Building a Wormhole Are Total Nonsense, People
It From Bit
Nov 22 on the byte
A Scientist Is Crowdfunding an Experiment to Check if We Live in a Simulation
Water Carrying
Nov 20 on the byte
Evidence Grows That Soggy Meteorites Gave Earth Its Oceans
READ MORE STORIES ABOUT / Hard Science
Keep up.
Subscribe to our daily newsletter to keep in touch with the subjects shaping our future.
+Social+Newsletter
TopicsAbout UsContact Us
Copyright ©, Camden Media Inc All Rights Reserved. See our User Agreement, Privacy Policy and Data Use Policy. The material on this site may not be reproduced, distributed, transmitted, cached or otherwise used, except with prior written permission of Futurism. Articles may contain affiliate links which enable us to share in the revenue of any purchases made.
Fonts by Typekit and Monotype.