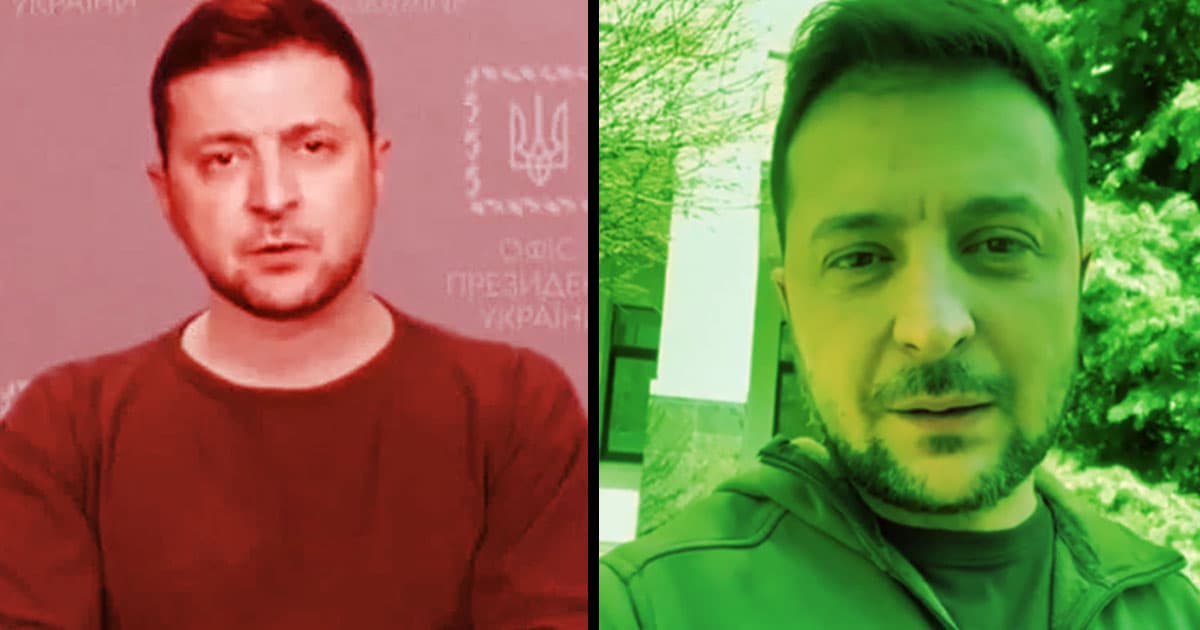 A deepfake video of Ukrainian president Volodymyr Zelenksy calling on his country's troops to surrender to Russian forces reportedly made it onto a hacked Ukrainian news site today after going viral on Facebook, The Daily Dot reports.

According to the report, it may be the first deepfake created to deceive opponents during Russia's invasion of Ukraine.

While the video isn't the cleanest or convincing example of deepfake technologies — it's clearly not the real Zelenksy in the video as, for one, the head is far too big for the body — it's an ominous example of a troubling new weapon in the arsenal of a world power: faked videos of statements made by enemy political leaders.

The real Zelenksy was quick to respond to the deepfake in a separate video posted to Facebook, calling for Russians to surrender instead.

"If I can offer someone to lay down their arms, it’s the Russian military," he said in the video. "Go home. Because we’re home. We are defending our land, our children, and our families."

According to disinformation watchdog the Atlantic Council’s Digital Forensic Research Lab (DFRLab), the video was aired on a hacked news program.

"This is a fake!" Ukrainian outlet wrote in an Instagram post, as translated by Google. "Friends, we have repeatedly warned about this. Nobody is going to give up."

Facebook's parent company Meta has since taken down the troubling video.

"Earlier today, our teams identified and removed a deepfake video claiming to show President Zelensky issuing a statement he never did," the company's head of security policy Nathaniel Gleicher tweeted. "It appeared on a reportedly compromised website and then started showing across the internet."

"We've quickly reviewed and removed this video for violating our policy against misleading manipulated media, and notified our peers at other platforms," Gleicher added in a follow-up.

The topic of disinformation has hit fever pitch as Russian troops turn major Ukrainian cities into rubble. Hackers are waging a secondary war online, taking down government websites and interfering with military operations.

It's not even the only deepfake video to surface today, with a similar video of a deepfaked Russian president Vladimir Putin declaring victory also making the rounds.

Meanwhile, Russia is shutting itself off from the world. The news comes after both Facebook and Instagram were completely blocked by Russian authorities earlier this month.

But without major social media platforms, Russia has cut off a massive distribution channel of its own state propaganda as well.

It's unclear, notably, if the deepfake video actually had its targeted effect of sowing confusion or even convincing Ukrainians to surrender to the enemy. Whether a deepfake ever will remains an open question.

More on Ukraine: Space Conference Censors Name of First Human in Space Because He Was Russian

Read This Next
Burning Bridges
Elon Musk Says He Can't Give Free Starlink to Ukraine Anymore After Officials There Were Mean to Him
Read the Room
Elon Musk Fans Horrified as He Suggests Ukraine Give in to Putin's Demands
Deep and Very Fake
Bruce Willis Signs Deal to Get Deepfaked Into Future Movies
Finger Pointing
Russia Warns That Nuclear Plant It Captured May Leak Waste Over Europe
Sobering News
Ukrainian Hackers Allegedly Cut Off Russian Soldiers' Beloved Vodka Supply
More on Future Society
Finders Keepers
Yesterday on the byte
China Wants the Corpse of Its Balloon Back After the US Killed It With a Missile
Rough
Monday on futurism
Elon Musk's Twitter Is Reportedly Failing Miserably to Contain Horrific Child Abuse Content
YouTube Propaganda
Monday on the byte
Experts Say There's Something Very Weird About North Korean YouTubers
READ MORE STORIES ABOUT / Future Society
Keep up.
Subscribe to our daily newsletter to keep in touch with the subjects shaping our future.
+Social+Newsletter
TopicsAbout UsContact Us
Copyright ©, Camden Media Inc All Rights Reserved. See our User Agreement, Privacy Policy and Data Use Policy. The material on this site may not be reproduced, distributed, transmitted, cached or otherwise used, except with prior written permission of Futurism. Articles may contain affiliate links which enable us to share in the revenue of any purchases made.
Fonts by Typekit and Monotype.