Chinese Rover Discovers It's Sitting on 39 Feet of Moon Dust

"That’s a lot of regolith." 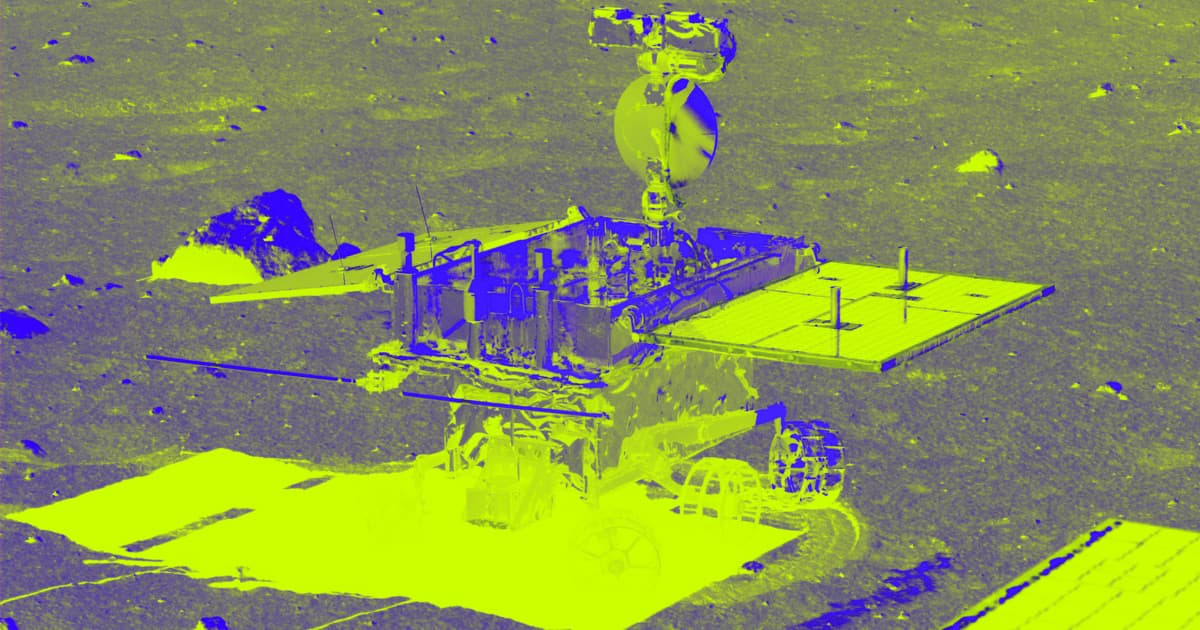 Researchers at the Chinese Academy of Sciences in Beijing have started analyzing data collected by the country's Yutu-2 Moon rover's ground-penetrating radar. The instrument peered 40 meters (131 feet) below the lunar surface — and found it was sitting on top of a mountain of fine dust.

China's Chang'e 4 lander touched down on the far side of the Moon in January 2019, becoming the first man-made object to do so. Shortly after, it deployed the rover Yutu-2 from its belly. The rover has been exploring the South Pole-Aitken basin, the largest and oldest crater on the Moon, ever since.

Using high-frequency radar to look beneath the surface, it found that it was sitting on top of 12 meters (39 feet) of fine Moon dust, as detailed in a paper published in the journal Science Advances on Wednesday.

"That’s a lot of regolith," David Kring, senior scientist at the Lunar and Planetary Institute in Houston who was not involved in the research, told The New York Times. "That’s food for thought."

The fine particles were likely the result of many small meteorite collisions and a ton of solar radiation, as New Scientist reports.

Below the dust, between 12 and 24 meters (39 and 79 feet), the rover spotted larger rocks, likely what's left of larger asteroid and meteorite impacts. Further below that, the rover detected alternating layers of fine and coarser soil.

Most noteworthy is the striking difference between the new readings and the ones taken at Chang'e 4's landing site, where measurements suggested it landed on top of a dense lava layer buried below the surface, the remains of a volcanic event.

"The subsurface structure at the Chang’e 4 landing site is more complex, and suggests a totally different geological context,” Yan Su, co-author from the Chinese Academy of Sciences, told New Scientist.

READ MORE: China’s rover has discovered what lies beneath the moon’s far side [New Scientist]

Read This Next
ET Phone Home
NASA Funds Giant Radio Telescope Concept on Far Side of Moon
More on Hard Science
Having a Blast
Jan 18 on the byte
New Study Shows Where You Should Hide to Survive a Nuclear Attack
Offworld Amino
Jan 15 on the byte
Scientists Find Building Blocks of Life in Meteor That Smashed Into Family's Driveway
Triple Threat
Jan 4 on the byte
Traveling Faster Than Light Would Mean Experiencing Multiple Timelines Simultaneously
READ MORE STORIES ABOUT / Hard Science
Keep up.
Subscribe to our daily newsletter to keep in touch with the subjects shaping our future.
+Social+Newsletter
TopicsAbout UsContact Us
Copyright ©, Camden Media Inc All Rights Reserved. See our User Agreement, Privacy Policy and Data Use Policy. The material on this site may not be reproduced, distributed, transmitted, cached or otherwise used, except with prior written permission of Futurism. Articles may contain affiliate links which enable us to share in the revenue of any purchases made.
Fonts by Typekit and Monotype.