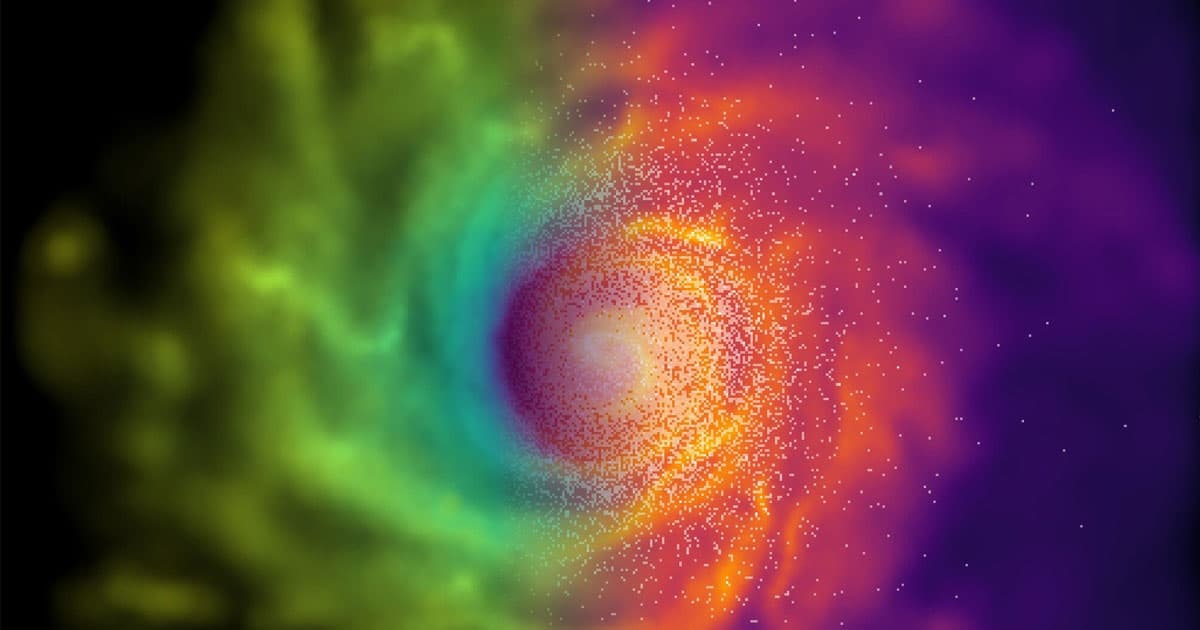 Einstein's gravity-explaining theory of general relativity may not tell the complete story of how galaxies and black holes formed throughout the universe.

New supercomputer simulations implementing something called Chameleon Theory provide an alternative explanation for how galaxies formed, and may also help scientists understand dark energy, according to a University of Durham press release. Chameleon Theory is a new theory of gravity in which the effects of gravity can fluctuate and change based on the environment. That's in stark contrast from general relativity, in which gravitational force is treated as a constant. General relativity has been experimentally validated, but the models show that Chameleon Theory can't be ruled out as an alternative, as a universe acting according to the new theory would still form the same kind of galaxies and black holes.

The main difference between the two is that general relativity treats dark energy — the mysterious, yet-undetected force thought to be pushing the universe apart — as a sort of uniform constant. The simulations of Chameleon Theory, described in research published Monday in the journal Nature Astronomy, instead treat that force as a changing variable. Tweaking the variables of dark energy and gravity in the simulation affected the amount of cosmic gases that supermassive black holes consumed and burned away, which in turn determined how many stars form in a galaxy.

"Chameleon Theory allows for the laws of gravity to be modified so we can test the effect of changes in gravity on galaxy formation," Durham computational cosmologist Christian Arnold said in the press release. "Through our simulations we have shown for the first time that even if you change gravity, it would not prevent disc galaxies with spiral arms from forming."

Chameleon Theory doesn't by any means debunk general relativity, though. Models for both general relativity and Chameleon Theory gave rise to realistic galaxies. However, the newly vindicated models suggest that there could be multiple scientific ways to make sense of the universe — by tweaking the behavior of gravity on a cosmological scale, the Durham scientists behind the study think they have a shot at figuring out what dark energy really is.

"Our research definitely does not mean that general relativity is wrong, but it does show that it does not have to be the only way to explain gravity's role in the evolution of the universe."

READ MORE: Supercomputer shows 'Chameleon Theory' could change how we think about gravity [University of Durham via Phys.org]

Read This Next
Hubble Tension
Most Precise Measurements of the Universe Suggest That Something Is Very Wrong
Space Lumps
Scientists Say We May Be Extremely Wrong About the Universe
Into Darkness
Inside NASA's Bold Proposal to Probe the Mysteries of Dark Matter
Good Samaritan
Physics Dept Gets Random Box Full of $180K in Untraceable $50s and $100s
Myanus, Hisanus, Heranus...
Here's What Uranus Scientists Think About Your Disgusting Jokes
More on Hard Science
It From Bit
Nov 22 on the byte
A Scientist Is Crowdfunding an Experiment to Check if We Live in a Simulation
Water Carrying
Nov 20 on the byte
Evidence Grows That Soggy Meteorites Gave Earth Its Oceans
Shroom News
Nov 20 on the byte
Scientists Build Circuit Boards Based on Mushrooms
READ MORE STORIES ABOUT / Hard Science
Keep up.
Subscribe to our daily newsletter to keep in touch with the subjects shaping our future.
+Social+Newsletter
TopicsAbout UsContact Us
Copyright ©, Camden Media Inc All Rights Reserved. See our User Agreement, Privacy Policy and Data Use Policy. The material on this site may not be reproduced, distributed, transmitted, cached or otherwise used, except with prior written permission of Futurism. Articles may contain affiliate links which enable us to share in the revenue of any purchases made.
Fonts by Typekit and Monotype.