Your Bones Are Made Out of Exploded Stars, Scientists Say

"[The supernova] wasn't just calcium rich. It was the richest of the rich." 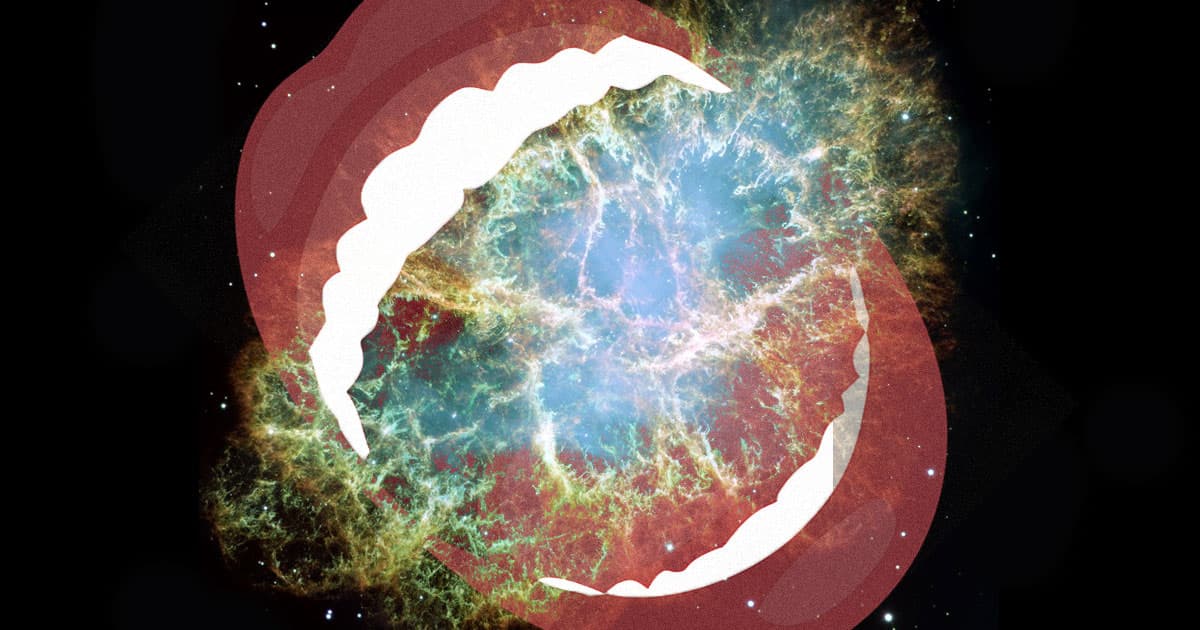 According to new research, half the calcium in our universe came from "calcium-rich supernova." That means the stuff our teeth and bones is made from is, essentially, the remains of dead stars that blew up a long, long time ago.

"These events are so few in number that we have never known what produced calcium-rich supernova," said Wynn Jacobson-Galan, Northwestern graduate student and lead author of the new study published in The Astrophysical Journal this week, in a statement.

"By observing what this star did in its final month before it reached its critical, tumultuous end, we peered into a place previously unexplored, opening new avenues of study within transient science," Jacobson-Galan added.

An extremely bright event some 55 million light years from Earth grabbed the attention of the international astronomy community in April 2019. "Every single country with a prominent telescope turned to look at this object," Jacobson-Galan recalled.

Astronomers were so quick that many observed the supernova just ten hours after the explosion. "The explosion is trying to cool down," Raffaella Margutti from Northwestern University and a senior author of the study, explained in the statement. "It wants to give away its energy, and calcium emission is an efficient way to do that."

As it turns out the explosion spewed out an immense amount of calcium. "It wasn't just calcium rich," Margutti said. "It was the richest of the rich."

They caught the event just in time to conclude that it was the most calcium to have ever been observed to be emitted from just a single event.

"The luminosity tells us how much material the star shed and how close that material was to the star," Jacobson-Galan explained. "In this case, the star lost a very small amount of material right before it exploded. That material was still nearby."

More on supernovae: This Star Appears to Have Survived a Supernova

Read This Next
Strange Stars
Astronomers Puzzled by Extremely Peculiar Object in Deep Space
zombie star
Scientists Puzzled by Star That Exploded in Supernova But Somehow Survived
Betelgeuse Betelgeuse Betelgeuse
Astronomers: This Star Isn't As Giant As We Thought, Just Closer
Fall Out Boy
Scientists: Earth Moving Through Radioactive Debris of Exploded Stars
Big Blast
Scientists: Exploding Star Likely Caused Mass Extinction on Earth
More on Hard Science
Warped Tour
Thursday on futurism
Professor Believes Door to Warp Drive May Lie With Ethylene Glycol
Sky Bursts
Thursday on the byte
Astronomers Intrigued by 25 Mysterious Repeating Radio Signals From Deep Space
Tractor Beam
Jan 26 on the byte
Scientists Build Working Tractor Beam, Although It's Comically Tiny
READ MORE STORIES ABOUT / Hard Science
Keep up.
Subscribe to our daily newsletter to keep in touch with the subjects shaping our future.
+Social+Newsletter
TopicsAbout UsContact Us
Copyright ©, Camden Media Inc All Rights Reserved. See our User Agreement, Privacy Policy and Data Use Policy. The material on this site may not be reproduced, distributed, transmitted, cached or otherwise used, except with prior written permission of Futurism. Articles may contain affiliate links which enable us to share in the revenue of any purchases made.
Fonts by Typekit and Monotype.