Scientists are starting to suspect that an ancient supernova irradiated our entire planet — killing much of its life. 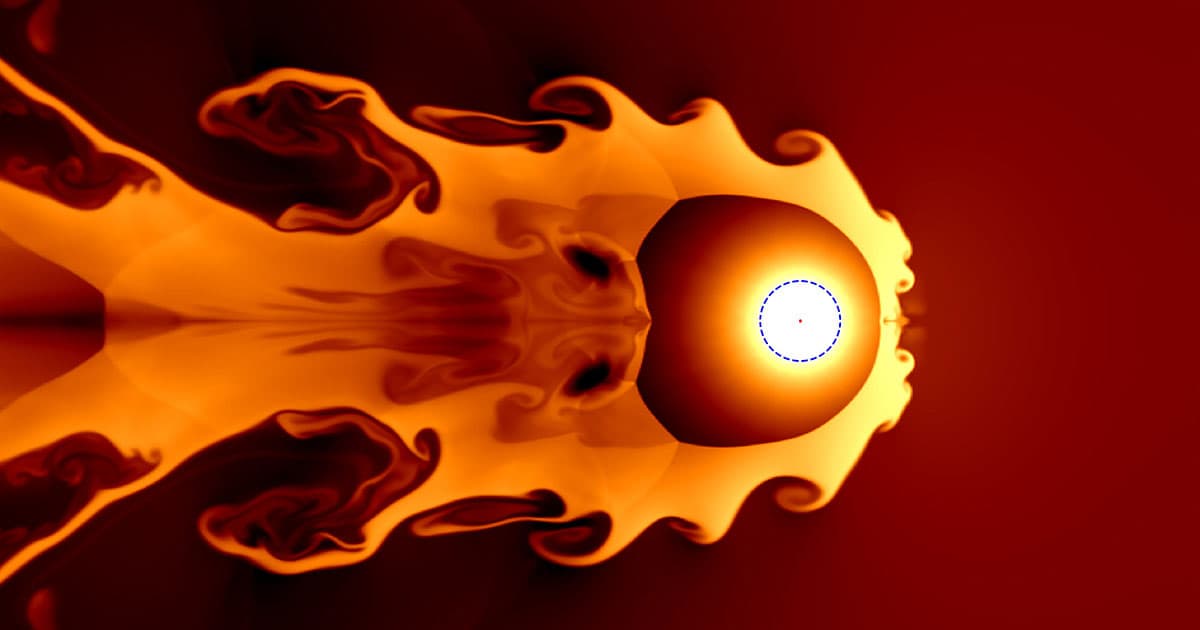 Image by Jesse Miller/University of Illinois

According to researchers at the University of Illinois, a supernova 65 light-years from Earth likely caused a mass extinction event during the Late Devonian period, 359 million years ago.

The researchers found radioactive isotopes in rocks that may be able to confirm such an event, as detailed in a new paper published in the journal Proceedings of the National Academy of Sciences.

During the Late Devonian period, when most life was found in the oceans, one of the worst mass extinctions in Earth's history gravely damaged its ecosystem. Yet it's never been clear what caused it.

To explain the event, the team looked at rocks that contain ancient plant spores. These spores appeared to have been severely sunburnt by ultraviolet light, likely the consequence of a long-term lack of ozone in the atmosphere.

"Earth-based catastrophes such as large-scale volcanism and global warming can destroy the ozone layer, too, but evidence for those is inconclusive for the time interval in question," astronomy and physics professor Brian Fields, lead author, said in a statement. "Instead, we propose that one or more supernova explosions, about 65 light-years away from Earth, could have been responsible for the protracted loss of ozone."

It would have been quite the event, lighting up the skies.

"To put this into perspective, one of the closest supernova threats today is from the star Betelgeuse, which is over 600 light-years away and well outside of the kill distance of 25 light-years," graduate student and study co-author Adrienne Ertel added.

The team also looked at other ozone depletion causes, including meteorite impacts, and gamma-ray bursts, but those wouldn't have caused a depletion in the longer term.

They suggest that the violent supernova flooded our planet with dangerous UV, X-, and gamma rays, irradiating the ozone layer with effects that would have lasted for up to 100,000 years, according to the researchers.

To confirm their suspicions, the team is now looking for the "smoking gun" — two specific radioactive isotopes of plutonium, originating from the Late Devonian period, that only could have come to Earth from cosmic explosions.

"The overarching message of our study is that life on Earth does not exist in isolation," Fields explains. "We are citizens of a larger cosmos, and the cosmos intervenes in our lives — often imperceptibly, but sometimes ferociously."

READ MORE: An Exploding Star 65 Light-Years From Earth May Have Triggered a Mass Extinction [Science Alert]

More on supernovas: Scientists Discover That Bones Are Made Out of Stars

Read This Next
Strange Stars
Astronomers Puzzled by Extremely Peculiar Object in Deep Space
zombie star
Scientists Puzzled by Star That Exploded in Supernova But Somehow Survived
Betelgeuse Betelgeuse Betelgeuse
Astronomers: This Star Isn't As Giant As We Thought, Just Closer
Fall Out Boy
Scientists: Earth Moving Through Radioactive Debris of Exploded Stars
Skeleton Wars
Your Bones Are Made Out of Exploded Stars, Scientists Say
More on Hard Science
Warped Tour
Feb 2 on futurism
Professor Believes Door to Warp Drive May Lie With Ethylene Glycol
Sky Bursts
Feb 2 on the byte
Astronomers Intrigued by 25 Mysterious Repeating Radio Signals From Deep Space
Tractor Beam
Jan 26 on the byte
Scientists Build Working Tractor Beam, Although It's Comically Tiny
READ MORE STORIES ABOUT / Hard Science
Keep up.
Subscribe to our daily newsletter to keep in touch with the subjects shaping our future.
+Social+Newsletter
TopicsAbout UsContact Us
Copyright ©, Camden Media Inc All Rights Reserved. See our User Agreement, Privacy Policy and Data Use Policy. The material on this site may not be reproduced, distributed, transmitted, cached or otherwise used, except with prior written permission of Futurism. Articles may contain affiliate links which enable us to share in the revenue of any purchases made.
Fonts by Typekit and Monotype.