The private space company wants to "enable a sustained human presence on the Moon." 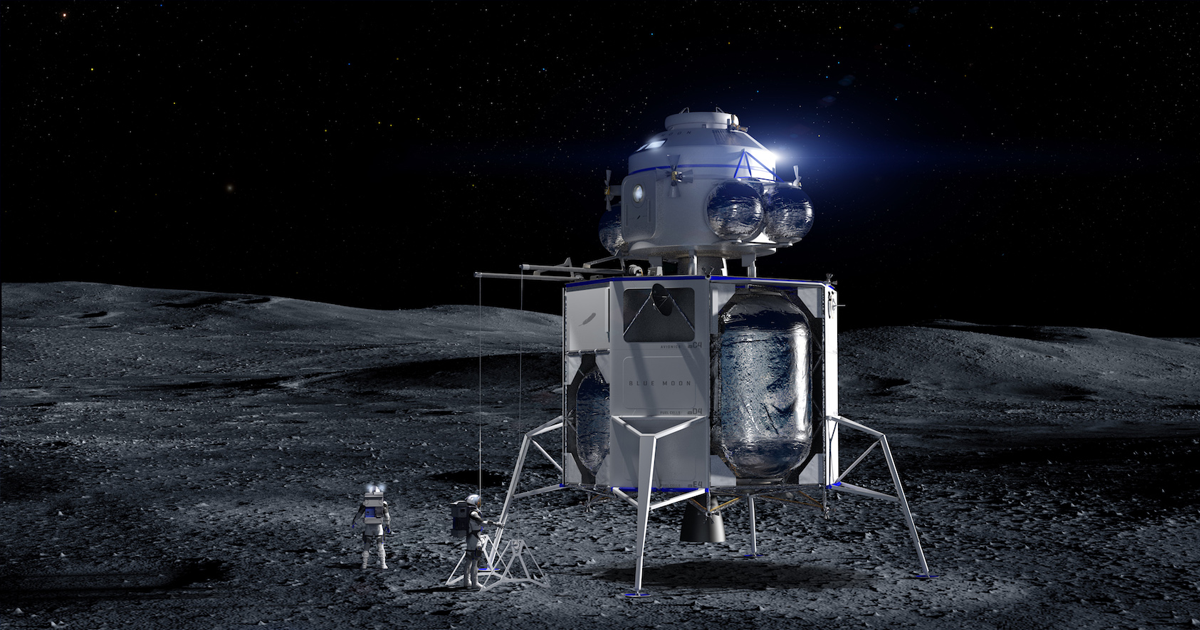 Alexa, Take Me to the Moon

Bezos showed off a brand new design of its "Blue Moon" lander, which is designed to carry 6.5 tons to the surface of the Moon. According to Bezos, the Blue Origin team has been working on the design for three years.

The solution, according to Bezos: look elsewhere for energy sources in the solar system.

The lunar lander will fit into the fairing of Blue Origin's New Glenn rocket and will feature a brand new BE-7 engine with 10,000 pounds of thrust. The new rocket will fire test for the first time as soon as this summer.

Bezos also confirmed that a modified version of the Blue Moon lander could be powerful enough to carry a pressurized ascent vehicle for astronauts to the lunar surface.

A new space on Blue Origin's website describes the lander as being capable of "precise and soft landings" to enable "a sustained human presence on the Moon."

Bezos also talked about his futuristic visions of humanity living in giant space colonies modeled after physicist Gerard O’Neill's designs for massive cylinders that could house human settlers by spinning to provide gravity.

But launching into space is not only super expensive but very difficult. The news comes just a day after Congress grilled NASA officials over how it failed to come up with plans to get to the Moon by 2024.

Bezos confirms Blue Origin will fly people in space this year on New Shepard (but no new announcements so far about those plans.)

Up until the announcement, the only clue as to what the event was about was a cryptic tweet with a picture of British explorer Ernest Shackleton's ship called the Endurance that he explored the Antarctic with.

A site near the south pole of the Moon was named after Shackleton — a crater with rims that are exposed to almost continual sunlight.

The world's richest person wants to go to the Moon, and that's pretty cool.

Editors note: this story has been updated with additional details.

Read This Next
The Moonian
Senior NASA Official Fears Getting "Stuck" on the Moon
Moon Patrol
US Military Announces Plans for Satellite Orbiting the Moon
From Our Partners
This NASA Apollo 15 Commemorative Watch Is Historic In Its Own Right
From Our Partners
LifeShip Puts The DNA Of Somebody You Love On The Moon
Rocket Engine Drama
There's Reportedly Massive Drama Inside Jeff Bezos' Wannabe Space Company
More on Sci-Fi Visions
What is Happening
Yesterday on the byte
Elon Musk Sets His Twitter Account to Private
From the Dept. of...
Monday on futurism
The Best Humidifiers of 2023
Human v. Giraffe
Jan 24 on the byte
Chaotic Italian Fashion Line Baffles Facial Recognition Software
READ MORE STORIES ABOUT / Sci-Fi Visions
Keep up.
Subscribe to our daily newsletter to keep in touch with the subjects shaping our future.
+Social+Newsletter
TopicsAbout UsContact Us
Copyright ©, Camden Media Inc All Rights Reserved. See our User Agreement, Privacy Policy and Data Use Policy. The material on this site may not be reproduced, distributed, transmitted, cached or otherwise used, except with prior written permission of Futurism. Articles may contain affiliate links which enable us to share in the revenue of any purchases made.
Fonts by Typekit and Monotype.