The Cyborgs Are Here: Researchers Put Living Cells In A Robotic Finger

The tiny bot blurs the line between the living and nonliving. 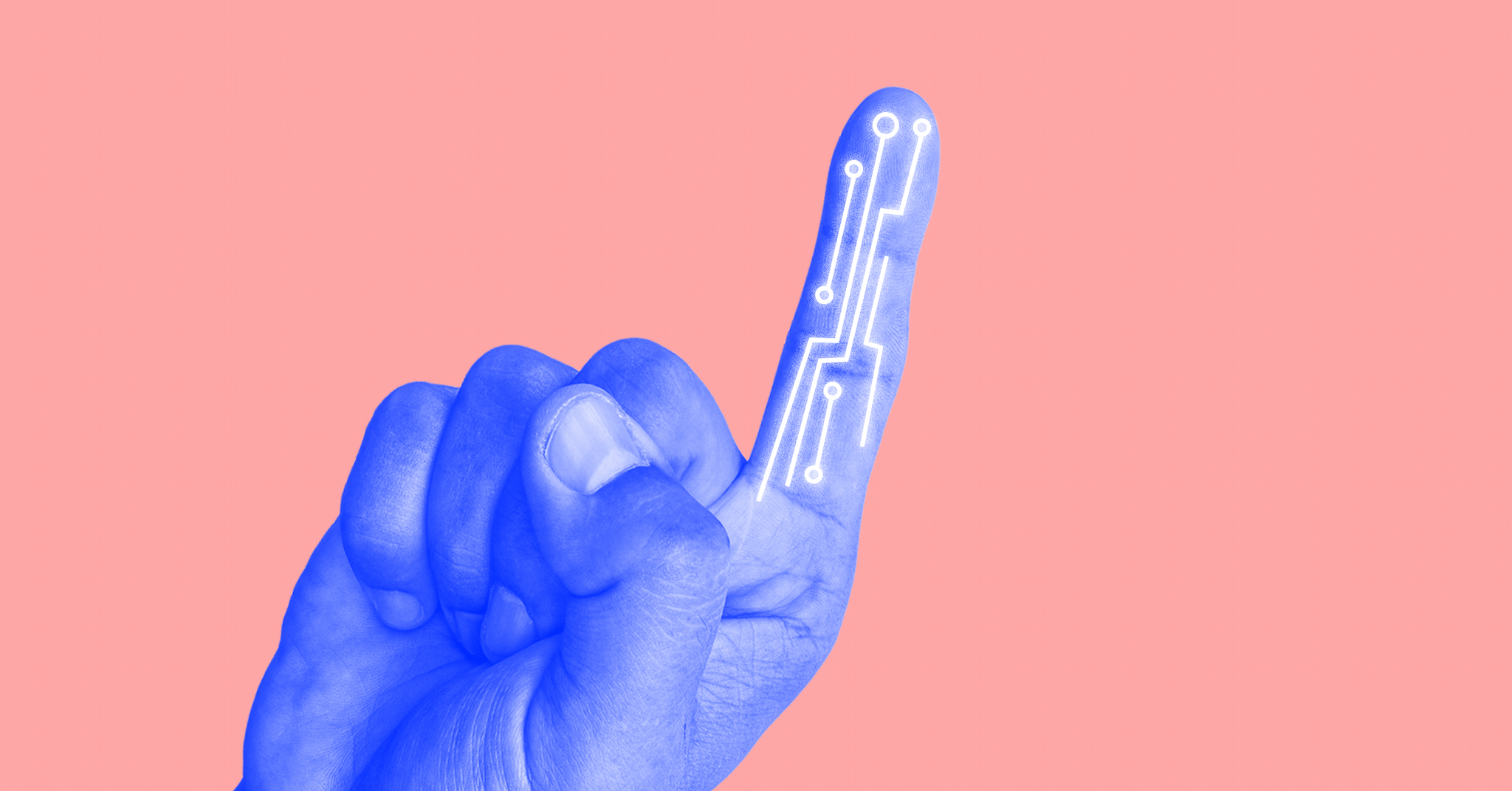 The line between humans and machines is blurring.

Researchers from the University of Tokyo Institute of Industrial Science have now created a biohybrid robot — a robotic device that incorporates living tissue — that remained functional for more than a week. They published their study Wednesday in the journal Science Robotics.

The first step to create a biohybrid robot: to construct the robot skeleton. The researchers  created theirs using 3D-printed resin. They gave it a joint and added anchors where they could attach living tissue. Electrodes they could use to stimulate the living muscle, causing it to contract, were the final touch.

Building the living muscle was the next step. For that, the team used myoblasts, a type of stem cell that eventually matures into different types of muscle cells. They incorporated these cells into hydrogel sheets, poked holes in the sheets to attach them to the skeleton’s anchors, and added some striped structures that would encourage the muscle fibers to grow between the anchors.

“Once we had built the muscles, we successfully used them as antagonistic pairs in the robot, with one contracting and the other expanding, just like in the body,” study corresponding author Shoji Takeuchi said in a news release. “The fact that they were exerting opposing forces on each other stopped them shrinking and deteriorating, like in previous studies.”

The bot’s signature (and only) move is bending its “fingertip” up and down. It may be awfully reminiscent of the creepy REDRUM finger motion that kid makes in “The Shining,” but it’s enough for the bot to pick up a tiny ring and place it on a peg. Working in harmony, two of the robots can lift a small square tab.

Admittedly, engineering a “biohybrid” finger doesn’t seem like the most efficient way to accomplish this task. But according to the researchers, robots like these could serve other, more practical uses in the future.

First, we could create more complex robots, and then study those to glean new insights into how the human body works and how we might treat medical issues. “If we can combine more of these muscles into a single device, we should be able to reproduce the complex muscular interplay that allow hands, arms, and other parts of the body to function,” said lead author Yuya Morimoto in the press release.

Second, we could start using these robots in the pharmaceutical industry. Researchers could test drugs or conduct other experiments on the muscles of biohybrid robots, which could eliminate the need for animal test subjects. This would be similar to the organ-on-a-chip technology, which is also in development.

While the biohybrid robot finger might have limited uses for now, the future of medicine may end up in its (sort of) hands.

Read This Next
Diner Drama
People Furious at Robot Serving Pancakes at Denny’s
Robot Violence
YouTube Accidentally Removed Robot Battle Videos for “Animal Cruelty”
Buzz Off
Tiny Spies: This Insect-Like Flying Robot is Smaller Than a Penny
Automating Gym Class
Toyota’s Basketball Robot Can Nail Three-Pointers
Guardian Exoskeleton
The U.S. Military is Buying a Brutal-Looking Powered Exoskeleton
More on Robots & Machines
FROM THE DEPT. OF...
3:00 PM on futurism
Get Deals on Yeti, Solo, Cuisinart, Samsung, JBL, and Apple Products During These Memorial Day Sales
FROM THE DEPT. OF...
May 21 on futurism
Best Surround-Sound Systems in 2022
FROM THE DEPT. OF...
May 21 on futurism
Best Motorcycle Speakers for 2022
READ MORE STORIES ABOUT / Robots & Machines
Keep up.
Subscribe to our daily newsletter to keep in touch with the subjects shaping our future.
+Social+Newsletter
TopicsAbout UsContact Us
Copyright ©, Camden Media Inc All Rights Reserved. See our User Agreement, Privacy Policy and Data Use Policy. The material on this site may not be reproduced, distributed, transmitted, cached or otherwise used, except with prior written permission of Futurism. Fonts by Typekit and Monotype.