I'll have what he's having. 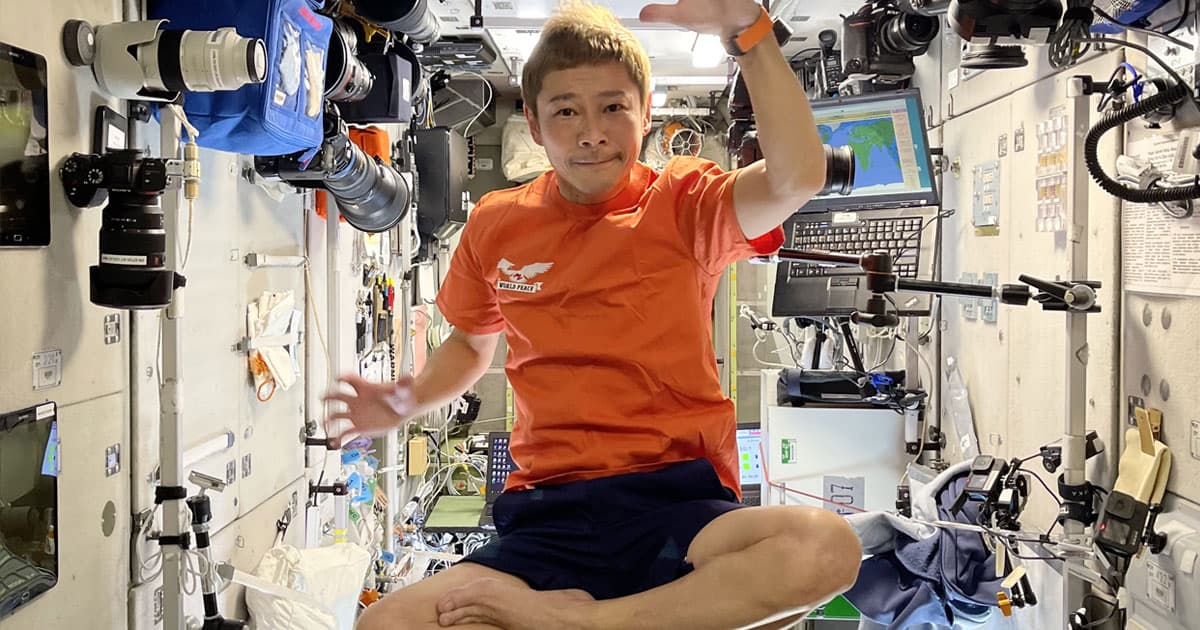 A Japanese billionaire who spent tens of millions of dollars to take a leisurely trip to the International Space Station doesn't care that his vacation among the cosmos is only accessible due to his obscene wealth.

In an interview with the Associated Press conducted from his $80 million vacation aboard the ISS, fashion tycoon Yusaku Maezawa mused that "those who criticize are perhaps those who have never been to space." No kidding, sir!

"Yes, it is still rather expensive, but it is not only about money," he admitted to the AP. "It takes time for your body to adjust in this environment and the training for emergencies takes at least a few months. So, honestly speaking, it is only accessible for those who have time and are physically fit and those who can afford it."

We poor suckers on Earth may not have to wait forever, though: Maezawa said that "we don’t know if that is still going to be the case in 10 years, 20 years’ time."

Worth just under $2 billion, Maezawa and his very lucky assistant Yozo Hirano made history last week by becoming the first space tourists to enter the ISS since 2009. Their 12-day stay has followed the billionaire's headline-grabbing quest to go to space led to a canceled reality show and a pact with SpaceX to send eight other lucky folks on a trip around the Moon on their dime.

Earlier in his ISS voyage, the billionaire claimed he's going to give away some of his vast wealth while he's in space, but it remains unclear why, how much, to whom, or when such charity will occur — and the question of his proclamation did not come up in AP's latest report.

While he's clearly thrilled to be among the 0.00000000001 percent of people who can afford to send themselves and their friends to space, it hasn't been all fun and games so far, as Maezawa told the AP that he's had difficulty sleeping and experienced motion sickness since entering the ISS.

But rest assured, the billionaire is "getting over the motion sickness so I can enjoy the remaining days."

"I am returning on the 20th and starting to miss Japan," he said. "Once I return, I want to have sushi!”

Wouldn't we all like to have what he's having!

More on Maezawa: Billionaire Playboy Shares Video of Himself Frolicking in Outer Space

Read This Next
Designer Elderly
Experts Worried Elderly Billionaires Will Become Immortal, Compounding Wealth Forever
Makeover Scene
Space Tourist Says He's Thinking About Flying SpaceX Craft Up to Fix Hubble
Don't let the door hit you
Elon Musk Lobs Casual Space Station Burn at Moscow
Buh Bye
Russia Says It's Definitely Quitting the ISS But Doesn't Say When Exactly
Don't Let the Door Hit You
Russian Space Chief Leaving Post, May Be Headed to War Zone
More on Off World
Killernova
Yesterday on the byte
Scientists Find "One in Ten Billion" Star System Primed to Explode in Titanic Kilonova
Lonely Planet
Feb 5 on futurism
Scientists Find Nearby Planet the Same Size of Earth, Plan to Search It for Life
Take Cover
Feb 4 on the byte
Space Startup Blows Up Another Giant Inflatable Space Station Module
READ MORE STORIES ABOUT / Off World
Keep up.
Subscribe to our daily newsletter to keep in touch with the subjects shaping our future.
+Social+Newsletter
TopicsAbout UsContact Us
Copyright ©, Camden Media Inc All Rights Reserved. See our User Agreement, Privacy Policy and Data Use Policy. The material on this site may not be reproduced, distributed, transmitted, cached or otherwise used, except with prior written permission of Futurism. Articles may contain affiliate links which enable us to share in the revenue of any purchases made.
Fonts by Typekit and Monotype.