"Mr. Zuckerberg has made clear that his aspiration for the VR space is control of the entire ecosystem." 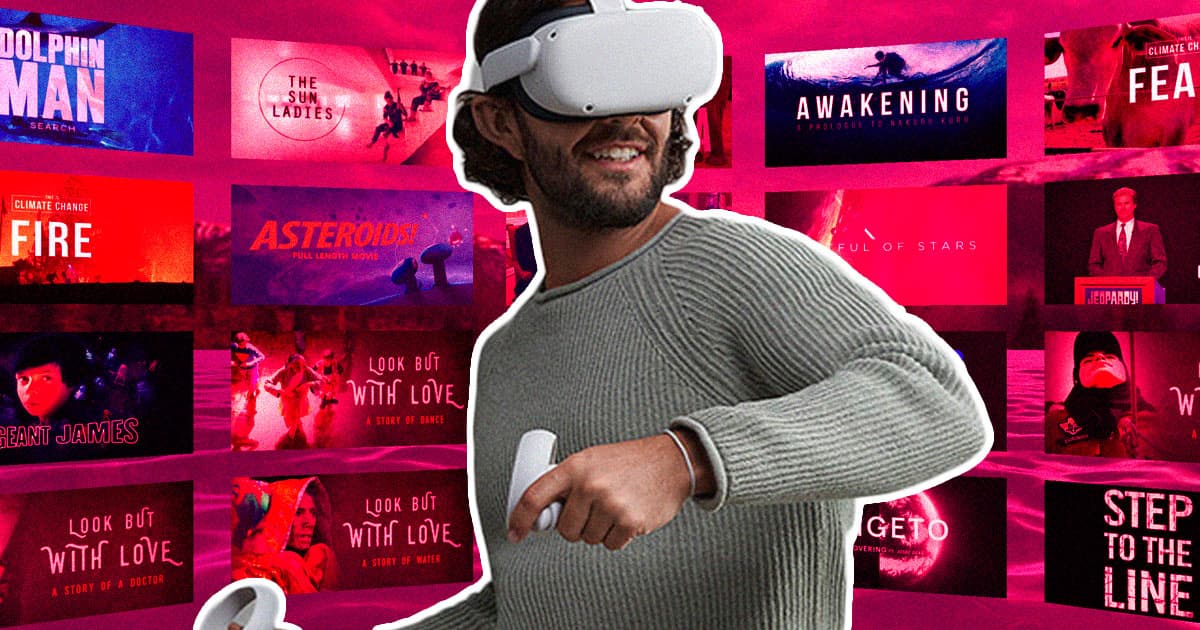 The Federal Trade Commission has launched an antitrust suit against alleged robot Mark Zuckerberg's Meta-formerly-known-as-Facebook, blocking — at least for now — the company's purchase of the VR startup Within, The New York Times reports.

This case could be a major bump in the road for Zuck's Metaverse vision, especially coming in tandem with the company's latest revenue report. On Wednesday afternoon, just hours after the FTC broke the news, Facebook/Meta clocked its first revenue decline in the company's public history, as well as a 36 percent decrease in profits.

Within offers a number of VR experiences, most notably its flagship product called Supernatural, an industry-leading fitness app. Zuck et al made moves to acquire the organization back in October 2o21 — the same month that it announced its so-called Metaverse, an immersive digital world complete with endless virtual fitness opportunities.

Now, however, the FTC is attempting to prevent this from happening, specifically alleging that the billionaire intends to monopolize the VR fitness space — and beyond.

"Meta seeks to exploit the network-effects dynamic in VR. Indeed, Mr. Zuckerberg has made clear that his aspiration for the VR space is control of the entire ecosystem," reads the lawsuit, which argues that Facebook could have simply attempted to compete with the tech, but chose to buy and assume greater market control instead. "The proposed acquisition of Within would be one more step along that path toward dominance."

As the NYT reports, the suit is unusual, but experts believe that the FTC might be attempting to set monopoly law precedents for the Metaverse Age.

"It's a riskier case, but one they think is worth bringing because if they succeed it will help the frontier of enforcement outward," William E. Kovacic, former FTC Chair, told the NYT. "I think this is the first of its kind."

The FTC's Bureau of Competition Deputy Director, John Newman, even told the NYT that Meta is trying to "buy its way to the top" rather than compete on merits, on grounds that the Silicon Valley bigwig had already owned a popular VR fitness app at the time of the attempted Within acquisition.

This is first antitrust case filed by incoming FTC Chair Lina Khan, a Biden appointee who made big waves back in 2017 when, as a 29-year-old law student, she published a lauded reframing of monopoly law focused specifically on Jeff Bezos' Amazon.

As one might imagine, the metamates are less than thrilled.

"The FTC's case is based on ideology and speculation, not evidence," Meta wrote in an extremely salty statement. "The FTC rests its arguments on a number of flawed premises and unsupported assumptions that do not stand up to scrutiny."

The statement angrily continued: "At the end of the day, attempting to bar Meta from making acquisitions at all benefits no one — especially if the goal is to encourage innovation and competition."

Rough waters ahead for the archery-loving billionaire, perhaps? Alas, katana in hand, we're sure he's ready to duel his way through legal and financial woes. No one smokes his meat but him!

Read This Next
Scammers Scam On
The Fyre Fest Guy Is Off House Arrest and of Course His New Scheme Involves the Metaverse and Crypto
Confrontation is Hard
Former Facebook Exec Says Zuckerberg Has Surrounded Himself With Sycophants
Zesus
Interesting Theory: Mark Zuckerberg Is Trying to Become God and Build Heaven
Make Mark Happy
Facebook Employees Seem Completely Confused by the Metaverse
Midlife Crisis
Rumors Swirl That Mark Zuckerberg Is Fighting at a UFC Show
More on Future Society
Ctrl C Ctrl V
5:43 PM on the byte
Inspired by Twitter's Struggles, Facebook Considers Making an App Where You Can Post Text. Wait a Second...
Sleeping Tweeps
5:00 PM on the byte
Elon Musk Installs Washing Machine at Twitter HQ So Overworked Employees Can Wash Their Filthy Rags
Phoney Business
Yesterday on the byte
Amazon Says It'll Pay You $2 Per Month to Spy on Your Phone's Internet Traffic
READ MORE STORIES ABOUT / Future Society
Keep up.
Subscribe to our daily newsletter to keep in touch with the subjects shaping our future.
+Social+Newsletter
TopicsAbout UsContact Us
Copyright ©, Camden Media Inc All Rights Reserved. See our User Agreement, Privacy Policy and Data Use Policy. The material on this site may not be reproduced, distributed, transmitted, cached or otherwise used, except with prior written permission of Futurism. Articles may contain affiliate links which enable us to share in the revenue of any purchases made.
Fonts by Typekit and Monotype.