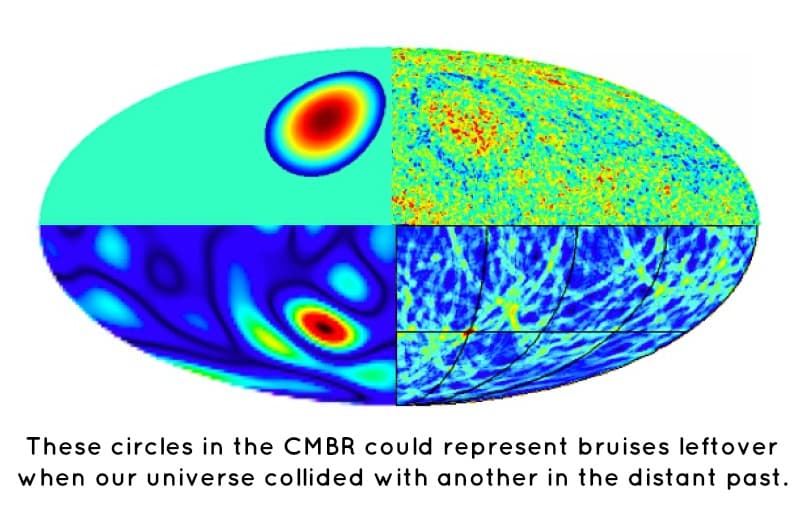 Over the course of the last few years, the multiverse hypothesis has transitioned from appearing highly illogical to being a somewhat accepted theory, at least amongst certain scientists. This general distrust is the result of several motivating factors, with the top primary reason being that such a theory is almost impossible to test through conventional means. Science generally deals in facts. Each fact is tested thoroughly. If a certain hypothesis doesn’t hold up after intense scrutiny, it may be discarded in favor of another one. However, how do we deal with hypothetical hypotheses that have very few verifiable variables? (what a mouthful!) One such idea concerns our universe belonging to a larger multiverse. As it is, we can’t even see what’s beyond the horizon of our observable universe, so how are we to see beyond our universe into a separate one? See. This is a problem. We can’t. So lets say, hypothetically, that our universe IS one of many universes, each dealing in an entirely different set of physical laws that govern it. What exactly would happen to both - and humans in particular - if one or more actually collided?

For the sake of discussion, let’s imagine the multiverse as a series of bubbles, with our universe being just one of perhaps an infinite number of them. Most of the time that they collide, the bubbles burst. But sometimes, two (maybe more) can successfully combine before collapsing in on each other and forming a new one, this process mimics the hypothetical process outlined by a universal collision (or merger) in this particular piece. Some proponents of other theories apart from the big bang think a variation of this could be a viable formation theory for our universe, where these sorts of things happen quite frequently in an infinitely large multiverse.

According to Anthony Aguirre, a physicist from the University of California at Santa Cruz, ignoring the ‘how’ and ‘why’ of a universal collision, as soon as a ‘sister’ universe came crashing into ours, “We’d see a big mirror in the sky rushing toward us because light would be reflected by the wall,” says Aguirre. “After that we wouldn’t see anything—because we’d all be dead.,” he added. If we could see the change implemented in ultra-slow motion, that is (we probably wouldn’t see anything and it would all be rather quick). On the other side of that wall, lies a new universe apart from our own. With it, comes the ultimate destruction the universe as we know it, but the birth of another one.

However; what if the laws of physics in the other universe allow for faster than light travel or, for that matter, instantaneous travel? Well, that is not nearly as interesting to contemplate because we may be dead long before we even deduced what was going on.

There’s another scenario that is no more or less plausible than the one we just mentioned. Perhaps our universe will only adopt certain attributes of the other universe, and vice versa. That could leave us open to a whole set of weird and wacky governing laws of physics, which may sound desirable to those of you that wish to flap your wings and fly.

On the note of gravity disappearing, so too could the rotation of our planet on its axis halt. For that matter, Newton’s laws of motion could be nil, reduced to a blithering mess of planets uncharacteristically escaping the gravity of their planet star, sending the planets zooming into space at exceptional speeds. Thermodynamics - as well as general and special relativity - may be redefined or done away with all together too. The stars could stop shining, leaving us in perpetual night time, with no means for nourishment or even breathable air, as plants no longer are capable of transforming starlight into energy through photosynthesis. All of these changes are pretty disastrous, not only for the universe itself, but for us too, as life is a fickle bitch and prone to unforeseen complications.

One more interesting point to consider, what if our sister universe didn’t have time as the fourth dimension, or it didn’t exist at all? First, let me refer you to an article we wrote on time disappearing from the universe entirely (and another about what life would be like for us if time were 2-D), which hypothesizes that dark energy isn’t driving the universe’s expansion at all, but instead time is gradually slowing down. Such a perceived change would hardly be perceptible on a micro-scale, but would be quite noticeable over cosmic distances. So obviously, this has some interesting implications for our current universe if it were true, as it implies that not only is time no a dimension, but it may cease to exist at all.

It also adds another layer to the universal collision quantum quandary we’re discussing here. Without time, our whole reality falls apart as time begins to lose its many attributes one by one: the duration of events, the arrow of time, and its role in ordering events causally…not to mention the role it would play in entropy throughout the universe, which typically increases over time. Eventually, everything would come to a complete standstill with nothing to move anything forward including the journey of photons, which would effectively make all of us blind. So if you have dinner in the oven, forget about it. Plans next weekend? No big deal. On the upside; that alarm clock won’t be going off anytime soon.

While a collision between two universes may be unlikely to happen over the course of the lifespan of one single single species, this is still interesting to ponder. Furthermore, there is some evidence to suggest that one or more of these collision have taken place in the very distant past. Our universe may even still bare  some of the bruises from it even now!