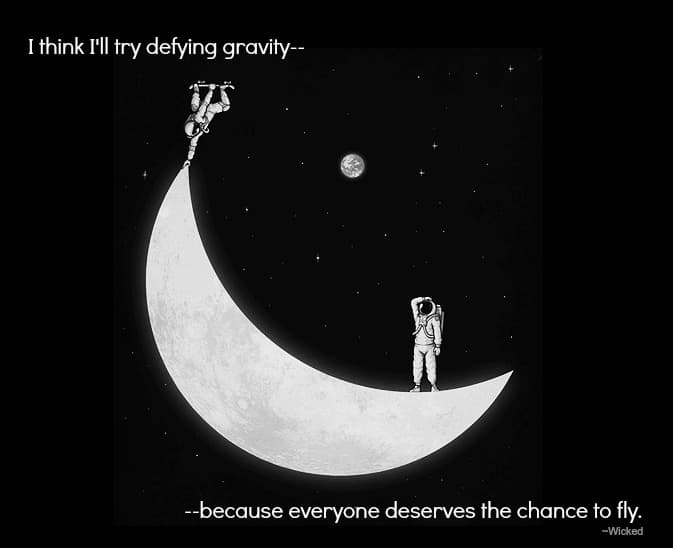 When I was young, I dreamed about traveling to space and enjoying the wonders of weightlessness. I wanted to eat bubbles of water and bounce off the ceiling. I planned to take a nap on the wall and then play a 360° game of leapfrog. And the back-flips!! Oh, how I dreamed of doing innumerable, flawless back-flips.

You see, I have never been particularly aerobatic (falling generally comes much easier to me), but in space, well, it seemed that anything is possible there. And if I’m being honest, I still dream about floating around among the stars. Sometimes, gravity seems like such a drag. But what if it didn’t exist? What if we all woke up one day and discovered that, suddenly, there was no more gravity?

Before we embark on this little thought experiment, first, a definition:

Let's say you are walking down the road beside a friend. Even though you may not be aware of it, there will be an incredibly slight gravitational attraction between the atoms in your body and the atoms in your friend’s. The same is obviously true for objects that are floating about in space. Really large objects that have a lot of mass (like planets) exist because matter is gravitationally attracted to other matter. In essence, gravity makes matter clump together; it forms the planets and stars and black holes…and everything else that makes life so terribly interesting.

At the most basic level: gravity is related to mass, which is related to matter. The more matter, the higher the mass; the higher the mass, the higher the gravitational pull. Gravity on Earth never changes because the mass of the Earth never changes. Essentially, huge chunks of our planet aren’t being ripped out from under our feet (which is, I think, generally a good thing). A change in mass great enough to result in a change in gravity isn't going to happen anytime soon (thankfully, a large portion of our planet isn’t going to up and disappear).

Ignoring the fact that our bodies are held together by gravity...

The most important things held to the Earth by gravity are the atmosphere and our water. Without gravity, the air in the atmosphere isn’t compelled to stick around, so it would immediately begin drifting off into space. Earth’s oceans, lakes, and rivers would also depart. I imagine that it would be horrifying (and probably a little amusing) to see fish and whales floating in bubbles of water high in the sky. But of course, we’d be drifting off the planet along with them. Fortunately, we wouldn’t have too long to be horrified because, without air and water, none of us would last very long.   But what if there was never any gravity? What if electromagnetism, the strong interaction, and the weak interaction were all exactly as we know them, but the fourth force, the one that pulled together a bunch of rocks to form Earth and keeps us all from drifting off into the cosmos, what if it never existed? Then, for all intents and purposes, there would be no universe. Or rather, the universe would be completely flat and featureless. There would be no stars or planets, no black holes to boggle the mind. No you, and definitely no me.

So, as long as we have gravity we can’t fly. But we can exist…and that’s something