Did Our Universe Collide With Another When it was 380,000 Years Old? 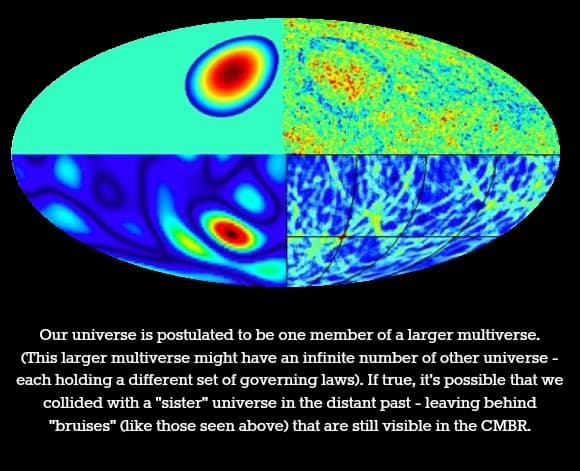 The multiverse is a hypothesis that has slowly been gaining credence in the world of cosmology. To simplify the idea, the multiverse is basically the idea that there are other universes and we all exist in the same void ‘space’ region. Similar to how we see multiple planets, multiple solar systems, and multiple galaxies, some scientists believe multiple universes also exist. Only problem is proving the existence of something that has a unique set of natural laws existing outside of our own universe inside a region of voidness with little to no physical laws is… difficult. There are a few ways of collecting evidence for the existence of other universes, and even fewer with current technology. That’s where the cosmic microwave background radiation (CMBR) comes in.

For a while now, scientists have had a problem with this brilliant image. The CMBR is radiation left over from the big bang. About 380,000 years after the big bang, the universe expanded more than 10^78 times it’s original size (that’s a 1 followed by 78 zeros – in other words, that’s a lot). According to our models of inflation, the universe should have expanded evenly in all directions, but Planck data, among other CMBR surveys, show an asymmetric universe.

If you look at the image, you’ll see a line drawn across it. In the southern hemisphere of the universe, you’ll notice the hottest (red) and coldest (blue) spots are brighter or more extreme than those on the northern hemisphere. This is a problem because when scientists try to study the inflation period of the universe using computer simulations, the universe disagrees with our results. Obviously, we’re missing something.

Several theories have been put forward in an attempt to explain this asymmetry, one of which is the idea that our universe collided with another when it ballooned out to an incredible size at a fantastic speed. In the multiverse hypothesis, our universe could have popped into existence near another universe. When it expanded, it ran into the neighboring universe; the resulting collision would have left a mark (like a bruise) on our universe.

Our universe could have also run into itself during inflation – kind of like tripping over your own feet when you get out of bed. If there are extra dimensions of spacetime, such as those proposed in string theory, our universe could be wrapped around these dimensions and expanding in all sorts of interesting directions. Naturally, this could have resulted in the early universe smacking itself.

Then again, it’s possible the laws of physics aren’t uniform across the universe, and the southern portion of the universe is bound by a different set of physical laws than the northern side. It could have also been the result of the random fluctuations in spacetime, which would drive everyone nuts – you know how scientists like “random” things. Insert chills here.

There are so many models for inflation running around, it could make your head spin. Fortunately, the folks operating the Planck telescope are in the process of creating a ‘polarization map’ of the universe. It’ll help scientists falsify several of the inflation modes and narrow the field of likely candidates. This survey is expected to be released sometime in 2014. Oh, and this new map might provide evidence for the existence of gravity waves – just thought I’d throw that out there.

Wonder what would happen if two galaxies collided and merge? Check out our article.