What Created These Ripples in This Circumstellar Disk? 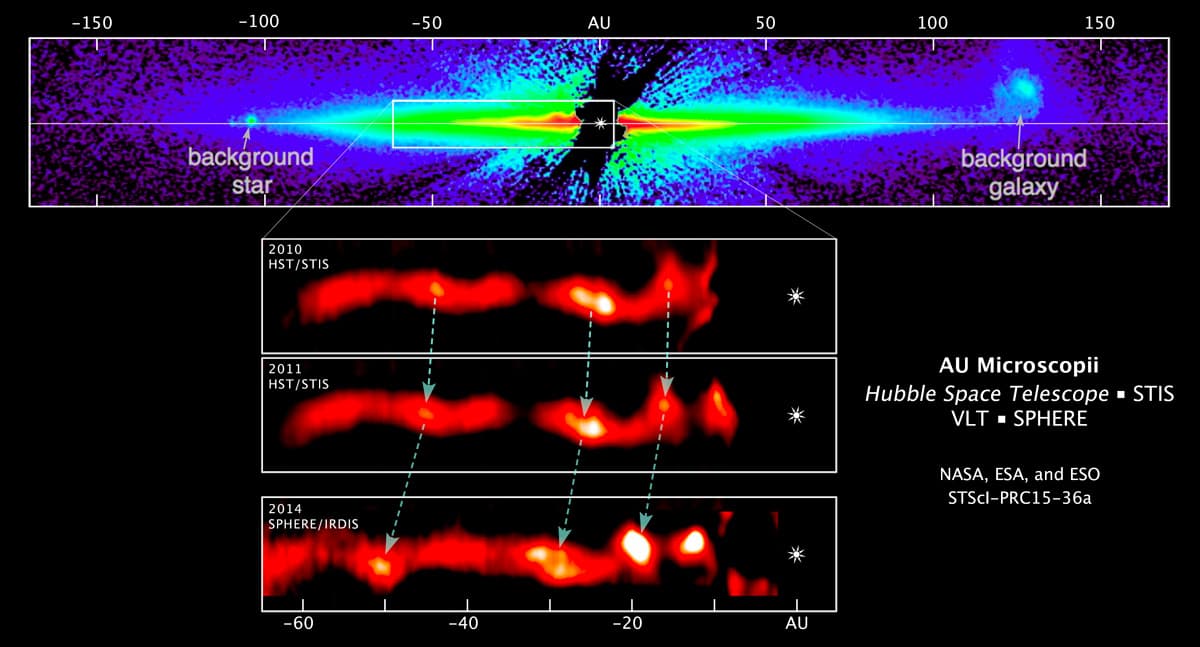 The fast-moving, wave-like structures are unlike anything ever observed, or even predicted in a circumstellar disk, said researchers of a new analysis. This new, unexplained phenomenon may provide valuable clues about how planets form inside these star-surrounding disks.

AU Mic is located 32 light-years away in the southern constellation Microscopium. It is an optimal star to observe because its circumstellar disk is tilted edge-on to our view from Earth. This allow for certain details in the disk to be better seen.

Astronomers have been searching AU Mic's disk for any signs of clumpy or warped features that might offer evidence for planet formation. They discovered a very unusual feature near the star by using ESO's SPHERE (Spectro-Polarimetric High-contrast Exoplanet Research) instrument, mounted on the Very Large Telescope.

"The images from SPHERE show a set of unexplained features in the disk, which have an arc-like, or wave-like structure unlike anything that has ever been observed before," said Anthony Boccaletti of the Paris Observatory, the paper's lead author.

The images reveal a train of wave-like arches, resembling ripples in water. After spotting the features in the SPHERE data the team turned to earlier Hubble images of the disk, taken in 2010 and 2011. These features were not recognized in the initial Hubble observations.

But once astronomers reprocessed the Hubble images they not only identified the features but realized that they had changed over time. The researchers report that these ripples are moving—and they are moving very fast.

"We ended up with enough information to track the movement of these strange features over a four-year period," explained team member Christian Thalmann of the Swiss Federal Institute of Technology in Zurich, Switzerland. "By doing this, we found that the arches are racing away from the star at speeds of up to 10 kilometers per second (22,000 miles per hour)!

Co-investigator Carol Grady of Eureka Scientific in Oakland, California, added, "Because nothing like this has been observed or predicted in theory we can only hypothesize when it comes to what we are seeing and how it came about."

The ripples farther away from the star seem to be moving faster than those closer to it. At least three of the features are moving so fast that they are escaping from the gravitational attraction of the star. Such high speeds rule out the possibility that these features are caused by objects, like planets, gravitationally disturbing material in the disk.

The team has also ruled out a series of phenomena as explanations, including the collision of two massive and rare asteroid-like objects releasing large quantities of dust and spiral waves triggered by instabilities in the system's gravity.

"One explanation for the strange structure links them to the star's flares. AU Mic is a star with high flaring activity—it often lets off huge and sudden bursts of energy from on or near its surface," said co-author Glenn Schneider of Steward Observatory in Phoenix, Arizona.

"One of these flares could perhaps have triggered something on one of the planets—if there are planets—like a violent stripping of material, which could now be propagating through the disk, propelled by the flare's force."

The team plans to continue to observe the AU Mic system to try to understand what is happening. But, for now, these curious features remain an unsolved mystery.

The results will be published Oct. 8 in the British science journal Nature.