Cat Owners: Science Agrees, Your Cat Really IS Ignoring You! 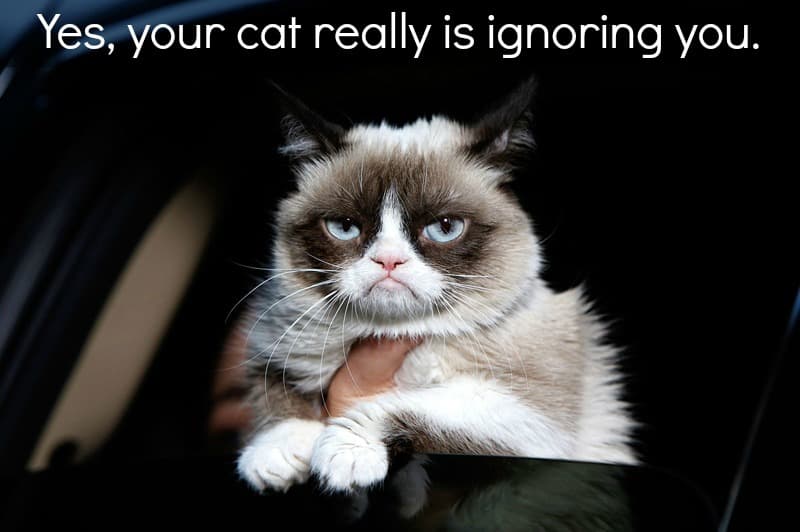 Cat owners everywhere will attest to the simple fact in life that, whereas your cat can understand you, they also choose to completely ignore your commands. Whereas they are completely capable of understanding you, and your requests for them to to get off the counter or to stop scratching the couch, they just don’t care to listen, because they are cats. It’s probably rooted in their evolutionary path to domestication.

The study analysed the body language of twenty housecats (in their own home) and their response to being given commands by strangers and by their owner. By body language, I mean things such as how their ears, head, and tail responds, any type of vocalization, their eyes (specifically, any pupil dilation), and their general body posturing.

When called by strangers (who were out of sight), the cats responded in a “oh, there’s a strange noise over there, I should be a little attentive” kind of way (the same way you respond to strange sounds) - they basically oriented themselves to the sound for a better listen. When called by their owners, they had a greater response, indicating the caw was familiar with the sound of the owner’s voice; but the cat basically went back to sleep ignoring their owner’s call.

Anybody who has owned, or experienced a dog, knows that they obey commands with some amount of accuracy (certainly better than cats do). How did a housepet, who ignores people, get into our lives? They basically domesticated themselves.

About 9,000 years ago, cats first came onto the human scene, specifically a cat called Felis silvestris, the ancestor housecats today call mommy and daddy. The laziness of the modern housecat is legendary, and it’s in their blood. As early humans started agriculture, cats realized that these fields were swarming with rodents and the like. Why go get dinner when dinner comes to you? This is basically how the cat entered our lives and started to “self domesticate.”

Cats did not evolve to obey orders from humans in the same way dogs did. Instead, cats were proactive in our relationship, so not only did cats domesticate themselves, but they also domesticated us in a way. Cats continued to provide a useful service for us (catching rodents), so we had no reason to get rid of them. Somewhere between the agricultural fields and huts of early man, and now, cats moved inside and got more lazy. Amusingly enough, the paper from the Animal Cognition journal that studied these cats, concludes, “the behavioral aspect of cats that cause their owners to become attached to them are still undetermined.”