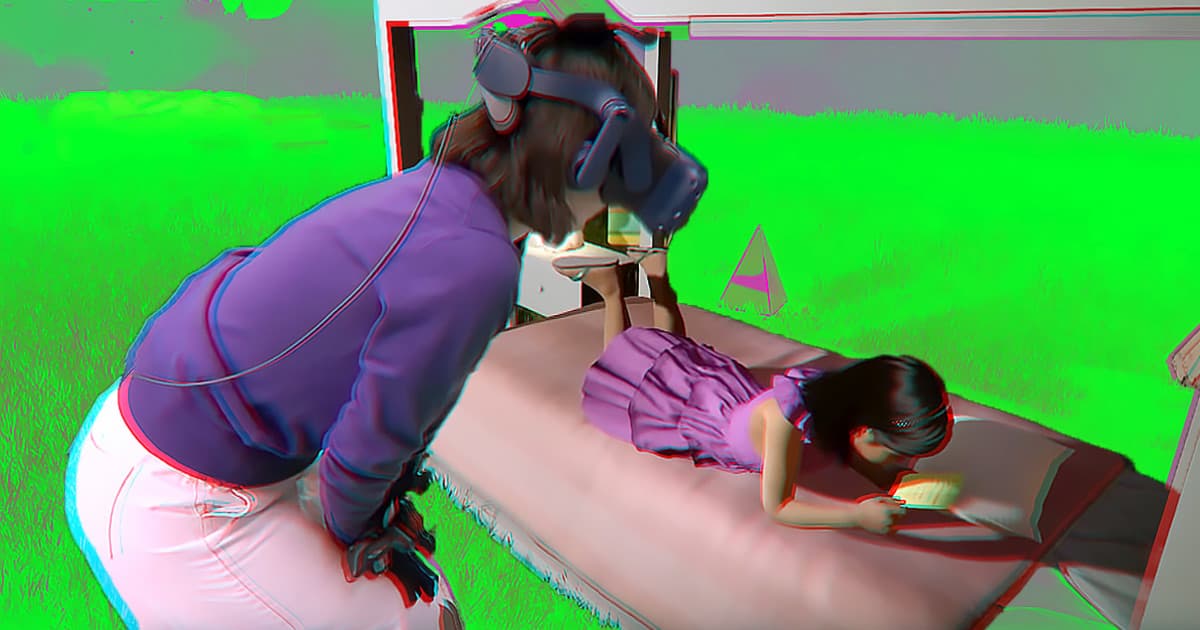 In 2016, Jang Ji-sung's seven-year-old daughter Nayeon died of an incurable disease. Three years later, the South Korean mother was reunited with Nayeon — sort of — in a virtual world created for a televised documentary.

On Thursday, the Munhwa Broadcasting Corporation shared a clip from the special documentary, titled "I Met You," on its YouTube page, with the footage cutting between the "real world" and the virtual one.

The VR reunion is, as you might expect, extremely emotional. Jang appears to begin crying the moment she sees the virtual Nayeon, while the rest of the family — Nayeon's father, brother, and sister — watch the reunion unfold with somber expressions and the occasional tear.

"Maybe it's a real paradise," Jang said of the reunion in VR, according to Aju Business Daily. "I met Nayeon, who called me with a smile, for a very short time, but it's a very happy time. I think I've had the dream I've always wanted."

It may have taken an entire team of experts to produce "I Met You," but how far can we be from a platform that lets anyone upload footage of a deceased love one and then interact with a virtual version of that person? Years? Months?

And will it stop with VR? Or is this just the first step to androids designed to mimic our dead loved ones in both appearance and personality, like in the "Black Mirror" episode Be Right Back?

Several startups are setting the groundwork for that future, compiling data about people both living and dead so they can create "digital avatars" of those people. Other companies are already building robot clones of real people.

The key to a VR reunion being a positive thing — that is, more like a twenty-first century take on flipping through a photo album and less like that "Black Mirror" episode — appears to be in the living person fully accepting their loved one's death.

"Since you know the person is gone, you accept the virtual equivalent for what it is — a comforting vestige," Princeton neuroscientist Michael Graziano told Dell Technologies in December. "There is nothing wrong or unethical about it."

Perhaps regulation is necessary. Rather than letting startups offer the public the chance to interact with virtual versions of their dead loved ones — undoubtedly at a cost — maybe we can make the technology available only to people who've submitted to a screening with a psychologist.

It's hard to say what might work as the opportunity to interact with convincing versions of the deceased in VR is decidedly uncharted territory — but now that we've officially entered that arena, we have a lot of questions we need to answer as soon as possible.

Editor's Note, 2/07/20: This article was updated to correct the name of the broadcaster that aired the documentary.

Read This Next
Scammers Scam On
The Fyre Fest Guy Is Off House Arrest and of Course His New Scheme Involves the Metaverse and Crypto
Virtual Signing
Sign Language in Virtual Reality Actually Looks Kinda Awesome
Body Farm
California Legalizes Composting Human Bodies
Sword Art Online
Guy Who Invented the Word "Metaverse" Building His Own Metaverse
Death and Taxes
Direct-to-Consumer Companies Are Trying to Disrupt the Cremation Industry
More on Future Society
Break Out in Hives
Yesterday on futurism
Twitter Competitor Shuts Down App When It Turns Out Hackers Can Read Users' Private Messages
Be Better
Yesterday on futurism
Elon Musk Reportedly Slashed the Team That Fights Child Sexual Abuse on Twitter
You OK?
Yesterday on the byte
Mark Zuckerberg Tries to Explain Why the Metaverse Is Great, Gets Attack of the Hiccups Instead
READ MORE STORIES ABOUT / Future Society
Keep up.
Subscribe to our daily newsletter to keep in touch with the subjects shaping our future.
+Social+Newsletter
TopicsAbout UsContact Us
Copyright ©, Camden Media Inc All Rights Reserved. See our User Agreement, Privacy Policy and Data Use Policy. The material on this site may not be reproduced, distributed, transmitted, cached or otherwise used, except with prior written permission of Futurism. Articles may contain affiliate links which enable us to share in the revenue of any purchases made.
Fonts by Typekit and Monotype.