Watch a Galaxy Form Over More Than 13 Billion Years

Scientists had to speed the simulation up just a little bit. 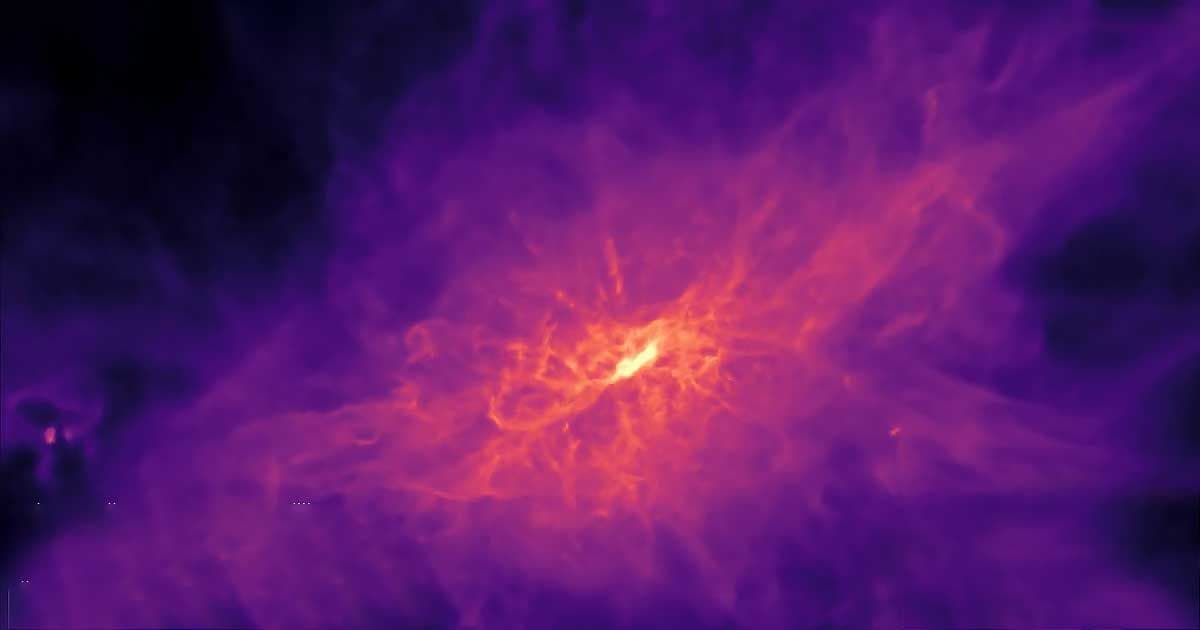 Using a powerful supercomputer, scientists have created a state-of-the-art simulation of galactic formation.

While previous simulations typically had to choose between showing a big-picture view or being highly detailed, the TNG50 simulation is both. Not only does it show how a whole universe may have formed in the 13.8 years since the Big Bang, but it also gives scientists the ability to zoom in and see an individual galaxy form in incredible detail.

Perhaps most exciting of all: the team behind TNG50 shared a clip of one of those simulated galaxies online for your viewing pleasure.

TNG50 was a collaborative undertaking between scientists in Germany and the United States, who published two papers on the simulation in the journal Monthly Notices of the Royal Astronomical Society earlier in November.

It took the Hazel Hen supercomputer in Stuttgart, Germany, more than a year to complete the simulation, which — like similar visualizations — largely works backwards from what scientists already believe about the universe to predict the activity that led to the current state of affairs.

While being able to see a galaxy form over billions of years is cool in and of itself, the simulation did more than just produce a visual for known data — it also provided several new insights, including previously unknown details on the process of disc galaxy formation.

"Numerical experiments of this kind are particularly successful when you get out more than you put in," researcher Dylan Nelson said in a press release. "In our simulation, we see phenomena that had not been programmed explicitly into the simulation code. These phenomena emerge in a natural fashion, from the complex interplay of the basic physical ingredients of our model universe."

The researchers plan to eventually release all of the data from TNG50, giving other scientists the opportunity to look for even more new phenomena in the state-of-the-art simulation.

READ MORE: Watch the evolution of a galaxy, from the Big Bang till today[Digital Trends]

Read This Next
Space Lumps
Scientists Say We May Be Extremely Wrong About the Universe
Really Really Really Old
Astronomers Puzzled By Ancient Milky Way-Like Galaxy 12 Billion Light-Years Away
Crowded Galaxy
New Research: There Could Be 36 Alien Civilizations in Our Galaxy
Wanna Feel Small in the Universe?
Astronomers: Something Is Warping Our Entire Galaxy
Massive Gravity
New Theory Could Solve Universe’s Biggest Paradox
More on Hard Science
Moved to Tears
Jun 30 on the byte
Scientists Say New James Webb Images Are So Powerful That It Was Emotional Just Looking at Them
Good God
Jun 28 on the byte
Huge Cloud of Toxic Yellow Gas Kills 13
zombie star
Jun 28 on futurism
Scientists Puzzled by Star That Exploded in Supernova But Somehow Survived
READ MORE STORIES ABOUT / Hard Science
Keep up.
Subscribe to our daily newsletter to keep in touch with the subjects shaping our future.
+Social+Newsletter
TopicsAbout UsContact Us
Copyright ©, Camden Media Inc All Rights Reserved. See our User Agreement, Privacy Policy and Data Use Policy. The material on this site may not be reproduced, distributed, transmitted, cached or otherwise used, except with prior written permission of Futurism. Fonts by Typekit and Monotype.