An ingenious tabletop instrument might be able to spot dark matter. 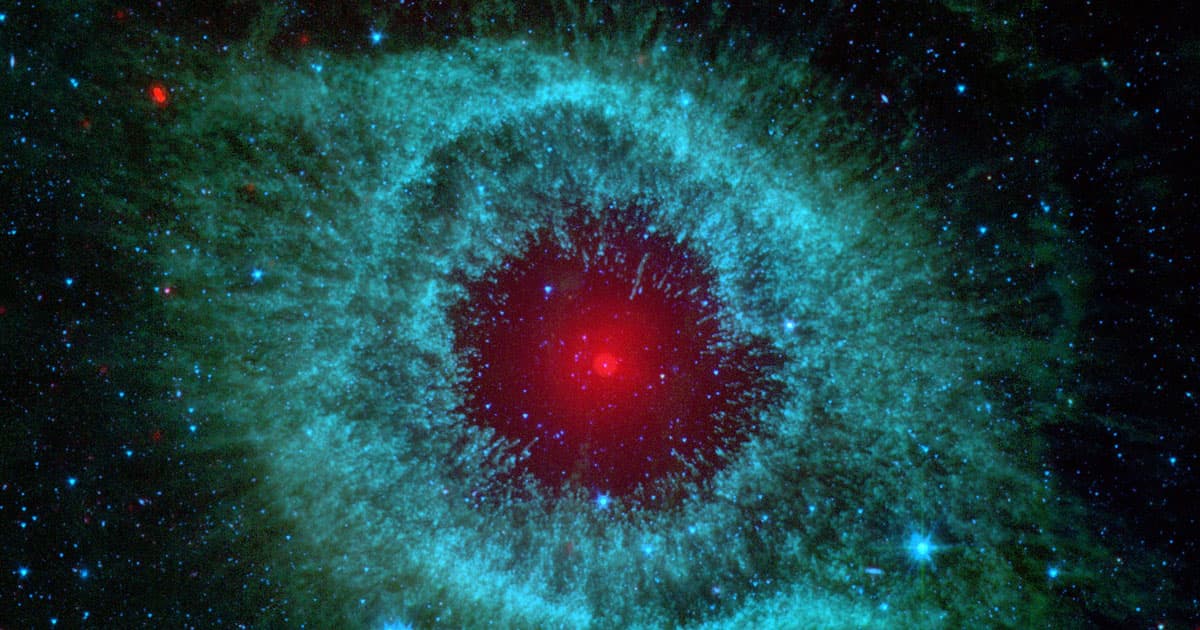 Image by NASA/JPL-Caltech/Univ. of Ariz.

Physicists at Barcelona, Spain's Institute of Photonic Sciences recently built a new molecular scale. It's a virus-sized bead that floats in a tiny vacuum chamber, held aloft by a focused infrared laser beam. And they say that it could be the key to detecting high-frequency waves and even dark matter, the elusive and invisible substance that makes up 85 percent of all matter in the universe, according to a new WIRED feature.

The actual science gets circuitous, so bear with us for a moment. Research published on the preprint server ArXiv last week described how the bead can reliably and consistently measure objects as small as an individual molecule with considerably less error than existing molecular scales.

When an object such as a molecule is attached to the floating bead, the physicists can perturb it with a tiny force and determine the mass of the object by looking at how fast the bead oscillates, like a tiny metronome.

Currently, the scientists who invented the scale are working on experiments to unravel the mysteries of how gravity works by measuring the minute gravitational forces that the bead and a nearby sliver of gold exert on each other, according to WIRED. The team also hopes to use its floating bead system to detect high-frequency gravitational waves, which the scientists believe would cause the laser suspending the bead to bend out of shape.

It's that type of wave that would help physicists spot dark matter, something that so far no one has been able to do. That's because the waves are caused when a theoretical dark matter particle called an axion runs into the powerful forces given off by a black hole, according to a different WIRED story.

Whether or not the minuscule glass bead is up to the task of finally providing us with direct evidence of dark matter is yet to be determined. But in the meantime, it shows that scientists are actively coming up with original ideas that are wildly different from the warehouse-sized detectors usually tasked with the search for dark matter.

Read This Next
Quacks Like a Duck
Those Headlines About Scientists Building a Wormhole Are Total Nonsense, People
Dark Secrets
Scientists Just Detected the Oldest Dark Matter Ever Observed
Walled Up
Scientists Say Space Is Filled With Invisible Walls
Turn Back Time
Scientists Say There May Be a Mirror Universe in Which Time Runs Backwards
Into Darkness
Inside NASA's Bold Proposal to Probe the Mysteries of Dark Matter
More on Hard Science
Tractor Beam
Yesterday on the byte
Scientists Build Working Tractor Beam, Although It's Comically Tiny
Having a Blast
Jan 18 on the byte
New Study Shows Where You Should Hide to Survive a Nuclear Attack
Offworld Amino
Jan 15 on the byte
Scientists Find Building Blocks of Life in Meteor That Smashed Into Family's Driveway
READ MORE STORIES ABOUT / Hard Science
Keep up.
Subscribe to our daily newsletter to keep in touch with the subjects shaping our future.
+Social+Newsletter
TopicsAbout UsContact Us
Copyright ©, Camden Media Inc All Rights Reserved. See our User Agreement, Privacy Policy and Data Use Policy. The material on this site may not be reproduced, distributed, transmitted, cached or otherwise used, except with prior written permission of Futurism. Articles may contain affiliate links which enable us to share in the revenue of any purchases made.
Fonts by Typekit and Monotype.