An Oxford Scientist May Have Solved the Mystery of Dark Matter

And it's a mind-bender. 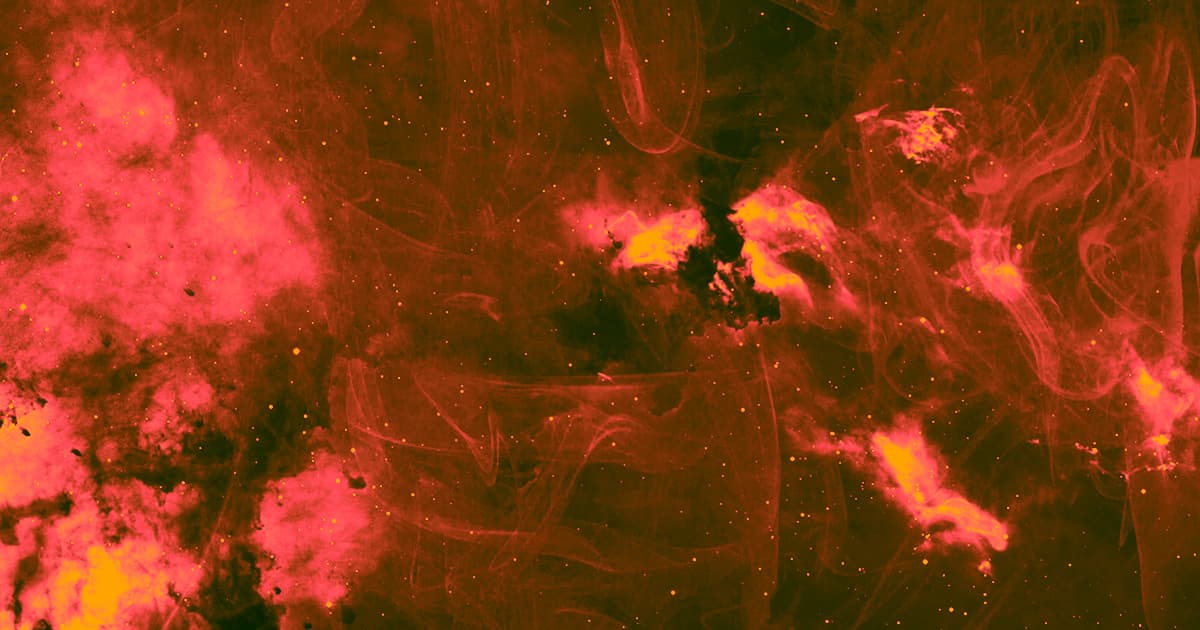 One of the most galling mysteries in physics is that of dark matter and dark energy, the names given to the unknown material and energy that observations suggest permeate the universe, but that we can't see. Scientists believe that together, these dark materials could account for up to 95 percent of the total mass in the universe.

Now, a researcher at the University of Oxford says a new theory could explain all that "dark phenomena" — and it's a mind-bender.

The research, published in the journal Astronomy and Astrophysics, suggests that dark matter and energy can both be explained if they're treated as a "negative mass fluid." Basically, this invisible fluid behaves the opposite way of all conventional materials: if you push it, it would accelerate toward you instead of away.

Jamie Farnes, the Oxford astrophysicist behind the new theory, created a computer model to explore how this dark fluid would affect the universe. He found that it could explain why galaxies hold together as they spin instead of flying apart — a tantalizing hint that his new model might solve existing astrophysical conundrums.

In an essay for The Conversation, Farnes concedes that the negative mass theory could be incorrect — but also expresses hope that, if it's borne out by future observations, it could provide a new model for explaining the mysteries of the cosmos.

"Despite these efforts, a negative mass cosmology could be wrong," he wrote. "The theory seems to provide answers to so many currently open questions that scientists will — quite rightly — be rather suspicious. However, it is often the out-of-the-box ideas that provide answers to longstanding problems. The strong accumulating evidence has now grown to the point that we must consider this unusual possibility."

READ MORE: Bizarre ‘dark fluid’ with negative mass could dominate the universe – what my research suggests [The Conversation]

More on dark matter: A New Trick Lets Us Weigh The Galaxy. It’s The First Step Toward Figuring Out What It’s Made Of

Read This Next
Hubble Tension
Most Precise Measurements of the Universe Suggest That Something Is Very Wrong
Dark Secrets
Scientists Just Detected the Oldest Dark Matter Ever Observed
Walled Up
Scientists Say Space Is Filled With Invisible Walls
Turn Back Time
Scientists Say There May Be a Mirror Universe in Which Time Runs Backwards
Into Darkness
Inside NASA's Bold Proposal to Probe the Mysteries of Dark Matter
More on Hard Science
Tractor Beam
Thursday on the byte
Scientists Build Working Tractor Beam, Although It's Comically Tiny
Having a Blast
Jan 18 on the byte
New Study Shows Where You Should Hide to Survive a Nuclear Attack
Offworld Amino
Jan 15 on the byte
Scientists Find Building Blocks of Life in Meteor That Smashed Into Family's Driveway
READ MORE STORIES ABOUT / Hard Science
Keep up.
Subscribe to our daily newsletter to keep in touch with the subjects shaping our future.
+Social+Newsletter
TopicsAbout UsContact Us
Copyright ©, Camden Media Inc All Rights Reserved. See our User Agreement, Privacy Policy and Data Use Policy. The material on this site may not be reproduced, distributed, transmitted, cached or otherwise used, except with prior written permission of Futurism. Articles may contain affiliate links which enable us to share in the revenue of any purchases made.
Fonts by Typekit and Monotype.