"It’s simple. If it’s not affordable, people won't use it." 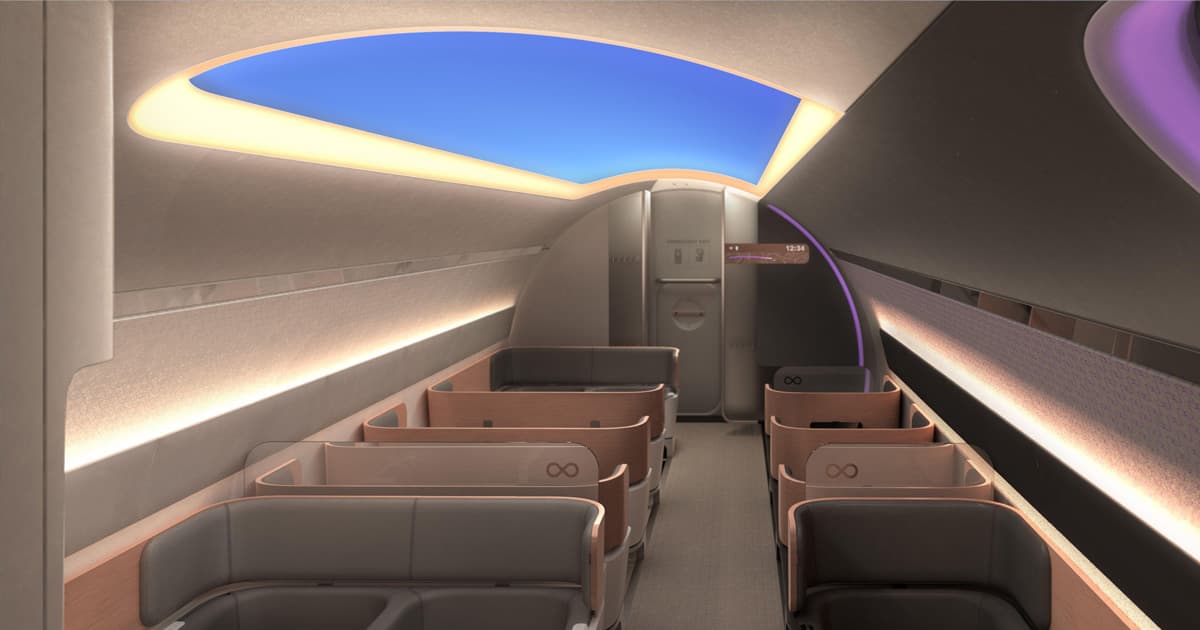 Virgin Hyperloop has released a new video showing what the experience of being shot inside a pod down a vacuum tube at breakneck speeds could one day look and feel like.

It's an ambitious vision of the future of transportation. The concept video goes through each step in the travel process, from check-in to disembarking.

The experience seems reminiscent of going to an airport to catch a plane. The interior of the shuttle, however, feels more inspired by rail travel, with wide open cabins and face-to-face seating.

The biggest difference, however, is that there are no windows — except for what appears to be a generous skylight above. That's because the magnetically levitating pod is racing through an vacuum tube at speeds of up to 760 mph.

To make it feel less claustrophobic, the design team is focusing on bringing the outside in. "Bands of greenery and wood textures subvert the aesthetic of typical mass transit materials with something optimistic and fresh," John Barratt, CEO and president of design company Teague, which designed the pod interiors, said in a statement.

"All lighting in the pod — including the unassuming information displays — are dynamic and adjust based on traveler activity and journey milestones," Barratt said.

It's a futuristic mode of transportation that won't begin commercial operations until at least 2030, according to Virgin.

But it has made some headway with the technology. A first passenger test of the system back in November managed to accelerate two Virgin Hyperloop execs to a speed of 107 mph in just 6.25 seconds.

"It felt not that much different than accelerating in a sports car,” Virgin Hyperloop co-founder and first passenger Josh Giegel told The New York Times at the time.

In the future, Virgin Hyperloop is hoping to transport thousands of passengers an hour inside large convoys of 28-passenger-capacity pods. The individual pods will be within milliseconds of each other during travel, according to the company.

The company is now trying to figure out a way to drive down costs to make it more affordable than flying. "It’s simple. If it’s not affordable, people won't use it," Jay Walder, CEO of Virgin Hyperloop, said in the statement.

"Daily high-speed transport is currently not feasible for most people, but we want to change that notion," Walder said. "Imagine being able to commute between cities that are currently hours apart in minutes — and the endless possibilities that opens up."

Read This Next
Veillance What?
Startup Says Train Powered by "Veillance Flux" Could Travel 620 MPH
Looped In
See a Startup's Newly Unveiled Hyperloop Test Track
Musk Read
Elon Musk’s Boring Co. Didn’t Ask Homeowners Before Tunneling Under Them
Futurism
Elon Musk Says Hyperloop Will Put Pedestrians, Mass Transit First
Futurism
Musk's Boring Company Is Pushing Forward With East Coast Hyperloop
More on Advanced Transport
Netflix and Drive
Monday on futurism
Mercedes Claims to Have Achieved Level 3 Automation, Beating Tesla
Battery Trouble
Monday on the byte
Tesla "Spontaneously" Bursts Into Flames While Driving Down Freeway
High Tide
Jan 27 on the byte
We’re in Awe of Amsterdam’s Huge Underwater Bike Parking Garage
READ MORE STORIES ABOUT / Advanced Transport
Keep up.
Subscribe to our daily newsletter to keep in touch with the subjects shaping our future.
+Social+Newsletter
TopicsAbout UsContact Us
Copyright ©, Camden Media Inc All Rights Reserved. See our User Agreement, Privacy Policy and Data Use Policy. The material on this site may not be reproduced, distributed, transmitted, cached or otherwise used, except with prior written permission of Futurism. Articles may contain affiliate links which enable us to share in the revenue of any purchases made.
Fonts by Typekit and Monotype.