It's generating some serious buzz. 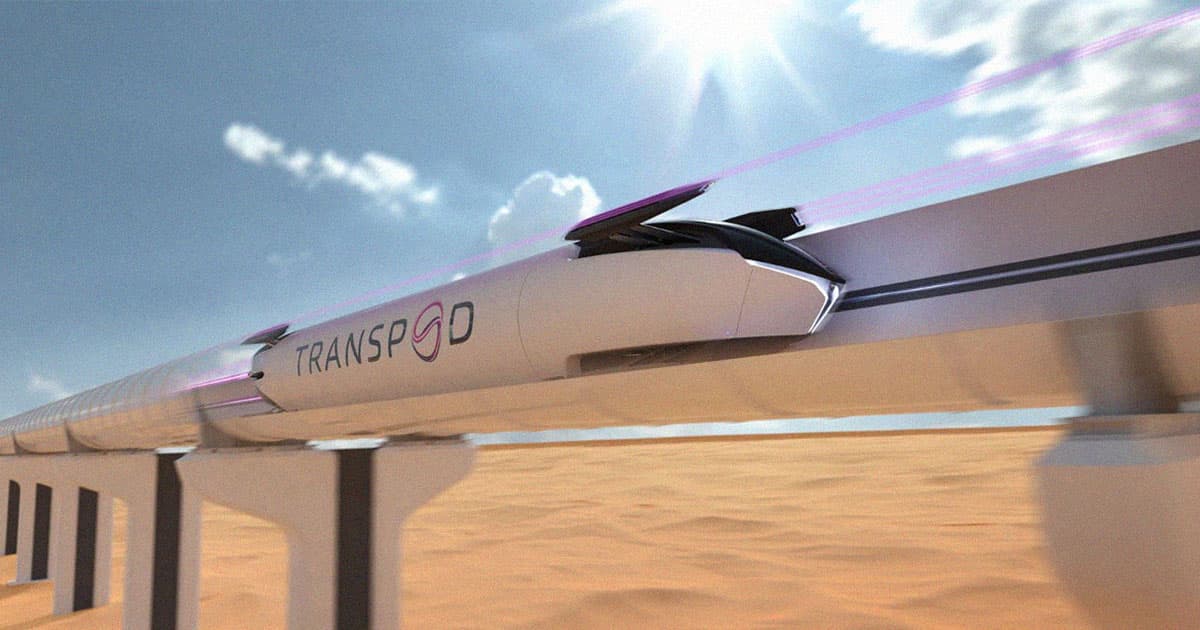 And we can't shake the feeling that we've seen this kind of design before. Remember the "Hyperloop?"

The Hyperloop is a concept popularized by Tesla CEO Elon Musk eons ago. But despite millions in funding, the handful of Hyperloop companies in existence have yet to break any meaningful ground — and we can't help but wonder if TransPod will suffer a similar fate.

According to the company, its "FluxJet" is "a hybrid between an aircraft and a train," and relies on electricity alone for propulsion.

Each pod is just over 80 feet long and can fit up to 54 passengers. Within cities, the train will more or less operate like a maglev monorail, but out in the open, it's designed to blast through vacuum-sealed tubes, like the Hyperloop.

The company is promising "technological leaps in contactless power transmission," as well as leveraging a "new field of physics called veillance flux" — the meaning of which the company has yet to elaborate on — which would allow it to travel along its track at up to 621 mph.

That's substantially faster than any high-speed trains or even commercial jets. Passenger tickets will also be 44 percent less expensive than plane tickets, the company says.

Needless to say, that sounds like some serious over-promising. But if the company is to be believed, initial plans for the first FluxJet are already in the works.

So far, all we've seen is an early scaled-down prototype of the sleek transporter that TransPod showed off at a July event in Toronto, Canada — and some sleek renders, of course.

The company is eyeing a tube connecting the 200 mile stretch between the Canadian cities of Edmonton and Calgary, but whether it'll ever be able to break ground on the project remains to be seen.

Despite around half a billion dollar funding from British investors Broughton Capital Group and the Chinese state-owned China-East Resources Import & Export Co, TransPod still has a long way to go.

For starters, according to CNBC, the intercity FluxJet connection will cost $18 billion to build.

Whether it'll have more luck in building out transportation lines than the likes of Virgin Hyperloop One — which has yet to make meaningful strides towards connecting locations despite a ton of hype over many years — remains to be seen.

READ MORE: This Canadian company wants to build a train-plane ‘hybrid’ that can go 620 miles per hour—take a look [CNBC]

Read This Next
Hyperloopy
Here's What Traveling By Hyperloop Could Look Like
Looped In
See a Startup's Newly Unveiled Hyperloop Test Track
Musk Read
Elon Musk’s Boring Co. Didn’t Ask Homeowners Before Tunneling Under Them
Futurism
Elon Musk Says Hyperloop Will Put Pedestrians, Mass Transit First
Futurism
Musk's Boring Company Is Pushing Forward With East Coast Hyperloop
More on Advanced Transport
Kapow
Feb 3 on the byte
Self-Driving Car Plowed Into Active Fire Scene, Forcing Firefighters to Smash Its Window
Netflix and Drive
Jan 30 on futurism
Mercedes Claims to Have Achieved Level 3 Automation, Beating Tesla
Battery Trouble
Jan 30 on the byte
Tesla "Spontaneously" Bursts Into Flames While Driving Down Freeway
READ MORE STORIES ABOUT / Advanced Transport
Keep up.
Subscribe to our daily newsletter to keep in touch with the subjects shaping our future.
+Social+Newsletter
TopicsAbout UsContact Us
Copyright ©, Camden Media Inc All Rights Reserved. See our User Agreement, Privacy Policy and Data Use Policy. The material on this site may not be reproduced, distributed, transmitted, cached or otherwise used, except with prior written permission of Futurism. Articles may contain affiliate links which enable us to share in the revenue of any purchases made.
Fonts by Typekit and Monotype.