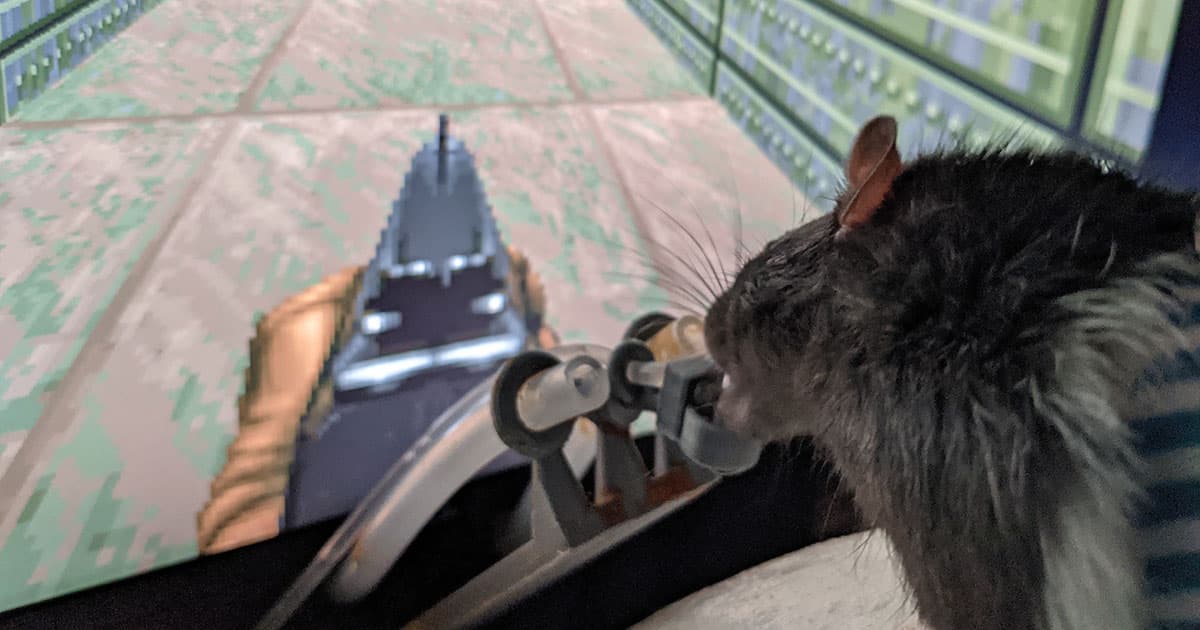 No, it wasn’t just a strange hobby. No, he wasn’t trying to start a Twitch channel. The Hungarian software engineer and neuroscientist wanted to learn more about brain computer interfaces, while showcasing the potential insights researchers could gather through similar experiments.

His rat training setup was equal parts bootstrap and scrappy, he wrote in a viral Medium post, consisting of a large polystyrene ball that could be rolled in any direction via ball bearings. A rat was suspended in a harness on top, where it could move the ball with its feet, which sensors translated into movement in the game world and mirrored it onto a curved computer monitor in front of the gaming rodents.

So as the rat moved about on the ball, it would also move about in the video game’s famous corridors. Tóth reinforced the rat’s movements with a little tube that gave it sugary water as a treat whenever it did a "right" thing, such as walk down the corridor. All told, Tóth said, the setup cost less than $2,000.

It was a bold, ambitious, and downright silly science project, so naturally, we had to learn more. We tracked Tóth down to ask him about what it was like to train rats to become gamers — and whether or not he ever plans on starting that Twitch channel.

This interview has been edited for clarity and length.

Futurism: Where does an idea to do something like train rats to play a video game even come from?

Victor Tóth: The idea just came out of basically nowhere. I was just like, "Why not?"

I think it was also around the time when Neuralink put brain implants in pigs to analyze snout detection. Then this idea came to me. I saw that something like that had some use cases.

It’s very relevant to brain computer interfaces (BCI) — a space I’m trying to get into in the long run. There are a couple of players in the space like Neuralink, BlackRock, and Paradromics that are testing their devices on monkeys and then rolling them out to humans. But the thing is that a lot of that cognitive capacity is already present in rats — so why can’t we just use rats?

Part of the reason is that you can’t fully train a rat to play something like "Pong," right? The research design is difficult, but once you bridge that by training the rats in virtual environments, that’s huge. You can record all kinds of brain signals from the rats, like simple visual cortex information, or you can go higher up to decision making and planning.

It seems very complicated and hasn’t really been done — but you can do this in the same setup I used. The only thing that changes is the software, or the game the rat is playing.

Other than that, I did it because it’s just cool.

Why did you choose "Doom II"? Why not "Duke Nukem," "Wolfenstein," or "The Legend of Zelda"?

VT: The plan was always to train them on the first map of "Doom II." I thought the first map was perfect because it has all kinds of environments. It has a very easy start too, with clear corridors and simple turns. It’s also a bigger space, so you can test a lot of stuff in there.

"Doom II" also has a very easy to edit map. I was able to scrap the first corridor out of the map and make the doors open on touch when a rat approached it. So there’s no button they need to press or behavior they need to exhibit to actually open doors.

I designed different iterations of the same map with the imp — aka the bad guy — at different positions. For the shooting training, I randomly selected one of these maps so every time the rat started from the beginning, the imp was at a different position. That’s so the rat doesn’t learn to shoot at a specific point, but that it’s the imp itself that needs to be shot.

How far were the rats able to go through the maze?

They weren’t able to complete the full maze. Romero, one of the three rats I used, performed the best. I was actually able to start training him to do the shooting part on a separate device. The idea was that if they push their front legs up and rear back, then the harness they were connected to could push a button above it with a separate arm attached to it. That button would do the shooting.

When Romero got to an imp, I would pull the arm up and that would initiate the shooting. It’s the same operant conditioning logic as with the running and the sugary water — but Romero was just confused. He was just like, "What’s happening? Why is this thing in front of me? Why am I getting rewards?" At that point, he couldn’t catch what was going on.

By then, I gave myself a hard deadline for the end of July this year — and I just couldn’t finish training Romero in time.

Neuroengineer Viktor Tóth trained three rats to play "Doom II." Here's a video of one of the rats Romero getting surprised by an imp during shooting training! 🐀 pic.twitter.com/whrTftl4mr

I can’t imagine it’s easy training rats to do anything, let alone play a first-person shooter.

VT: At the beginning I naively thought, "I’m going to get a couple of rats. It’s going to take a week for them to get used to me. Then it’s going to take another week until they run on the ball." That was far from what actually happened.

This was my first ever animal experiment. It was a huge learning process for me too. So instead, it took two weeks for them to get used to me. Meanwhile, I was watching a ton of these rat training videos on YouTube showing me how to pet them, approach them, play with them, and all that. I mean, it was fun. It just took a lot of time.

Then I started to put them on the ball — but I couldn’t make them run. First, I had to teach them to eat from the ball where the sugary water was. Then I started to train them to run — but they would get scared and jump off the ball whenever they heard the linear actuator go on, or a motor start running. After a while they got used to it.

Relative to most behavioral experiments, it didn’t take that long, but still. There were so many things I didn’t take into account.

Any plans to start Twitch streaming?

Yes, I think so. I think it’s a very valid way to monetize a project like this. The only problem is how long the rat can run for.

I had Romero running for 15 minutes one time, which was great. That was crazy because he was doing it for so long and didn’t get tired or want to get off. So if you can actually get the rat to a point where it actually expresses a curiosity in the game, then it could get really interesting.

If you could get to that point and rats would actually "play" for 10 or 20 minutes straight, then yeah. Twitch streaming would be a very valid way to get this in front of people.

Do you have plans to build off of this project? Perhaps teach the rats to play a new game?

VT: Yes. I was in America when I conducted the experiment and moved back to Hungary. I brought all the electronics from the experiment with me, but didn’t bring the ball and the aluminum frame. I’m already speaking to some electrical engineer friends of mine, though, and I want to make the next iteration somewhat more professional.

The original setup was kind of hacky. If you look in the video, you can see there are wires everywhere. There’s that and a couple things I’m going to change in the next.

During the first experiment, people came up to me with different ideas for games the rats could play. One of them that I liked was 3D Pac-Man because behaviorally, it makes sense. The rats don’t really like to attack stuff. They run away from things in the wild. That’d be the dynamic with 3D Pac-Man. You’d have to look back to see if there’s a ghost behind you.

Of course, this setup isn’t realistic yet because the rat has to turn around.

VT: Yeah, and it’s just very difficult for the rat. That’s why these Doom-like first-person shooter games just make more sense. It’s just easy and fun to have the rats run and shoot.

More on rats: Our Attempts to Kill Rats Are Making Them Evolve at Super Speed

Read This Next
Bow to Your New God
Neuralink Co-Founder Has an Idea for a New Religion
Futurism
Personalized, Brainwave-Guided Movies Are Cool, As Long As You’re The One Steering
Futurism
Cheap Drug Breathalyzers Are On The Way, If We Can Figure Out How To Use Them
Futurism
Brain Implants Will Drive Our Evolution and “Extend Our Capabilities”
Futurism
Duke Neuroscientist: Brain Augmentation Will Allow Us to Make a New Kind of Human
More on Future Society
Shkreli Strikes
6:10 PM on the byte
Martin Shkreli Dumps Huge Stake in His New Crypto, Causing It to Crash
Meta-Terrorism
4:16 PM on futurism
OnlyFans Accused of Paying Bribes to Put Enemies on Terrorist Watchlist
Going Up
Yesterday on the byte
The World Population Is Going to Hit 8 Billion Any Day Now
READ MORE STORIES ABOUT / Future Society
Keep up.
Subscribe to our daily newsletter to keep in touch with the subjects shaping our future.
+Social+Newsletter
TopicsAbout UsContact Us
Copyright ©, Camden Media Inc All Rights Reserved. See our User Agreement, Privacy Policy and Data Use Policy. The material on this site may not be reproduced, distributed, transmitted, cached or otherwise used, except with prior written permission of Futurism. Fonts by Typekit and Monotype.