Watch the US Military Kill an Aircraft With an Energy Weapon

Get ready for an international arms race in destructive energy weapons. 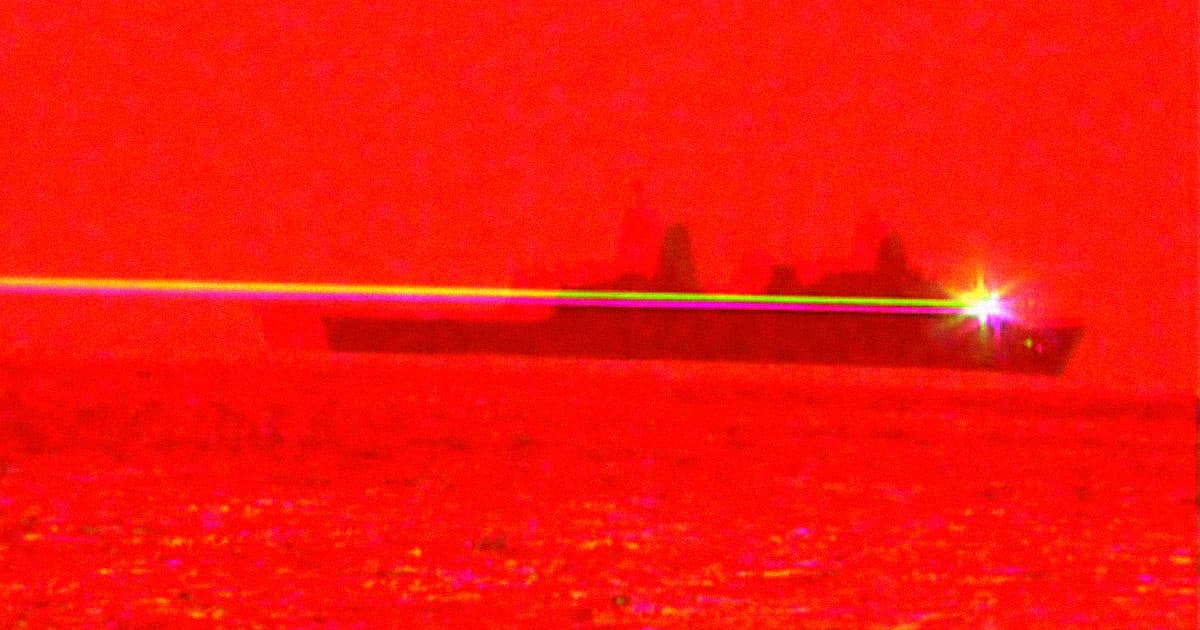 A powerful laser weapon system on board the US Navy ship USS Portland "successfully disabled an unmanned aerial vehicle" during a test on May 16 in the Pacific ocean, according to a government statement.

A video of the test shows the weapon blast an intense ray at a drone — which appears to catch fire almost immediately.

According to a recent report, the market for similar energy weapon systems are on the rise across the globe, with a new arms race as nations look for novel ways to enhance border security and counter threats including drones and missiles.

"With this new advanced capability, we are redefining war at sea for the Navy," Karrey Sanders, commanding officer of the USS Portland, said in the statement.

The UK is also working on its own 50-kilowatt laser weapon system, called "Dragonfire," to protect maritime and land forces from missiles or enemy mortars. Russia and China are both working on energy weapons, as well as India, Iran and Turkey.

The US may have been working on laser weaponry since at least the 1960s, but this latest test was different. According to the Navy, the test was its first with a high-energy class solid-state laser — a new class of energy armament that could be "paving the way for future weapon systems," according to Sanders.

This new laser weapon system is suspected to feature a much more powerful 150-kilowatt laser, according to CNN, which would be a major step up in destructive power.

Previous laser weapon systems tested by the US Navy featured 15 and 30 kilowatt lasers, as The Drive reports, and those systems were already powerful. For instance, the Navy's Laser Weapons System (LaWS), a 30-kilowatt system, was able to down an aircraft during a 2017 test.

"Five years ago, few people worried about the drone threat," Roy Azevedo, president of Raytheon Space and Airborne Systems, said in a statement at the time. "Now, we hear about attacks or incursions all the time."

There have already been reports of international skirmishes using energy weapons. Back in February, the US Navy claimed that a Chinese warship fired a laser weapon at one of its surveillance aircraft.

"Weapons-grade lasers could potentially cause serious harm to aircrew and mariners, as well as ship and aircraft systems,” read a Navy statement at the time.

READ MORE: The US successfully tested a laser weapon that can destroy aircraft mid-flight [CNN]

Read This Next
Futurism
Navy to Shell Out $11 Million on D-Wave Quantum Computer
Futurism
The US Navy: Turning The Oceans Into Fuel
More on Sci-Fi Visions
From the Dept. of...
12:00 AM on futurism
The Best Humidifiers of 2023
Human v. Giraffe
Jan 24 on the byte
Chaotic Italian Fashion Line Baffles Facial Recognition Software
Step One
Jan 24 on the byte
World’s Third Richest Person Says He’s Developed "Addiction" to ChatGPT
READ MORE STORIES ABOUT / Sci-Fi Visions
Keep up.
Subscribe to our daily newsletter to keep in touch with the subjects shaping our future.
+Social+Newsletter
TopicsAbout UsContact Us
Copyright ©, Camden Media Inc All Rights Reserved. See our User Agreement, Privacy Policy and Data Use Policy. The material on this site may not be reproduced, distributed, transmitted, cached or otherwise used, except with prior written permission of Futurism. Articles may contain affiliate links which enable us to share in the revenue of any purchases made.
Fonts by Typekit and Monotype.