The Top 13 Wildest Objects That Terrible Droughts Have Revealed 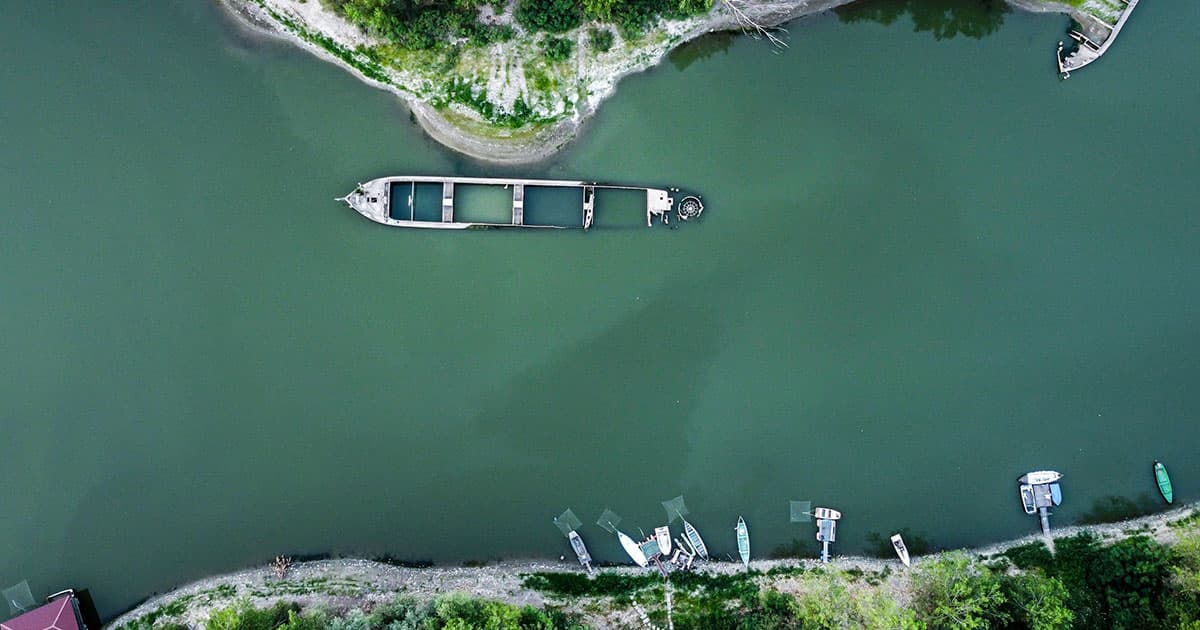 There's little question at this point — a preponderance of evidence suggests that the Earth's climate is changing rapidly.

Across the globe, power grids are struggling to keep up with heat waves and entire countries are battling deadly flooding and energy crises — and that's in addition to disasters exacerbated by supply chain shortages.

As water levels dip dangerously low, river and lake beds are revealing long-forgotten and hidden objects the rest of the world was never meant to see. Climate change sucks, but the secrets it uncovers are morbidly fascinating, so we've collected the wildest 13 mysterious the world's dried-up, parched waterways have unearthed.

The stumps were found in the northern province of Friesland, part of the Netherlands, and are estimated to be between 10,000 and 15,000 years old.

In July, Newsweek reported that an eerie shipwreck from an unknown date was found just about 10 feet from the shoreline of Lake Mead — located in Nevada and Arizona — shoreline as water levels hit record lows.

The wooden wreck still had utensils, a telephone, plaques and a bottle of nail polish on board.

Dozens of warships of Hitler's Black Sea fleet were scuttled in 1944 in the Danube river. 10,000 explosive devices hidden within the exposed wreckage, said a Serbian minister. Europe's drought is bringing history back to the surface. https://t.co/fhLj9rpxZP

Germany scuttled the ships in 1944 to avoid their falling into enemy hands during a retreat, but they're still laden with metric tons of dangerous ammunition and explosives.

A view of the Roman camp Aquis Querquennis, located on the banks of the Limia River in Galicia, Spain. The camp is usually under water but can now be seen because of the low water levels. pic.twitter.com/LDP0X1sc9g

In northwest Spain, levels at the Limia River are so low an entire forgotten Spanish village was unearthed last week.

The BBC shared an image of what the Roman camp, called Aquis Querquennis, looked like on the banks of the Limia River before it was covered by water.

This week, CNN reported that the river has dried up so badly that it revealed a small stone island — complete with three statues of Buddha thought to be at least 600 years old.

In Italy, the Po River has gotten so low that it revealed an unexploded bomb from the second World War.

At the beginning of August, CNN reported that thousands of locals were evacuated while officials removed the bomb's fuse and cleaned the area.

For the second time since 2019, an ancient stone formation in Spain has been made visible by the historic drought. Called the Dolmen of Guadalperal, the site has about 150 granite stones in a circular pattern.

Yesterday, Ars Technica reported that other artifacts have been found, and that the site was most likely built between 2000 and 3000 BCE.

6. Another Village, But Welsh

Remnants of a Welsh village called Llanwddyn haven't been visible since the 1970s, but CNN reported earlier in August that the entire town can now be seen on the dry banks of the Lake Vyrnwy reservoir.

The town was flooded in the 1800s during a construction project.

A drought in Italy revealed the ruins of an ancient bridge over the River Tiber that was reportedly built by Roman emperor Nero around 50 AD.

Although smaller portions of the ruins have been visible in previous years, Reuters reported in June that the bridge is the most visible it's ever been.

As bodies of water have dried up in previous drought conditions, Europeans throughout the centuries marked stones with dates, phrases and warnings. In periods when rainfall increases, these "hunger stones" aren't visible, making their appearance creepy.

"When you see me, weep," is inscribed on the most famous hunger stone, located in the Czech Republic according to a Big Think report last week.

In Ireland, drought revealed a manmade island called a crannog near Lough Neagh. The New York Post reported in July the medieval dwelling was built in a swamp, and that it would've been fit for any local royalty of the day.

A park spokesperson told the outlet the tracks most likely belonged to a dinosaur called Acrocanthosaurus, which weighed nearly seven tons.

The aforementioned Lake Mead has been giving up its dead as its banks grew dryer. While some bodies are thought to belong to drowning victims, others are clearly from past murders — like remains found inside a barrel.

And this week, Newsweek reported that officials estimate there are hundreds of bodies still buried or hidden in Lake Mead, so we may be hearing about many more.

Whether you find these developments cool or creepy, they all share something in common — droughts linked to climate change.

As much as we'd like to think dead bodies will stop popping up, it's likely we're just getting started.