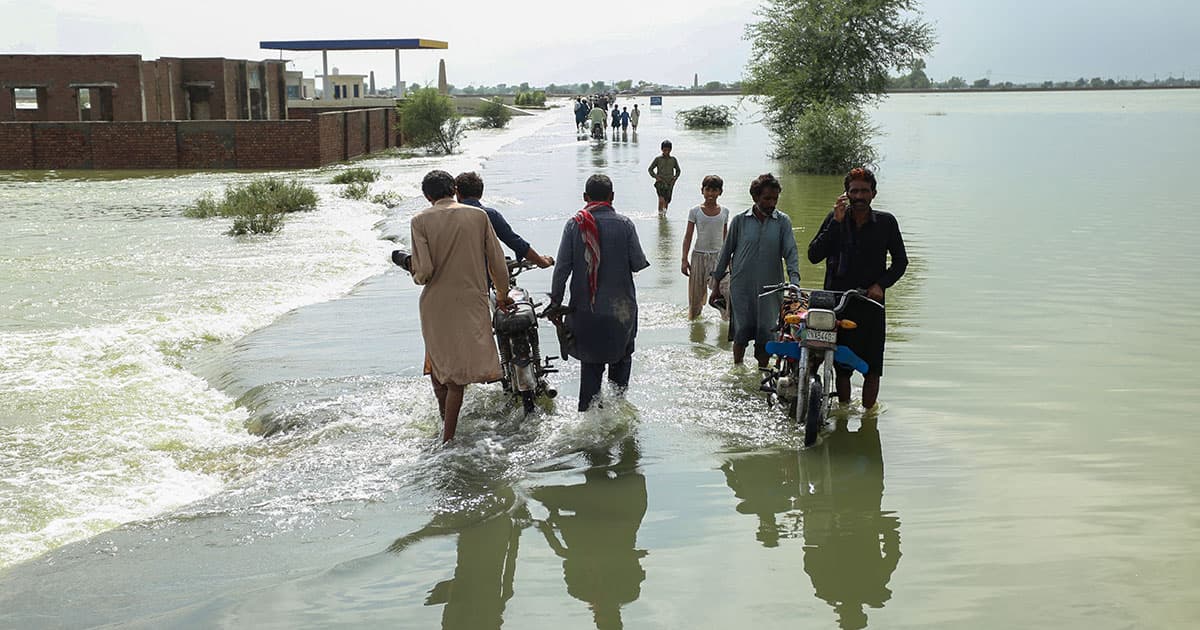 At Least 900 Dead, 50K Homeless in Pakistan After Summer Floods

"This is a climate-induced humanitarian disaster of very epic proportion."

"This is a climate-induced humanitarian disaster of very epic proportion."

More than 900 people are dead and 50,000 more are homeless in Pakistan following record breaking amounts of rain, with CNN reporting that tragically, 326 of those killed were children.

The devastation, which began in June of this year, is being linked to climate change.

Bloomberg reports that Pakistan's economy was already fragile, but that the flooding has caused heavy damage to important crops like cotton, with CNN reporting that more than half a million livestock animals have been killed as well.

Economic ills pale in the face of the humanitarian crisis, though, with Pakistani armed forces and the National Disaster Management Authority evacuating stranded residents with boats and trucks while officials say they need more help.

On Wednesday, China publicly pledged emergency humanitarian relief and said the country would send 25,000 tents and $300,000 in emergency cash.

July was the rainiest month in 30 years, according to CNN, and it's even worse in Balochistan, one of the country's worst-hit areas. Balochistan borders Iran and Afghanistan and received a whopping 305 percent more rain than the annual average this season.

The news is heartbreaking, but it's unfortunately not unique.

Flooding killed at least 40 people in Kentucky this month after strip mining made landslides much more dangerous. In Sudan, at least 50 people have died because of seasonal flooding, and experts predict California could get its own super-flood soon.

As climate change worsens, in other words, deadly flooding is only going to cause more damage.

More on an eco-friendly transition: Several Companies Are Switching From Cargo Vessels to Wooden Sailing Ships

Bitcoin Ban
Another Entire Country Just Banned Crypto Mining
1. 9. 22
Read More
Climate Connection
Bill Gates Attempts to Explain Why He Bought More Farmland Than Anyone Else in America
3. 22. 21
Read More
Brands We Love
Listen Up, Entrepreneurs: It’s Time to Launch Your Clean Water Solution
4. 1. 19
Read More
+Social+Newsletter
TopicsAbout UsContact Us
Copyright ©, Camden Media Inc All Rights Reserved. See our User Agreement, Privacy Policy and Data Use Policy. The material on this site may not be reproduced, distributed, transmitted, cached or otherwise used, except with prior written permission of Futurism. Articles may contain affiliate links which enable us to share in the revenue of any purchases made.
Fonts by Typekit and Monotype.