Where Is Alien Life? Six Of The Top Theories 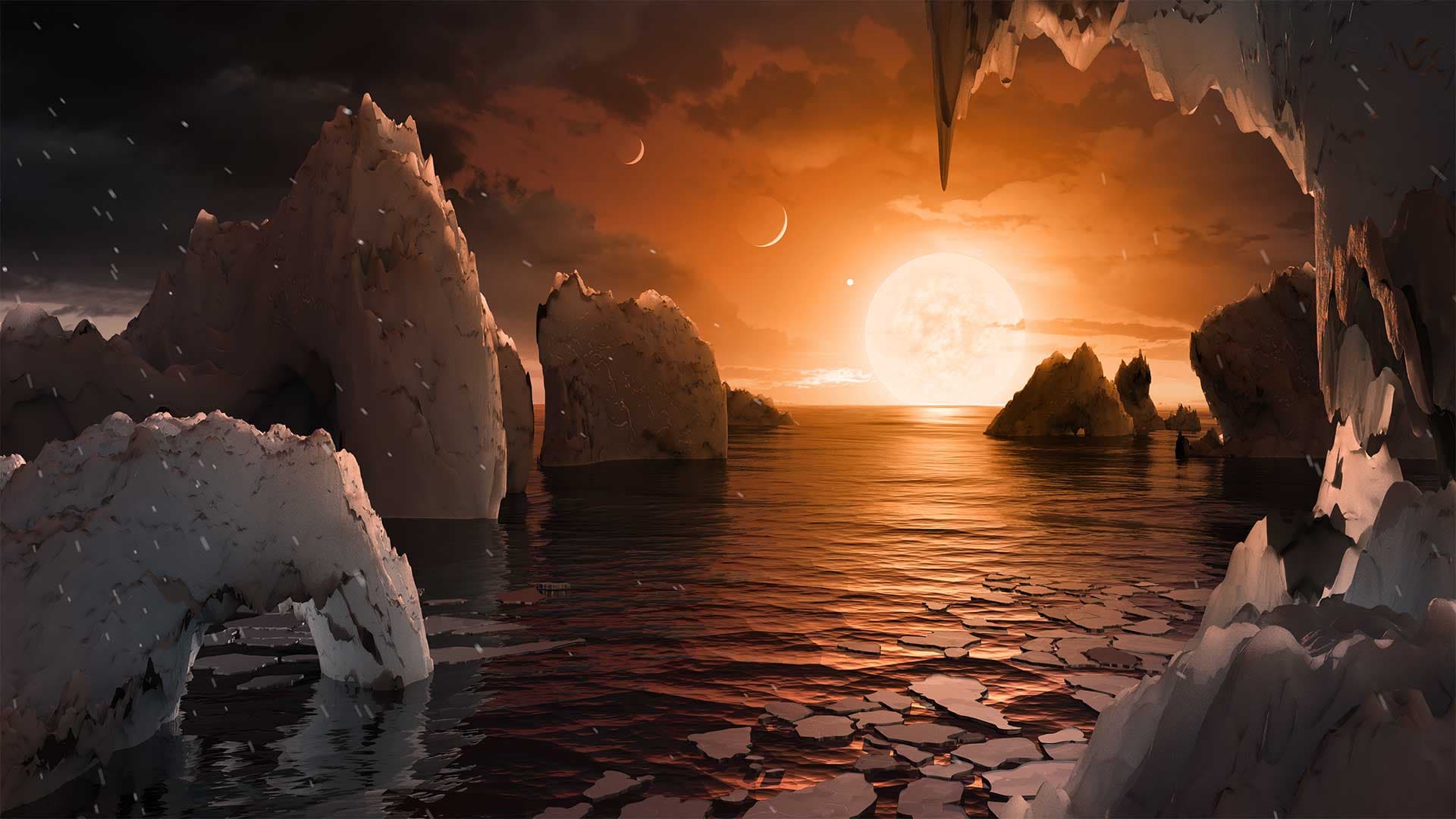 We have accomplished a lot in our (relatively) short time on Earth. We've sent humans to the Moon and to live in space, developed massive and sophisticated telescopes to see the farthest reaches of the cosmos, and even rocketed rovers to Mars and probes to the edge of our solar system. However, a number of organizations have taken humanity's voyage into the final frontier a step farther. NASA, the European Space Agency, and the research collective behind the Search for Extraterrestrial Intelligence (SETI) have been working tirelessly to find out if we are alone, once and for all.

Already, a number of projects exist that scan the stars for signs of intelligent life. And despite the fact that many of them have been looking to the skies for decades, we have yet to make contact. And that's a bit of a problem.

The Paradox That Started It All

To put it mildly, our solar system is very old. In fact, scientists are still figuring out just how old — clues gathered from meteorites suggest it is almost 5 billion years old, and surrounding star systems are likely billions of years older. While interstellar travel still seems to be a distant dream, new technology is born every year that allows us to scan the skies for signals from civilizations in the most distant corners of the cosmos. The number of known alien worlds and star systems discovered through these technologies continues to rise, but our creative methods of listening to space have not yet revealed anything that resembles extraterrestrial communications or civilizations.

Given the size and age of our universe, it seems like we should have made contact. We, of course, have not.

In the early 20th century, physicist Enrico Fermi asked himself a now-famous question: Given the scope of our universe, why haven't we found intelligent extraterrestrial life yet (or why haven't they found us)? This is sometimes called the Fermi Paradox or the Great Silence. Scientists have floated many possible answers in the century since Fermi first asked this question. Here are some of the most plausible reasons why he haven't made first contact.

Basic probability asserts that alien life must exist. Since we haven't made contact yet, one theory goes, there must be something barring life from interstellar travel or, at least, barring it from communicating with other alien species. This barrier is known as the "Great Filter," and it is a force or event that stops a civilization from getting to the aforementioned point of interstellar travel or communication.

If the theory holds true, there are two primary reasons that we haven't made contact: Because societies kill themselves off before they reach a state advanced enough to explore the stars or interstellar travel is simply not possible on a technological scale. Neither option is particularly pleasing.

And according to the experts behind the work, the filter event is of equal or greater probability than the existence of alien life itself. This is the point argued by Robin Hanson, a research associate at the Future of Humanity Institute at Oxford University, in his discussion of the topic.

No alien civilizations have substantially colonized our solar system or systems nearby. Thus among the billion trillion stars in our past universe, none has reached the level of technology and growth that we may soon reach. This one data point implies that a Great Filter stands between ordinary dead matter and advanced exploding lasting life.

Since we have not been able to detect alien life (or leave the solar system much, for that matter), how far are we from being caught up in some event that would bar us from ever finding aliens? "The easier it was for life to evolve to our stage, the bleaker our future chances probably are," Hanson writes. In other words, the more life there is in the cosmos, the greater the likeliness that we are about to reach a cataclysmic, life-ending event or reach the cosmic limits of technological advancement.

Do Not Disturb the Aliens

Another hypothesis asserts that alien civilizations certainly exist, but they're simply inactive. That's the "aestivation hypothesis" (aestivation refers to an organism's state of prolonged inactivity, similar to a bear hibernating or a frog that buries itself in sand during hot weather), which was put forth by researchers from Oxford’s Future of Humanity Institute and the Astronomical Observatory of Belgrade.

The theory, published in a paper in the Journal of the British Interplanetary Society in 2017, states that aliens may be "hibernating" until the environmental conditions are just right to become active and build their super society. The researchers argue that the laws of thermodynamics directly limit computation, as computing technologies need to be cooled in order to function. This makes it exceedingly difficult to create advanced technologies, as keeping them cool at scale quickly becomes prohibitively difficult. So the aliens are falling into a dormant until, to be blunt, the universe cools.

But distilling the development of a civilization to the kinds of conditions that our current, and somewhat imperfect, models can predict could be reductive. What if intelligent extraterrestrial life has found a way around the thermodynamic conditions that limit its ability to compute? "What if there are other forms of value that can be generated?" the study authors write. If they're wrong about the relationship between thermodynamics and technology, the aestivation hypothesis would be moot. In this case, perhaps one of the other ideas here holds true.

According to the "Gaian Bottleneck" hypothesis, life needs particular environmental conditions to develop, and they're not so common. Astrobiologists at the Australian National University penned their explanation to the Fermi Paradox in 2016.

Extinction is "the cosmic default for most life that has ever emerged on the surfaces of wet rocky planets in the Universe," the researchers wrote. That's because a planet has to be actually inhabited for it to be habitable, because organisms change the concentration of greenhouse gases in the atmosphere. A Catch-22 emerges: no life without habitability, no habitability without life.

For alien life to persist, the researchers write, it must hang on: "like trying to ride a wild bull. Most life falls off." Life can only take place with the presence of an unlikely feedback loop. In this case, Earth is the exception to the rule.

In 2015, after nearly a decade in transit, NASA's New Horizons spacecraft became the first to do a close flyby of Pluto. It offered humanity its first look at its icy surface and raised questions about the possibility of subsurface oceans of water, and lots of methane and nitrogen. These questions put Pluto on a short but growing list of worlds with buried oceans trapped under a thick crust of ice and rock (some of the other worlds are Saturn’s moons Enceladus and Titan, as well as Jupiter’s moons Europa, Callisto, and Ganymede).

Those oceans figure prominently into another theory of where life might be lurking, one that Alan Stern, the principal investigator for New Horizons, touches on. Since buried oceans form a much more stable ecosystem than flowing surface streams, changes such as altering tides and dissipation take place over a longer time period. A hard outer shell protects hypothetical life in the oceans from a harsh climate and a lethal mix of gases on the surface. "Impacts and solar flares, and nearby supernovae, and what orbit you're in, and whether you have a magnetosphere, and whether there's a poisonous atmosphere — none of those things matter," Stern told Space.com.

Any intelligent alien life that forms in these deep oceans would have to overcome a big hurdle to reach inhabitants of other worlds: drilling through that thick, protective crust. All that work would only get them to the surface — sending signals to other planets become even more unlikely.

For the past eighty years or so, we've been listening for signs of extraterrestrial life with  radio technology. The Allen Telescope Array, situated 470 km (290 miles) northeast of San Francisco, is one of the biggest — since 2007, 42 dishes have stood at the ready to scan the skies regularly in the hope of receiving radio signals from extraterrestrial life.

But what if extraterrestrial life doesn't operate on those frequencies? Attempts at contact could simply be passing us by simply because we don't comprehend the right wavelengths.

Instead of using telescope arrays and scanning the skies for radio signals, Duncan Forgan at the University of St. Andrews in Scotland suggests creating a galactic communications network. The same way we blink our high beams to send a signal to other drivers, we could use the shadow that Earth creates when it passes in front of the Sun to send a message to our fellow inhabitants of the universe. Forgan suggests that we build powerful lasers that contain those encoded messages, which are sent out as we pass in front of the Sun.

“If you want to communicate with someone on the other side of the galactic centre, there’s lots of stuff in the way – dust, stars, a big black hole – so you can take the long way around using the network,” Forgan tells New Scientist. Rather than letting intergalactic messages get lost in the vastness of space, civilizations in different galaxies could agree to use this "galactic communications network" to ensure their messages get to their intended recipients – a unified system to cut through the chatter.

We are Being Impatient

We've only been actively reaching out for alien life for about a century — a mere blip in the long history of the solar system and of the universe overall. Evan Solomonides, an astrophysics and mathematics undergrad and researcher at Cornell University, suggests that it could take a while — about 1,500 years from now, to be precise — before we hear from any extraterrestrials.

In a paper submitted to the American Astronomical Society, Solomonides examines the probability of finding life. "We predict that under 1 percent of the galaxy has been reached at all thus far, and we do not anticipate to be reached until approximately half of the stars/planets have been reached." Solomonides believes that we will have explore around half of the Milky Way galaxy before we hear anything, which will take a while since we've barely explored our own galactic neighborhood.

Solomonides is careful to note that the 1,500 years is not a deadline. “This is not to say that we must be reached by then or else we are, in fact, alone. We simply claim that it is somewhat unlikely that we will not hear anything before that time."

Editor's Note: This article was updated to correct the names of Saturn and Jupiter's moons.

Read This Next
From the Dept. of Things to Buy
Review: The "Out of This World Cook Book" Chronicles the Early Meals of the Space Age
FROM THE DEPT. OF THINGS TO BUY
5 Nintendo Space Games That Are Out of This World
Space Sick
Space Is Wreaking Havoc on Astronauts' Blood
Water Elemental
NASA Astronaut Says He Almost Drowned During Spacewalk
From Our Partners
10 Thought-Provoking Books That Give Us Insight And Understanding Into Our Future
More on Sci-Fi Visions
What is Happening
Wednesday on the byte
Elon Musk Sets His Twitter Account to Private
From the Dept. of...
Monday on futurism
The Best Humidifiers of 2023
Human v. Giraffe
Jan 24 on the byte
Chaotic Italian Fashion Line Baffles Facial Recognition Software
READ MORE STORIES ABOUT / Sci-Fi Visions
Keep up.
Subscribe to our daily newsletter to keep in touch with the subjects shaping our future.
+Social+Newsletter
TopicsAbout UsContact Us
Copyright ©, Camden Media Inc All Rights Reserved. See our User Agreement, Privacy Policy and Data Use Policy. The material on this site may not be reproduced, distributed, transmitted, cached or otherwise used, except with prior written permission of Futurism. Articles may contain affiliate links which enable us to share in the revenue of any purchases made.
Fonts by Typekit and Monotype.