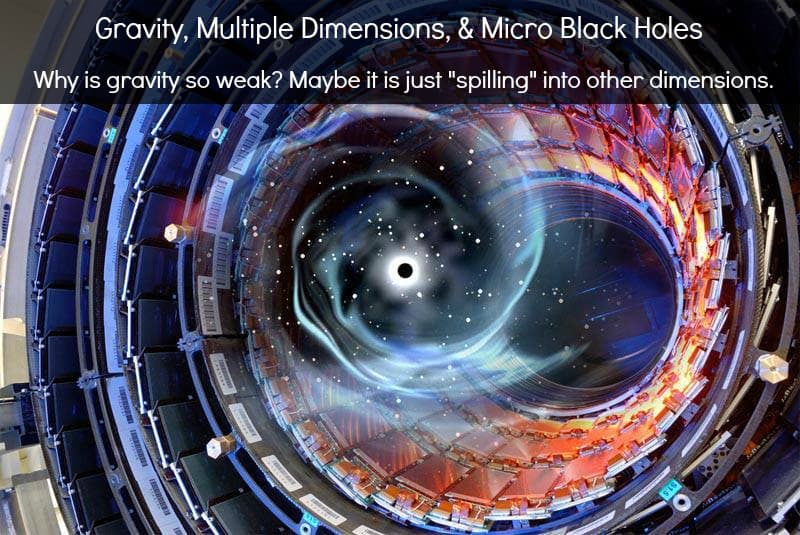 Of the four fundamental forces of nature, gravity is the most peculiar. It’s the most overreaching of the four forces, binding together structures hundreds of millions of light-years in diameter. Over ‘smaller’ distances, gravity is still king as it is the master of solar systems, the glue that holds them together. Yet the smallest magnets defy gravity with relative ease. Why is gravity so weak? For ages, physicists have been trying to answer that very question.

This is where gravity and other dimensions come together to form one of my favorite theories of gravity (simply because it’s a ridiculously cool-sounding theory). Hypothetically, gravity could literally leak or spill into other dimensions, that lost gravitational energy means we don’t feel the force’s full force. These dimensions could come in several different forms. One such hypothesis suggests these dimensions are smaller than atoms. Another idea suggests these alternate dimensions are the same ‘size’ as ours and just ‘stacked’ on top of and below ours. This could potentially help to answer two other preeminent questions about the nature of the universe with specific regards to the nature of dark energy and inflation.

From the dark energy perspective, if gravity is spilling into other dimensions of space, it won’t be as strong in our universe which would allow for the universe to expand faster than we originally expected. In addition, this leaking could also explain the nature of dark matter. If gravity is leaking between dimensions, it’s possible gravity from other dimensions is leaking into ours. “Dark matter” then becomes the gravitational footprint from objects in alternate dimensions.

How cool is that?

There is a problem though. Before we can prove any of these hypotheses, we need to determine whether other dimensions actually exist. At the moment, one of the best methods to test for alternate dimensions is to find particles that are predicted to exist in other dimensions. An example of such a particle would be particles in Kaluza Klein states. Basically, in the same way atoms have high and low energy states, particles have low and high mass states. A particle in a Kaluza Klein state exists at a higher mass than it’s normal particle counterpart.

Another test for higher dimensions would be to observe a graviton slip into another dimension. The primary way this would be obtained would be for scientists to smash a bunch of particles together and discover ‘missing’ mass. The missing mass would, hypothetically, be a graviton that has slipped into another dimension. Of course, for such an experiment to work, we first need to prove whether or not a graviton exists. A graviton is the hypothetical force carrier for gravity (in the same way the photon is the force carrier for the electromagnetic force). At the moment, gravity is the only force without a force carrier.

Another such method would be to utilize the power of black holes and create them in the laboratory. Grant it, they would be tiny, microscopic black holes with a life span of only 10^-27 seconds, but that doesn’t sound as terrifying. The LHC is currently the only accelerator that can produce collisions at enough energy to generate these little black holes. Scientists can then study their decay rate and patterns (as predicted by the Standard Model) which would allow them to probe the nature of other dimensions and other unknown regions of physics.