Imagining a World with 4 Spatial Dimensions

To understand just how difficult it is to envision a world with a fourth spatial dimension, let’s use a couple comparisons. First, imagine a color that doesn’t currently exist. Next, try to come up with a way to describe the appearance of a color like blue to someone who can’t see.

Not easy, right? We run into exactly the same problems when we try to imagine a fourth dimension of space. Even for those of us with the most powerful visual imaginations, trying to picture how a four-dimensional object would look in a three-dimensional world is impossible. Truly and utterly impossible.

Math can provide us with a little assistance in this area. You see, to a mathematician, the fourth dimension can be represented using coordinate geometry and vectors within an algebraic four-dimensional space.

Of course, this is only an extra direction written down on a two-dimensional piece of paper…not an actual dimension. In this sense, the coordinates would be treated in exactly the same way as the other three directions, so it doesn’t actually add anything new to our understanding.

Still, coordinate geometry helps us grasp just how difficult comprehending a fourth spatial dimension is for beings like us who live in a three-dimensional world.

In short, understanding a world with four spatial dimensions is exceedingly difficult, but what fun would we be if we didn’t try?

One of the most effective ways of explaining this elusive dimension is to use a sequence of hypercubes, starting from the zeroth-dimension leading up to the fourth dimension (so five separate dimensions overall).

Our first hypercube (we’ll call these “HC” for short) is the 0-HC. It occupies no volume because it doesn’t have width, length, or depth. As a result, it is effectively an infinitely small point in space.

This idea is used a lot in physics and mathematics to simplify scenarios and to develop equations. For example, when using Newton’s laws to create an equation for the pressure of a gas in a container, particles are assumed to have no volume. You will have also used this principle when doing even the most basic geometry in mathematics. When plotting a coordinate, before you join it up to any others, you have (in theory) created an infinitely small point in the zeroth-dimension (of course, your pencil could never be sharp enough to literally do this). 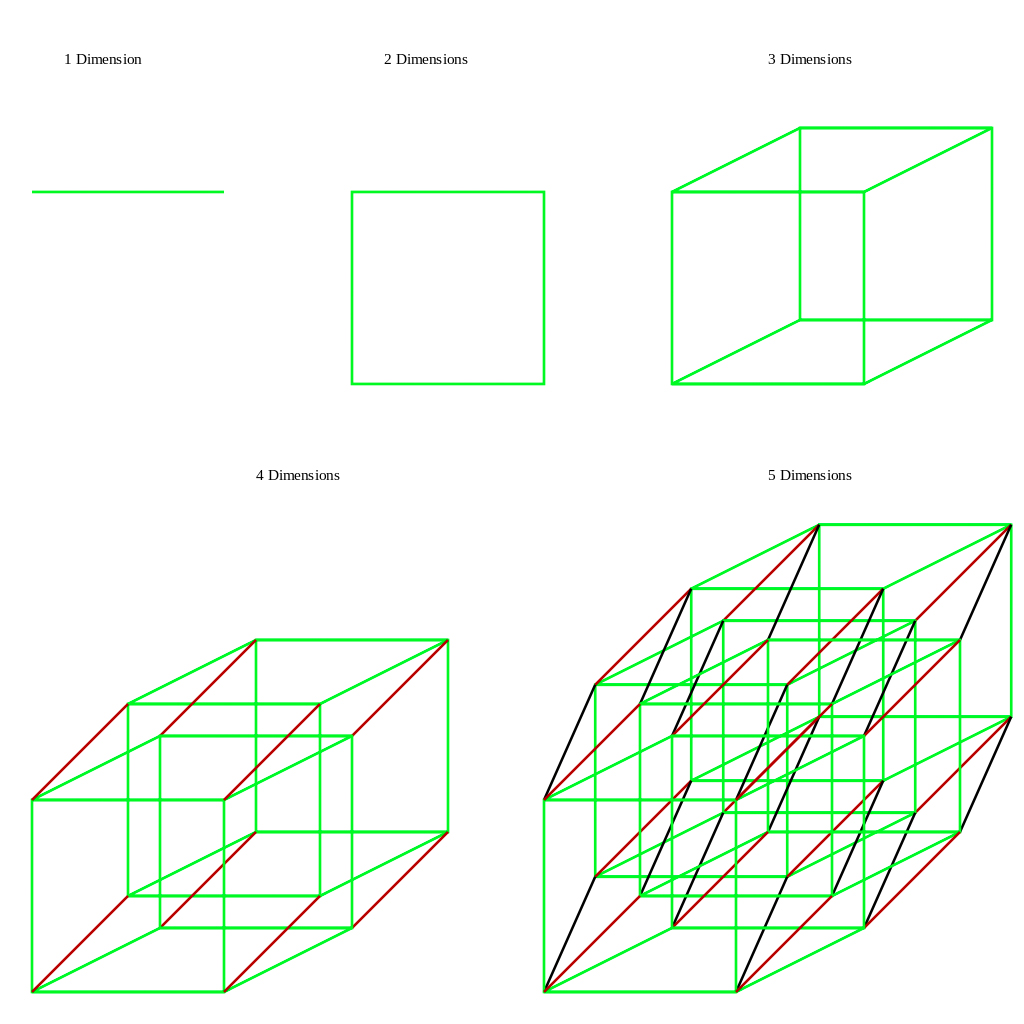 Next, take your infinitely small point and extend it in a single straight line in any direction. Now you have created a 1-HC. The dimension still has no width or height, but you have given it length, and in so doing, you have put it into the first dimension. In theory, if you drew your new line in an infinite direction, you would actually create an entire one dimension.

After this, take the 1-HC and extend it again. This time, extend it perpendicular to your original direction to create a plane. Let’s pretend you made a square. This new hypercube is now in the second dimension because it is able to differ in two measurements: width and length. We can call this the 2-HC, and similarly to your 1-HC line, if you expand the square infinitely, you would create a two-dimensional space.

The only direction left to expand our hypercube in is height. You couldn’t do this on paper, of course, but if you have access to some 3-D computer graphing software (for example, Autograph), you could try it. To do so, you must generate your 2-HC and then raise it into the third dimension to create a cube.

The width, length and height of this new shape can be measured, and all of its angles equal 90 degrees. Again, this can also be expanded infinitely to make a whole three-dimensional space, and this is obviously the dimension in which we humans live.

Here’s where we start to explore the unusual. Try to imagine a fourth direction. Honestly have a go at it for a few seconds.

Can’t do it? We have no more option for expanding our hypercube in our three-dimensional world, but it can be done in the fourth dimension of spacetime. We call this a tesseract.

There are several ways of trying to illustrate this expansion, but they would be very difficult to explain in this article. Instead, I will take a practical approach, but it is interesting to ponder this fourth expansion, and there are some good motion graphics on the web if you give it a search.

Now, picture yourself looking down on a piece of paper and imagine that this piece of paper is home to a world existing only in two-dimensional spacetime.

Even though the second dimension exists within the third dimension, beings within this two-dimensional spacetime would have no idea you exist because they will have no comprehension of another direction of space — they couldn’t look up to see you because “up” is not a concept they can fathom. It is easy for us to say “height” because we experience height, but remember how difficult it was for you to think of a fourth direction?

If you poked your finger through their world, it would just appear as a flat disk with no height when viewed from the side. Also, if they were on the outside of a square with a dot inside,  you could quite easily reach inside that square and pull out the dot. The two-dimensional beings would have no idea how this was possible because, to them, you just somehow passed the only dimensional boundaries they know of. You would be able to do this because the second dimension has a cross-section through our space.

I know that this may be a bit confusing, but it is useful for imagining how a being that existed in the fourth dimension would appear to us. We couldn’t say quite for sure how they would appear, but I was once told they would look like “a bunch of skin blobs.” The 4-D creature would be able to see everything in our three-dimensional space because they would exist outside our boundaries and would also be able to see inside any object.

This would be gruesome, but they would have the power to see inside your body and remove any one of your organs without ever having to penetrate your skin. Just as you could remove the dot by pulling it into your dimension, they could do the same to you (possibly some kind of revenge in a 2-D/4-D alliance?). Similarly, these creatures may well exist in our own universe and can live here without detection, but again, we would never be able to see them, just as two-dimensional beings could never see us.