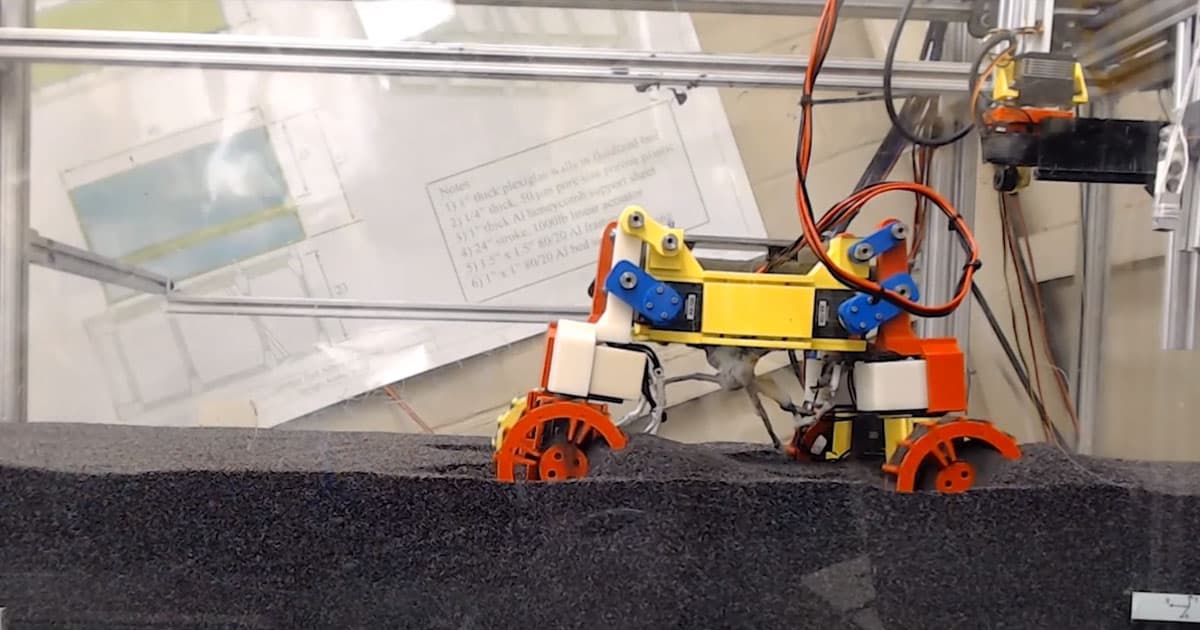 This Wiggly Mars Rover Is the Silliest Thing We've Ever Seen

Now these are some dance moves.

Now these are some dance moves.

To a hapless Mars rover, getting stuck in a slippery sand trap can be a death sentence. That's what happened to NASA's Spirit rover ten years ago: its wheels got trapped and the robot was immobilized until it eventually ran out of power.

To prevent that from happening future exploration robots, The New York Times reports that engineers from the Georgia Institute of Technology are testing rovers that vibrate intensely to avoid becoming ensnared by alien landscapes.

In order to keep future rovers moving, the engineers are programming prototype robots to shake, gyrate, and army crawl across the top of sandy terrain — which they simulated by filling a glass tank with poppy seeds, according to research published in the Science Robotics on Wednesday.

"This combination of wheels and paddling and lifting, if sequenced properly, is really powerful," Georgia Tech physicist Daniel Goldman told the NYT. "No longer just wheels at the end of sticks but they are actually active appendages, and I think that’s exciting."

Not only can the bizarre dance prevent a sandy death, but the NYT reports that it could enable next-generation rovers to explore previously-inaccessible regions of Mars, like loose-terrained inclines.

"When you only have wheels," Goldman told the NYT, "that limits your ability to go anywhere."

More on rovers: The White House Is Trying to Shut Down NASA's Last Mars Rover

The Other Left!
A Guy Who Drives NASA's Mars Rover Is Dishing About the Experience
12. 23. 20
Read More
Hammer Time
Crap: NASA's Mars "Mole" Finally Started Digging, Then Hit Another Obstacle
7. 8. 20
Read More
Mars Copter
Here's NASA's Ingenious Way of Testing Its Mars Helicopter
6. 23. 20
Read More
+Social+Newsletter
TopicsAbout UsContact Us
Copyright ©, Camden Media Inc All Rights Reserved. See our User Agreement, Privacy Policy and Data Use Policy. The material on this site may not be reproduced, distributed, transmitted, cached or otherwise used, except with prior written permission of Futurism. Fonts by Typekit and Monotype.